Knowing the exact exhaust port temps during roasting would be good to know. I assume it would be similar to the drum temp and during my initial drum seasoning roasts the temps exceeded 450F according to the digital read out. The exhaust port must definitely hold up at these temps as a lot of smoke is generated at these temps and my nylon one did not filling my shop full of smoke. I would rather not go through that again and hopefully the heat resistant resin adapter I’m having printed will eliminate the problem.

The technical data of the heat resistance of materials used in 3D printing does not support the temps created by the Bullet. Molded plastic parts are different.
My apologies, it was not your company that had never printed an exhaust adapter, it was one of your major distributors. 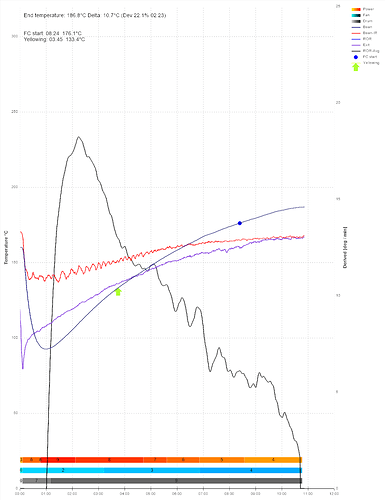 I printed a Stainless\Bronze exhaust adaptor for $183 USD through Scupteo. Received a fairly high number of recommendations and quotes from a variety of vendors, this was by far the most reasonable. There was a little shrinkage in the part when printed due to the Bronze sintering process. Might suggest a edited version of the adapter for better fit, starting with 1 mm increase in size. I Have some tape designed to masking and use in oven related temperatures I will be using to obtain a airtight fit on the model I had printed.

13 roasts in and the ASA adapter while dirty, still looks as it did when i printed it. No smoke leakage at all when I roast. Would love a metal or molded adapter but the price is too much. If the 3D printed one ever goes, I will just print another.

keep us posted on the HT resin!

3M manufactures a Fire Block Sealant FB136 tested up to 750C. It comes in a standard caulking tube. Nashuatape.com manufactures a stretch and seal self-fusing tape tested to 500F. I purchased both at Home Depot and I plan on using them to seal my exhaust port adapter.

Thank you for the ideas, I will keep these in mind. The tape I was thinking of using would wrap around the square side of the adapter to make sure it naturally gets a positive seal onto the roaster ‘pipe’. The same method would be used to provide a tight fit into the exhaust tubing that vents outside. Want to use rigid pipe versus flex tubing for future venting/ filtering idea.

Anyway, the tape is very thin and stable to 400 C. I have a bunch left over from a project I was working on. It’s pricy stuff…not sure I would use this if it wasn’t laying around. It’s called Kapton. Here is a Wiki all about it https://en.wikipedia.org/wiki/Kapton

I used this around the outside square of the exhaust adaptor to snug up the fit.

Hello all Has anyone measured how hot the exhaust gets for a average medium to Dark roast? I just printed my from abs plastic.

I haven’t measured the temps, but my ABS adapter had a very short life. I’ve gone to a DIY hood setup with an exhaust fan, at the advice of Aillio. (I think it was Jacob, but I don’t recall for sure.)

I’m kinda surprised by all the people that have had problems with 3D printed adapters using ABS. I used Proto Pasta’s CF (carbon fiber) PLA and it’s been on my Bullet now pretty much since I got it, no problems. I’m running a straight up 4" vent that drafts well, maybe that’s the difference?

I used ABS…no problems. Annealed though…

I finally remembered to take a few temp samples of the exhaust port while roasting yesterday.

I have a 3D nylon printed adapter, and a 3 inch flexible pipe…all of the temps I took with a laser infrared thermometer showed temps on the adapter and pipe under 120F while preheating to 230C and roasting as high as P8.

My adapter looks good as new after 84 roasts.

I have been using my new Heat Resistant Resin exhaust port adapter with 3" exhaust pipe.
So far so good. During my last drum seasoning roast the drum temps reached 493F. No distortion of the adapter at all. Very happy with the results. I siliconed the adapter to the non removable side at the port to prevent smoke from escaping.
My logic in using 3" pipe instead of larger diameter was that the exhaust fan would perform better with less volume of air to move through the pipe.

I think this is incorrect.

The fan is rated at a certain flow rate, I believe the fan I the Bullet is rated at ~97 cfm.

A smaller diameter pipe will create more resistance to the fan. If you make the diameter smaller, it has to push the same volume in the same time through a smaller opening, which means higher pressure, higher linear velocity…which means the fan actually has to work harder. If anything the, fan won’t be able to push the rated volume due to the increased resistance.

Interesting. I thought less volume in the pipe would produce more air flow.

Ebae makes a good point in general physics, but I don’t think a 3" pipe is too limiting for the Bullet based on the size of its own internal exhaust pipe and the exhaust outlet. My Bullet has been fine using a 3 inch pipe for 92 roasts, so far, and more today. Happy New Year!

Using a 3" duct vs a 4" duct is ~44% reduction in the cross sectional are of the duct… I don’t remember enough fluid dynamics to be able to tell you what the impact is to pressure drop and linear flow rate, but guessing the linear flow rate would need to be ~78% faster with a 3" duct, and pressure drop would increase at a multiple of that 2x or 4x…not sure.

An easy test would be to see what the fan RPMs are at several set points with and without the 3" duct attached…or even better, using a 3" vs. 4" duct, but it will give you an idea as to whether the ducting has an impact on fan performance.

I do know that the fan RPMs will change with and without the trier installed and with and without the charge plug in place…which tells me that on the vacuum side vs. the exhaust side, the fan is impacted by the available inlet cross section available. With trier hole open or charge plug not installed, the fan RPMs drop, but the impact was rpm ably 10-30 RPM depending on the set point.

Interesting. I thought less volume in the pipe would produce more air flow.

I’m decades past my ability to provide the numbers to substantiate what follows, so this is just a generalization of what happens to air flow in a duct…

So a rule of thumb would be to use the largest diameter duct you can fit with the smoothest possible interior surface, the fewest obstructions, and the fewest turns/angles/twists. In the extreme you could us a 10" sheet metal stove flue with as few joints as possible, but the improvement between that and say a 4" sheet metal flue would likely be so minimal it would be a waste of $$$.

Alternate to filling your roasting space with large diameter ducting is to insert an in-line fan in the duct, e.g. drier host ducting, to compensate for any duct-induced back pressure. If you choose this route you are at risk of affecting the thermal differences created by setting Fan speed. So a system that allows ambient air to mix with ducted air will cause the least change in flow rate inside the roaster for a given F#.

Compare that to the typical blade fan, e.g. the muffin fan in the Bullet cooling tray. Blocking the outlet of a blade fan produces maximum load on the fan and that causes motor speed to drop- exactly the opposite of a centrifugal fan.

The only real way to be sure what is happening when motor speed changes in the exhaust fan is to use a separate flow rate measuring device (and yes, that can restrict air flow through the exhaust fan). In the bad old days we installed a “feather” in the path of cooling air inside electronic equipment enclosures. The feather was a lightweight piece of plastic the was pushed aside by the airflow. The displacement of the ‘feather’ tripped a switch which enabled the rest of the equipment to power on; no air flow, no power to the equipment.