I’m not sure I understand the significance of this. I went back and looked at numerous roasts from my Phoenix Oro, which I use Artisan exclusively, and the turn is auto marked in each one just past the one minute mark. RoR doesn’t even start to show until around the 1:30 mark. and it’s a vertical line until it peaks. I can tell on the Bullet when the turn takes place by watching the digital RoR change from negative to positive. Doesn’t affect my roast other than digital entertainment. Am I missing something here?

Honestly, I don’t think you are.

The point I was trying to make in my posts today was that, if Aillio made a wholesale change in the source data for ROR (from the traditional bean probe to the IBTS) the data at the beginning of a roast/around the turn would be different enough that it could throw off or upset users who are used to, or making decisions based off of, the way it reads now.

It’s a solve-able problem, and what I’m coming around to is I think just a better understanding of the non-technical complexities involved in making what seems like a simple technical change if that makes sense.

The turning point is mostly “graph entertainment” and not significant. Frankly, learning to roast on the Bullet without a PC connected at all would be what I’d recommend. That’s because in all my years of roasting and participating in forums, many times I’ve seen people get wrapped up in numbers and parroting things rather than have actual roasting knowledge that comes from just doing it themselves.

So for me, the RoasTime graph is mainly a visual representation of what I did during the roast using the Bullet’s front-panel data and checking the beans. I’m used to working with a count-up timer and actual bean temperature (via thermocouple) to know if I need to speed or slow a roast. I’ll glance at the graph mostly for visual entertainment while I’m waiting to make my next manual adjustment.

IBTS or not to IBTS? Answers? Questions! Questions? Answers! (quote: one of the instrumental songs of our famous Dutch group “Focus”).

In my search to prove the advantage of the IBTS, I roasted 500 and (yes, only) 200 grams of the same coffee. At the start it’s useless to compare the ROR-measurement of the IBTS and beanprobe (BT). But after the start (the more important part of the roast) the ROR between IBTS and beanprobe (BT) is almost the same from both roasts. Why did I ever purchased the IBTS as the ROR differs only slightly? See the graphs of the two roast below.

My friends of this wonderful machine, do we need an IBTS? 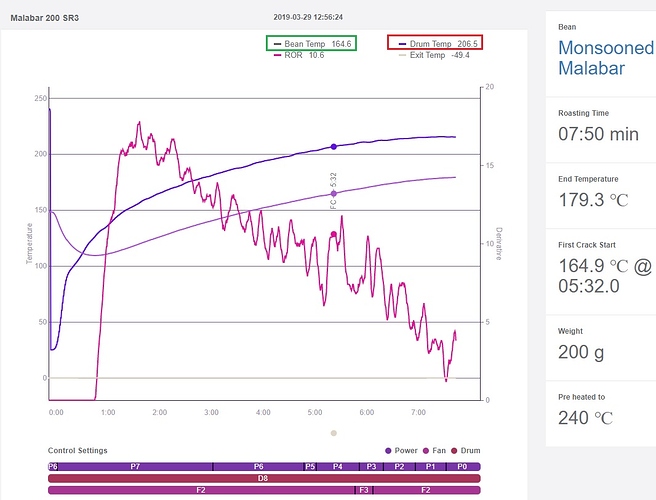 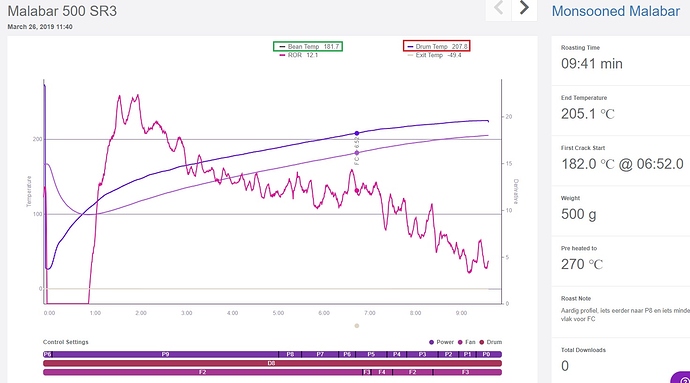 the end temps are different, guess the advantage is that the end temps are very similar doesn’t matter on bean weight. 200 gr is not enough due drum volume for this try min 300 350 and then compare to 500 gr or what ever.

In the future we will offer the additional ROR from the IBTS. We already have it running but want to improve the data before we release this. The data needs to run through a new prediction filter that we are not finished designing, otherwise the data will be too noisy. Not an easy task.
The benefits of the IBTS are many. Much much faster to react and consistent across all batch sizes.

Hello Jacob, do we have any update regarding IBTS ROR? Can we rely on it now and ignore Bean Probe ROR? Here is my recent roast. As far as I can see, there is not much noise in the data. Please confirm. Thanks!

Hi. I think the I-ROR is pretty good yeah.