I want to share a roasting method that has produced enjoyable results for me on a Bullet v1.5.

Start with soak at P6 for 1 minute, F2
Increase to P9 and F4 until 190C
Decrease to P6
At 16% increase fan to F5
Increase fan as needed to maintain smooth declining RoR

This is my simplification of the master classes from Rao and Hoos.

Always interested in seeing how other people are roasting. Can you post a screenshot of a roast profile?

Thanks for posting that. What’s your charge weight and preheat temp?

Sure, here’ s one from today 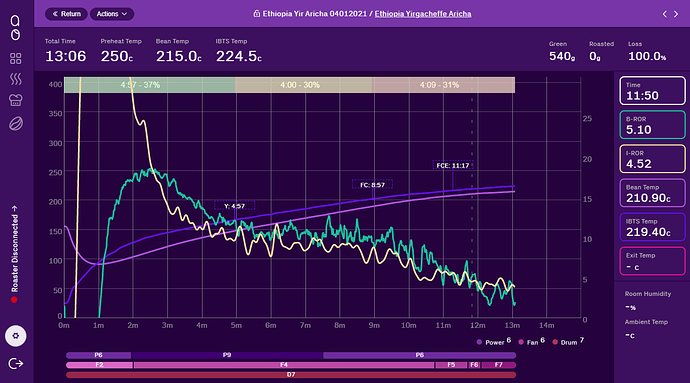 Thanks for the share. This looks interesting to try. It looks like your “soak” at P6 is actually 2 mins long in this profile.

You are very observant

yes indeed, it is 2 min here, I usually do 1 min, but it was a combination of suddenly colder weather (I roast in a garage) and losing focus for a short time. The result is good, still degassing, so I will properly test later today.

Good to hear, although I don’t think an extra minute would make a huge difference in the results. I plan to try replicating (manually, partly because I still haven’t figured out how to do recipes or overlay in RT3 and there is no proper user manual) your profile and one of bradm’s on some beans that I have 2lbs of to play around with.

By the way, I was looking at your other roasts on RW, which supplier did you get the Lanna beans from? I know Sweet Maria’s don’t carry Thai beans. How are these specific beans? I usually get them already roasted when I go back to Bangkok (I rarely make it up to Chiang Mai area where most Thai coffee is grown).

Burman coffee traders. It’s quite good. I’ve never been to Thailand, would love to one day.

Very curious how your roasts turn out. I also do everything manually, although overlay seems to be easy to do, you just choose that from Actions drop down menu.

Thanks … I had checked out Burman but haven’t bought anything from them yet and did notice they have Thai beans. I also found another who has green beans from Vietnam and Philippines: Single-Origin Green Unroasted Coffee - Len's Coffee In case you’re interested. I haven’t bought any yet.

I’ll let you know how it turns out. I’ll be roasting tomorrow morning (that’s the plan at least).

@blacklabs Overlay is easy and really useful. Just open any roast from your Roast History, then use Actions>Overlay to make that roast the overlay. A pop-up tells you Overlay Started, which you can just dismiss. Notice that while overlay is active a semi-transparent black button is displayed at the lower left of the screen “Cancel Overlay”. You can use that anytime to turn off overlay.

Now use Return to go back to the main page. You can play with overlay to see what it looks like by opening another roast. Or you can go to the Active Roast and the overlay roast is displayed in the background. Getting an overlay going gives you something to do during preheating.

Overlay is addictive. Once you use it, you can’t live without it

So @bradm it doesn’t look like I can do an overlay using someone else’s roast? I didn’t see an option to do that in RT. I can overlay one of my own.

This 300g Peru roast I did this morning I tried to manually follow this roast of yours.

I followed @util’s 696 profile above for a 300g Peru and for a 510g Yemen. On the Yemen I modified it a little bit. Clearly on the Peru roast following util’s 696 profile it roasted quicker given the smaller batch size of my roast. I think it came out at last C+.

I’ll cup them tomorrow and see how it is.

Note that on the Peru roast following util’s roast profile, something happened with RT (v3.1.4) on that roast. That was the second roast and the software froze doing a back to back roast - I had to restart it after I charged the beans that’s why the graph is cut off at the beginning. It froze during the preheat of the 3rd roast so I restart it during the preheat to ensure it would capture my 3rd roast properly.

You can overlay someone else’s roast by viewing it in roast.world and clicking “save”. That adds it to your Saved Roasts and also downloads it to RT. Then in RT it behaves like any other roast, except you can’t edit it because it’s not yours.

Here is your roast with mine as an overlay. The combination of different charge weights and different bean types probably led to the significant differences in temperature curves, but your roast looks good anyway. Hope it cups well! 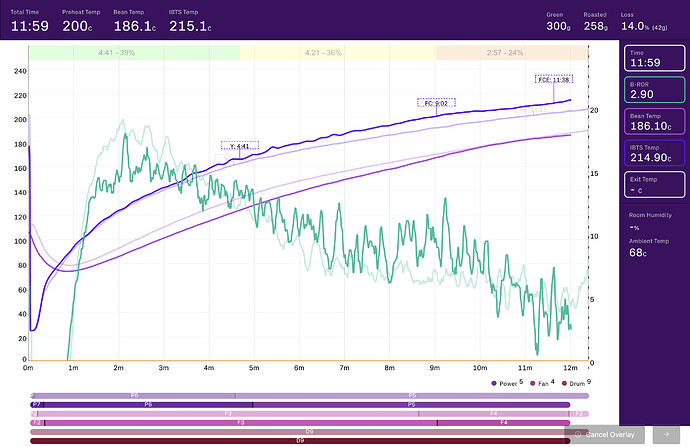 Thanks @bradm for yet another overlay 101 tip.

Just cupped the three roasts. The two Peru roasts where i tried to follow your and @util’s profiles came out differently. Following yours seems to results in a fruitier and almost tea like cup while util’s profile had a nutty and milk chocolate cup.

The Yemen one I think needs at least another 24 hrs degassing, but I was picking up some dark cocoa and roasted hazelnut with a rustic edge to it.

Ditto. Between Overlay and sometimes Playback, I’ve not found it necessary to use Recipes except to try it.

I do something pretty similar, but I start at a higher P value when I get turnaround (which is pretty much 1min, I just go about it from a different angle) and then move down to P6 over a span of 20 or 30 degrees from before Yellow to before FC and slowly move the F value up from somewhere between Y and FC to drop.

I haven’t taken the Rob Hoos class, I think I got on this track from the John Plato method he posted early on to the Facebook group and I modified it as I learned.

I’m not sure what you mean by 16% and I’m curious what the difference will be if I make greater P and F changes versus the gradual, I’ll give it a try.

I’m also in a garage and have to adapt a little to environmental temps so I feel safer with one step changes that I can go to faster or slower depending on the day and where I am in the number of roasts. Thanks for posting this.

@wngsprd - ditto here. Since it is imperative for you to be around while roasting to press some button from time to time just to prevent the deadman’s switch, Playback and Overlay, I feel, better compensates for varying environmental factors, voltage, chaff filter state, bean/ibts probe cleanliness, moisture levels from one roast to another.

Woah, I’m surprised that such a dip in power didn’t change your RoR.