Hi all, I wonder if what I’m seeing is normal/ok/undesirable

I have been doing 900 gram roasts recently. I notice the bean probe and IBTS curves cross at some point during first crack— the bean probe showing higher temperature than the drum. On all my smaller roasts, IBTS is several degrees higher than bean temp for the whole roast.

I preheat to 290-305° C and start at P9/D9, I keep the power high for most of the roast. Here’s an example (its yummy, no complaints): Roast World - Cup, grade, and analyze your coffee roasts in depth

I’m wondering if this profile is to be expected for large roasts, or if perhaps I’m not using the best fan/drum settings. I don’t think I should increase the preheat very much because I’m already getting some surface scorching— I think that’s from when the beans are charged in a very hot drum.

Just seems odd to me the lines would cross (maybe it’s an illusion? the bean probe is not exact and all that)

thanks for your time and thoughts! 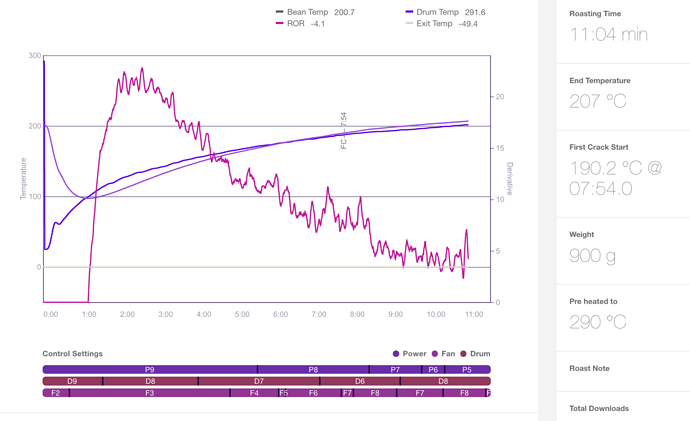 re: Drum Temp crossing below Bean Temp… odds are pretty good that your IR sensor lend needs cleaning, Below is a roast of yours from 12/21/2019. Note the 2 lines don’t cross even after 2C started. 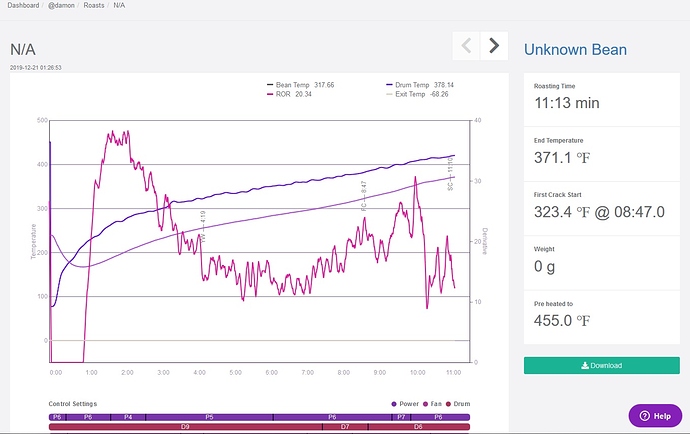 I use a checkpoint of the difference between Bean and Drum Temp at Bean Temp of 300°F (you can use any temp early in the roast before 1C). In this roast that difference is 63F°. When my roaster was new I saw a similar temp difference. Now after almost 20 months of use the greatest difference I see is about 45F° right after the sensor is cleaned. When that temp difference creeps down below 40F° I know it’s time to clean the sensor [remove and support the front plate; clean the crud off the inside of the plate and the Bean Temp probe with something like Simple Green; use a cotton swab saturated in alcohol to clean the view port and then the lens on the IR sensor.] Takes several passes with clean swabs. Don’t be surprised if you don’t see anything on the swab! I’ve never seen evidence of contamination, but cleaning always makes a difference.

Even if you use Bean Temp exclusively for tending the roast you need to keep the IR sensor clean because that’s what the Bullet uses to set Preheat. Contamination that reduces the displayed Drum Temp by 40-50F° means the Preheat temp is higher than you think it is by that amount.

Btw, keep track of the spacers on the front of the drum shaft when cleaning.

Thanks, Bruce. I should have mentioned I cleaned the sensor a few weeks ago, didn’t notice any change.

The older roast of mine you linked to was probably 500g. I can tell because the preheat on that roast was 260°C. These 900g roasts I’m preheating closer to 300°.

So I was preaching to the choir! Mea culpa!

I’ve had to clean the sensor lens several times with a clean swab each time to see an effect. Never have seen anything on the swab but still get a change. So I really have no idea what underlies the effect we see.

Perhaps there’s a drift in the calibration of the sensor over time (aging effect) as a result of the heat from roasting. Certainly the calibration on mine is different compared to new. And it appears yours as well. I preheat to a lower temp which adds a variable in comparing the 2 roasters. Just speculation… ??

I’ll give it a good cleaning tonight just to be sure.

So I cleaned the inside of my roaster for the first time a few weeks. The IR sensor was definitely dirty. After cleaning, I’m seeing higher temps and the curves no longer cross. I think you had it exactly right, bab! Thanks!

How and when did it get so dirty? I’m not sure. I did make two errors in the past few months.

Once I had a roast where the fan stopped spinning (I had mounted it a little too deep). Smoke came out of the front of the machine for a few seconds; I dumped the beans as soon as I realized something was wrong. Lots of beeping. I cleaned after that, maybe not well enough.

The other fail was something I’ve done maybe twice before. I forgot to put bean chute plug back on. Some smoke came out the chute and trier, not very much.

Attached are some before and after pics. I cleaned the IR sensor with alcohol (which I have done in the past). I was more careful this time, I noticed didn’t get all the grime off with my first try. 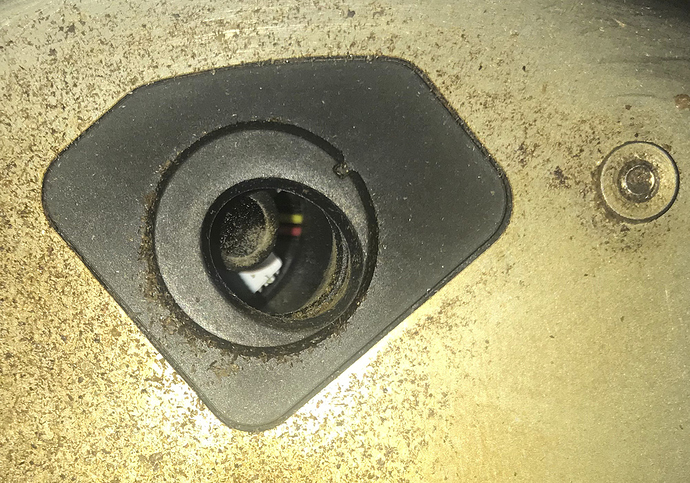 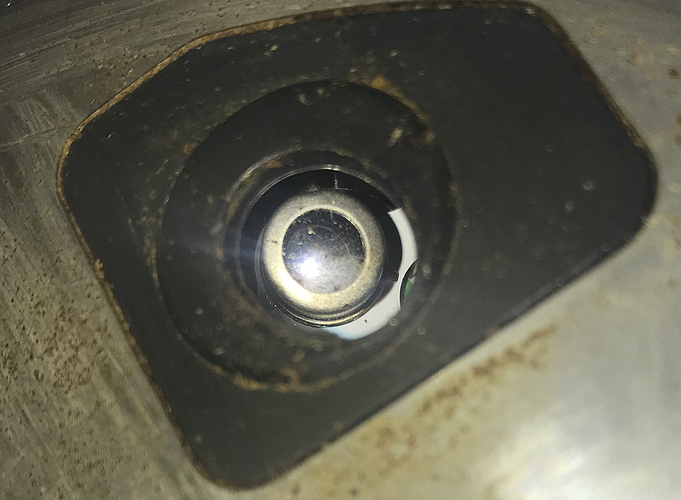 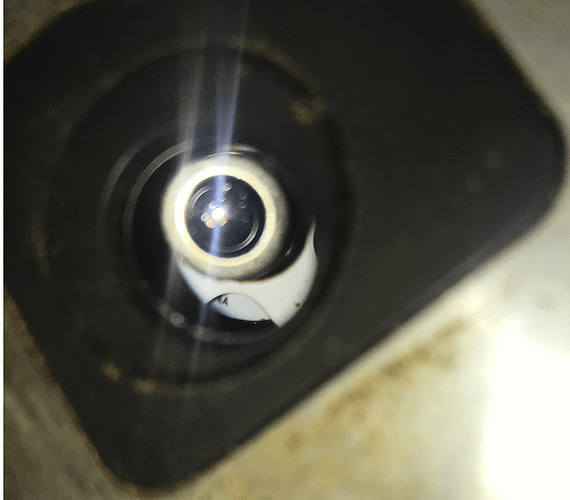 Great job imaging with the fiber optics to show the dust (I guess that’s what it is) on the sensor and the viewport. Anything that gets in the way of the IR emissions from the beans or drum blocks what the sensor can collect and reduces the resulting data from IBTS.

At least you had something you could see so you could attack it and get rid of it. I’ve never seen anything either on the lens or on the swab. @johnrathwell speculated it was from white smoke residue pulled in by the IBTS fan in the Control Panel pedestal when we dumped the beans. That smoke could then blow past the IR sensor and ultimately into the drum. Until I hear something better I’ll have to stick to that.

Btw, the dust you imaged is different from what I see collect on the inside of my roasters front plate. What I get is pretty sticky stuff with dust & smoke particulates stuck to it… more like vaporized oil from the beans. What you imaged looks like you might even be able to get it off with a brush… ?? Guess it’s a difference in the beans and roasting temps.

That dust was stuck on pretty well, actually. I think it was from oily smoke.

Ah-hah! Looked light and easily brushed away. Glad I asked.

Hi Damon, can you tell me your BT when you get the charge notification. I use a fan below the PCB housing to cool it and it appears to affect the BT temp at charge.

After cleaning my IBTS sensor: Roast World - Cup, grade, and analyze your coffee roasts in depth

I ignore BT until the turning point.

The BT temp is the air temp in the drum, maybe your fan is adding cool air. (edit: actually, I have no idea what’s going on.

Hey guys,
I’ve been having the same issue but the manual says the window only needs to be cleaned if you have a V1. I see damon has a V2 as well, so is the manual wrong?
Owen

My V2 IR sensor was definitely dirty. It had some oil and smoke stuck to it. After cleaning, my IR temperature readings were normal again.

I had a roast where the exhaust fan stopped (I mounted it incorrectly). Lots of smoke came out the front of my roaster, maybe that was part of it.

Now I clean it every time I remove the front. (20 roasts?)

My experience is similar to @damon … clean the IR lens about once/month. I’m roasting 5-8 batches of 550 gm per week. By the time I clean the sensor the temp drift/change is very noticeable.

Might be worth logging the date in your roast Comments when the sensor has been cleaned in order to keep track (some advise I need to follow myself!).