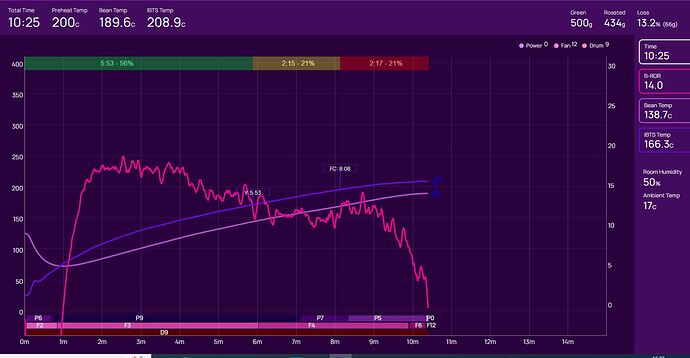 Hey. This thread may be useful to you.

Why does the IBTS read about 30 degrees F higher than IBTS? If they are both measuring the beans, shouldn’t it read the same?

You’ll see IBTS & B-Temp draw closer together after 1C (abt 400°F) then all the way to 2C (443°F-447°F). The 2 temps will likely have a difference on the order of about 10-12F° at 2C. The difference is caused in part because the probe is mounted to the face plate. That provides a path for conductive losses (probe sheath to the face plate to the ambient room environment) which creates an unavoidable measurement error. That error is not of real consequence in the larger scheme as you become familiar with the repeatability of the 2 readings.

The main concern in preserving repeatability is related to the IBTS. The IR sensor of the IBTS can get a bit of roasting crud on the clear glass cover of the sensor. That crud needs to be removed periodically. To know when, I track the difference between IBTS and B-Temp during the roast at about IBTS = 240°F to 280°F. I’m looking for the greatest difference between IBTS & B-Temp (doesn’t matter where it occurs- the difference is greatly affected by batch weight so is unique to roaster/preheat/batch weight; I just look for the greatest difference). I note the temp difference after the cleaning; when that difference gets smaller by ~10% , it’s time to for me to clean the IR sensor again (alcohol + cotton swab). You probably won’t see anything on the swab but it does make a difference if you’ve done a good job cleaning. Btw, I don’t try to note the temp differences/changes during a roast- I do it all post-roast.

Fw 606 introduces a low exhaust fan setting during Preheat mode to reduce contamination of the IR sensor of the IBTS. From what I’ve seen it does in fact make a positive difference (well done Aillio!). From RT4 fw change log-

Great, thanks so much Bruce, that was really useful. I will definitely keep an eye on difference in the 2 sensors going forward. Really appreciate it. Peter

Excellent, thanks James. That was a really useful thread and answered my question. It is also confirmed that if you roast smaller batches, you are more likely to have a larger difference a the beginning and possible at FC which is what I saw when I reduced my sample size to 250g from 500g. Really appreciate the response. Peter