Approach to generating a declining ROR

For the sake of example: let’s say I wish to hit first crack b/w 8-10mins and target an IBTS temp of Xdegrees by end of roast, how would I use these data points in planning what ROR I need to start out with by manipulating power and fan to provide enough momentum so I have enough room for a “declining ROR” by the end of the roast?
What happens to me now is that I “run out of room” and my ROR goes to near 0ish before I hit my exit temp so my roasts are usually baked.
Thus, the question of how one aims for a particular ROR range to start out with which would guide the settings of Power and Fan to hit those levels.

I think the direct answer might be that you need to experiment. That aside…

You have more than Power and Fan available to you for managing RoR. Drum speed also affects RoR directly especially during the late stages of the roast. Roasting 550 gm batches, I use a lower drum speed to increase RoR; conversely a higher drum speed to do the reverse. A lot of things affect RoR besides power and fan including batch size and room ambient so nothing will replace experimenting.

Also Preheat temp significantly influences the slope of RoR and causing the peak value to be higher. To follow Rao’s guidance you have to get that peak high enough to have room for the decline to less than 10F° at the end of the roast. Without enough stored heat the roast may stall at the end as measured by IBTS; some call that stretching the end of the roast and consider it a positive thing. Take your pick.

Another interesting phenomenon is that the spread between Bean Temp and Drum/IBTS Temp decreases as batch size increases which makes it unclear to me which value is more accurate when trying to determine the end of the roast. I arbitrarily decided to use IBTS and that BT was influenced by the mass difference, but I really have no idea if that’s the right interpretation.

Here’s one suggestion: allow yourself the liberty of changing the slope of your declining RoR after you’ve made it past FC. This splits the roast into two parts, pre- and post-FC.

During pre-FC you’re trying to hit Yellow within a reasonable time and establish enough momentum that you can back off power to avoid a spike in RoR at FC.

After FC, you’re trying to avoid a crash, manage an often-wildly-oscillating RoR, and make it to your target drop temperature while avoiding a last-minute spike in RoR.

If you can avoid all these spikes and crashes, seems like a declining RoR with a bi-linear curve is a win. I’ve been pleasantly surprised a few times to find the two slopes aren’t that different, and the whole RoR curve looks pretty linear with one eye closed

Using RT3’s playback feature to start a roast and making corrections on the way has helped me fine tune my curves over multiple roasts of a particular bean.

With a declining ROR in mind, I think, we often try and counter every upward ror movement by decreasing P or increasing F. That leads to the momentum being lost due to over correction. For most beans, in my own experience, there are some temperature levels that can make the curve go awry, say, 145℃, 160℃+, and so on (including one just prior to FC). So, rather than correcting ever single nuance of the ROR, looking out for these major ones has helped me achieve a flatter but decreasing ror curve, leaving me with enough momentum at FC to achieve my desired roast level without any unnecessary lengthening of the roast time.

Having done multiple roasts of a particular bean, going back to roast analyzer does help in identifying the temperature zones where there are big ROR movements (differs from bean to bean). Keeping track of those helps a lot.

Agree. With a declining ROR post FC, it is quite a task achieving SC within a reasonable amount of time especially with a big batch size.

Thank you @bab , @bradm , @cash0612 - I now have a concrete action plan…including utilizing drum speed, implementing the bi-linear curve and using playback…
It seems also that having an AI system where you input your desired parameters for FC, drop temp and it calculates the ideal slope of ROR for you and making micro adjustments along the way to keep it declining might be the holy grail, but certainly not as fun as landing on it ourselves

Agree. With a declining ROR post FC, it is quite a task achieving SC within a reasonable amount of time especially with a big batch size.

I used P9 to roast but learned when trying to manage the end of the roast that there is no substitute for having some gas left in the tank. Hence max power is now limited to P8. Don’t think this would work with 1 kg roasts. (Then I discovered drum speed vs. RoR and got lost in the information-jungle!)

One more thing that you might find useful. I have found that managing small roasts are much easier than large ones. Sticking to 350g. for a while will give you a good idea about what normal fluctuations you might expect in RoR, etc. I still can’t manage 1 kg. roasts adequately. I think it’s because of the greater inertia in larger roasts. The increased bean mass means that the response lag is longer for any roast parameter change…

It seems also that having an AI system where you input your desired parameters for FC, drop temp and it calculates the ideal slope of ROR for you and making micro adjustments along the way to keep it declining might be the holy grail, but certainly not as fun as landing on it ourselves

Hi
My 5c… (months later)
this cannot work because by the time a computer “sees” that a micro adjustment needs to be made, it is REACTING to what should have been done previously, in other words, it will adjust too late every time. We have to get to know what to anticipate, and to make the adjustments before the spike, hump, crashes etc happen.
Mark.

by the time a computer “sees” that a micro adjustment needs to be made, it is REACTING to what should have been done previously

I’m inclined to agree. I seem to prove it every time I roast. I suspect this is a case of needing to use a lot of heat early in the roast then mostly let it coast with few downward adjustments. The risk is running out of heat before the target (stalling) which leads to chasing (“reacting”). Drum speed adjustments are helpful for quick RoR response, but again you’re probably chasing.

Hi! Just wanna put it out there that ROR is a purely mathematical concept and it is only worth comparing ROR numbers when your turning point, instantaneous BT, and 2nd derivative of BT (or slope of ROR) are more or less identical between roasts.

I decide how quickly to drop my power and up my fan settings based on the trajectory of the roast 1min after peak ROR (or inflection point - the point where probe temp becomes a reliable proxy of actual bean temp). But you have to take note of where the turning point is - a higher than usual ROR might be just because of a lower turning point due to insufficient preheating. 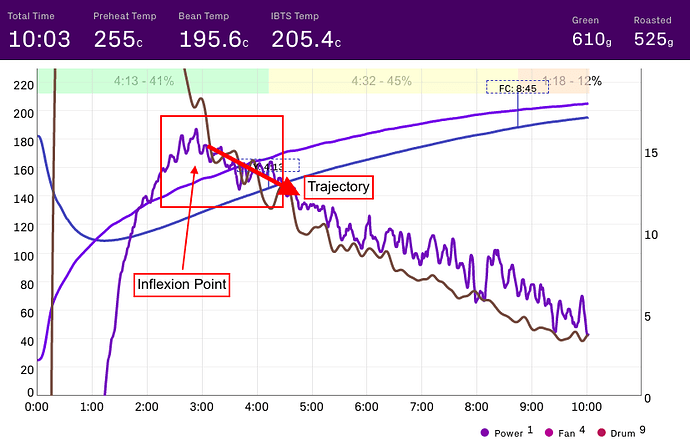 I actually disagree with using drum speed to adjust BT ROR, because the drum speed affects the contact area and time of the beans to probe → what you’re reading is not necessarily a change in the temp of the actual bean itself but just greater/lesser transfer of heat to the probe. (if you’re basing your ROR off the IBTS then it’ll provide a more accurate picture.)

Perfect Daily grind has a good article about drum speed. Just recieved my roaster and waiting on green. Cant wait to get started, once I have had a few roasts will be able to comment more about how the roaster and beans interact.