I’ve had the Bullet for about a year and a half, with no issues until a few weeks ago. During preheating, I get a single “beep”. Preheating does NOT stop, and the beep lasts about one second, longer than the rapid “Dean Man’s Switch” A-02 sound.

No error gets displayed, no flashing panel. Sometimes it happens 2 or 3 times, always during preheat (so far). It seems others have had an issue like this, but here the preheat is NOT stopped. Just an annoying BEEP that doesn’t seem to tell me anything.

Does anyone have any explanation for this? And should I be concerned?

I have had this issue for about a year: audible beep ~ 1 sec during preheat with no ErC. IIRC it started when there were changes being developed for the new (V2) power board. I’ve also had the event occur during a roast (rarely) and in that case the power → P0 and I have to act quickly to save the roast but response time to the power change seems to be slow. During preheat, however, it seems to self-correct. There are apparently codes being thrown which are sent to the server, so support should find some clues.

In my case there was a thought that it may be a non-USB comm issue (i.e. internal to the Bullet). I upgraded my power board and Aillio supplied a new control board. There was a small decrease in frequency of the even, but it still happens.

Do you by chance do a long preheat before your first roast? (My first preheat can run out to nearly an hour, sometimes more.)

Thanks for this, Bruce! My preheats usually go 30-40 minutes. But I have never had an event happen after the first 5 minutes or so. It appears that the higher drum temperature ameliorates the problem.

As long as this happens only in preheat, I would be hesitant to install new hardware components. But if the power —> P0 during the roast, I’d be pretty bummed…

I’ll start paying attention to the preheat parameters when the beep occurs. It will be interesting to see the preheat power levels and ROR data.

It doesn’t predict what will happen on your case but with my roaster, changing the boards didn’t eliminate the problem. You’re right that as long as it stays in preheat you can deal with it.

My habit is to get my head turned as fast as I can to see what the display says (haven’t made it yet but I get closer each time!

). By the time I react and get my head around, the display is just blinking back to normal, but I do think it had something else displayed briefly before I was able to see.

Ditto as @bab. I get the occasional beep during PH and, except for one instance when the P dropped to 0, the preheat went on as usual. However, when the same beep occurs during roast, the P often drops to 0 and the roast needs to be salvaged by quickly raising the P to the previous level. I feel it could be connected to airflow. More often than not, I’ve had this issue while roasting naturals with a lot of chaff. As suggested by @bab, vacuuming the chaff collector/air filter in between b2b roasts does help to a certain extent.

Update on my recent roast… Just now, I did a roast in which the beep continued throughout the roast. After about 5 minutes into pre-heat, I noticed that it seemed very regular. Indeed, over the next ten minutes, I recorded the times of beeping, and they all had a delta_t= 41-43 seconds between beeps. Then, at about 25 minutes, I detected a small (but noticeable) change to delta_t= 36-38 sec.

The beeping continued throughout the roast, even into the cool down mode. In shutdown mode, they stopped. I took a screen shot (shown here) of the parameters during the pre-heat phase. Fortunately, the recipe seemed to be obeyed exactly. No power drops to P0. Just that annoying beep!

No logs seem to be generated for me. Does that have to be turned on somewhere? 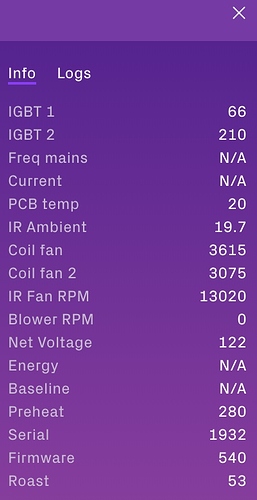 … No logs seem to be generated for me. Does that have to have to be turned on somewhere?

No, nothing to be turned on. If you contact Aillio support (trouble ticket) they may be able to find something on the server. It was my impression that this particular issue doesn’t generate anything for the local Log (since there’s no ErC) but that something ends up on the server.

It doesn’t register on the Aillio server side either. I sent a link to them a week back to a roast with a P0 error. No logs at their end as well.

Has anyone generated any local logs, ever? Is this just a placeholder for some future update?

Prior to RT3, when you clicked on the Log tab, there used to be some string of codes displayed that you could copy. As of RT3, the log tab is supposed to be populated as and when errors occur. However, the P0 error does not seem to raise any error entries there.

Has anyone generated any local logs, ever? Is this just a placeholder for some future update?

@cash0612, @matilsky - Occasionally I see something even though I wasn’t aware of anything being a problem when I saw it. I just passed it off as a status report, but… ?? I guess it fits with what @cash0612 is describing.