Best Practices for Speeding up time to First Crack

I’ve been roasting for about a year on the FreshRoast SR800 and have started with the Bullet about a week ago. I’ve been researching people’s roasts and this form for a bit, trying to understand the best practices and ways to optimize my flavors.

My first few successful roasts are coming out incredibly smooth and sweet but lacking in acidity. A milk chocolate sensation in almost all of them. This works well for some coffees but some of my other coffees would benefit from a touch more acidity for a juicy sensation.

This coffee I’ve roasted twice on the FreshRoast SR800 prior to trying it on the Bullet. Here’s the roast I’m specifically referencing: 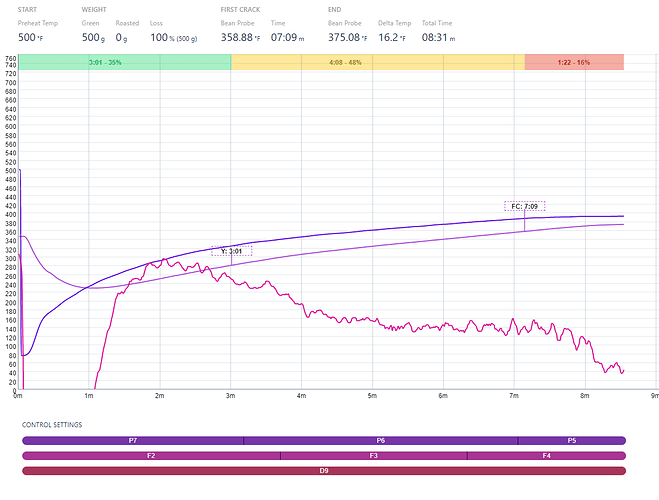 This coffee came out very sweet and chocolaty, but the acidity was way turned down when compared to my SR800 roasts (which are fairly quick roasts, 6~7 minutes). The SR800 roasts have an intense fruity acidity, that’s almost sharp, while that Bullet roast was almost like a whisper of a fruit. Like having someone is whisper “cherry lime” into your ear whenever you take a sip. Not much lingering fruit flavor in this one.

Anyways, my research and experience to get more acidity seems to have led me to believe that perhaps I’m spending too much time in the yellowing phase, which seems to have a tendency to be around four minutes in all my roasts. Seems like three minutes is the magic number for light roasts?

I have made a couple of attempts to quicken the time between yellowing and FCs but I’m starting to get a little confused on what the best practices are for doing so. Here are two attempts I had trying to bring that time closer to 3 minutes (I have not tried these coffees yet, will be trying in the next few days): 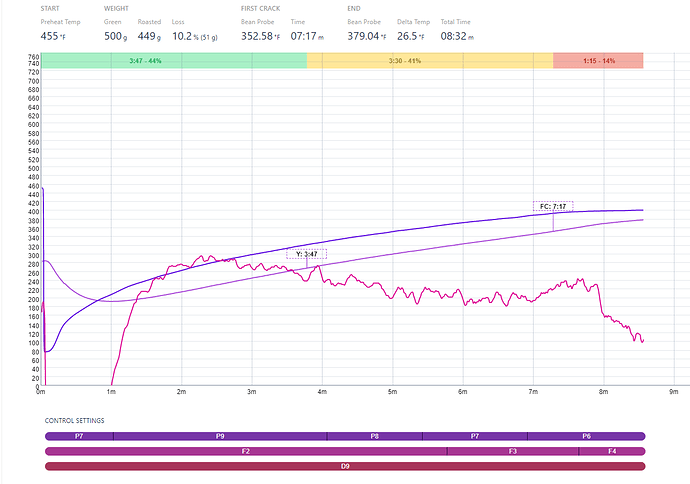 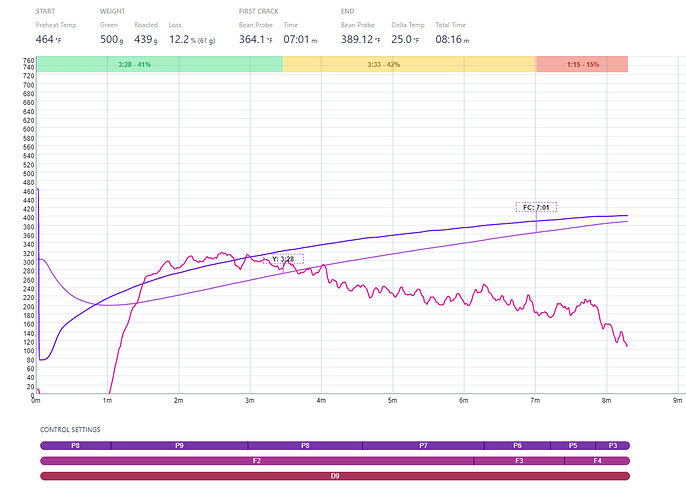 I’ve been marking the yellowing phase based on appearances at 320F IBTS, which is the RoastTime guideline recommendation. It seems about accurate but it seems pretty debatable and I could easily imagine others marking it a few seconds earlier or even later.

I’m also not entirely sure that the four minutes in the yellowing phase is even the problem, perhaps I should just be letting it out 30 seconds earlier despite how quick that is after first crack. Oh! I also mark first crack around the ‘third’ first crack, as there’s always an outlier or two.

My first idea to reduce the time was to hit it with a ton of power in the beginning, but it didn’t seem to make a major difference. Just about 30 seconds or so. I did experiment with preheat temps a bit in a few other roasts and that certainly seemed to reduce the time to first crack but it also seemed to increase the temperature when the beans finally appeared yellow. Increasing the preheat temp is making me afraid of under developing the inside of the bean or even burning some naturals/honey processed coffees I have.

So, I’m curious what the best practices you have developed for shortening the time to first crack after drying? Do you think that’s really even the problem or perhaps I’m encountering some other issue you experienced? Ultimately I’d like to just slightly enhance the acidity, thanks!