This is my first post, so please be gentle with me. lol

I had a Hottop with probably close to 700 roasts on it with Artisan.

I have had the Bullet now for about 2 weeks and have 27 roasts fo far. I started out with smaller batches to experiment with the settings and controls.

I just ran 2 batches at 2 lbs each. (906g) and noticed that the IBTS stopped rising and the BT curve kept rising and passed the IBTS. If I had waited for the IBTS to get to my target temperature, I would have started a fire.

I am assuming that the IBTS gets covered by the beans as they expand and then the IBTS no longer can read accuratly. I ended up dropping when the BT reached 405.
(One of my pet peeves with the Hottop was that the probe temps lagged by about 20 degrees. Once you accept that, you can adjust your profile mentally. You just can’t talk to pros with larger machines and tell them that you are dropping at 380.) 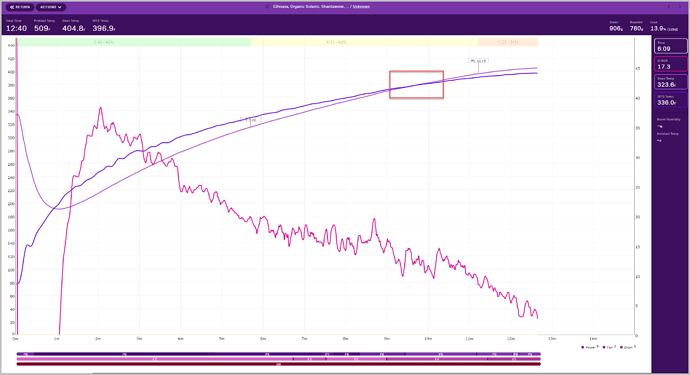 Here is a link to the Roast World Profile:
https://roast.world/@bill.milagrokfoc/roasts/aoziMJU3bbH4E3MIhpAqd

Comments on the profile are most welcome.

Using the Bullet, and assuming you have an IBTS cooling fan that is working properly (use the “info” button on the Roast page)…

IBTS & BT shouldn’t cross. The ir sensor of your IBTS has roasting residue on it, i.e. it’s dirty. Looking at the sensor lens (the flat glass covering) using fibre optics most often tells you nothing. Just follow the instructions mentioned here on R.W and in the Bullet manual for cleaning IBTS.

It will take several passes with the cotton swab + alcohol and you probably won’t see anything on the swab. Be sure to start by cleaning the walls of the rubber view port so that ugly stuff doesn’t end up on the sensor lens when you finish.

Besides the issue that the roast will be taken to a higher-than-wanted temp at the end, one of the issues with the IBTS sensor being dirty is the IBTS is used to determine Preheat temp. If the sensor is dirty, some of the ir radiation is being blocked from reaching the sensor creating an error in that reading- the sensor reads low. The effect is that the drum is being heated to a higher temp than the sensor and ultimately the f/w think it is. In this case I’ll make a wild guess at 30C°.

The beans are not blocking the ir from reaching the ir sensor. The beans are the source of the ir. More beans, more ir sources. If anything a larger batch size will improve ir accuracy provided the ir can reach the sensor.

Edit- small-batch profiles don’t directly translate to large-batch profiles by simply raising the power. Additionally the ratio of BT:IBTS readings change because of the bean mass. From what little I’ve seen I believe the 2 readings come closer together as batch size increases. I can’t offer guidance… like the one-trick-pony I keep doing the same thing using just 550g batches. But there are folks here that do both small-batch and large-batch roasts . Hopefully one of them will step in here.

Hi Bruce,
Thanks for the response.

I’ve been reading much on the forum and appreciate all of the helpful comments from you and others.

I have already cleaned the IR sensor. (as an aside: I used to repair industrial robots for a living. I know my way around mechanical, electrical and electronic systems)

If you go to the Roast Discover tab and filter the results to a minumum Green weight of 900, You will find that 99% of the profiles have the BT and IBTS curves crossing.

For my smaller weight roasts, everything is as expected. When I use the overlay or playback feature, my curves match the sample profile that I select and the drop temp is just like the template that I am using. That kind of rules out the IBTS being dirty.

Different subject:
One of the other things that I noticed with the large batch is that a lot more smoke was created. I don’t believe that this is related to the BT/IBTS curves. I am going to try to conrtrol the heat by adding more fan earlier on rather than turning down the power. Hopefully that will help push much of the chaff out of the roasting chamber. I am thinking that maybe there is so much chaff in the drum that it is smoldering.

I keep everything very clean. I take out the chaff basket and wash it in the sink with dish detergent and keep it sparkly and un-clogged after each roasting session. I vaccum out the chaff chamber after every roast using the trap door and temporarily removing the bean filler plug. I get about 80% of the chaff out that way. Without removing the plug, I only get around 40-50%.

Check out these two roasts of mine:

I’ve definitely found that even though the sensor looks clear and shiny, a few aggressive swabs with alcohol+cotton makes a big difference. I need to do this about every 15 roasts, I think.

That is very interesting. I looked at your roasts.There was a big difference.

I cleaned the IBTS very carefully and ran the roast that I ran last night. It came out about the same. It still crossed, but it did it a little bit later. (about half a minute, later)

Thanks for the suggestion.

I agree with what Bruce and Damon that the BT and IBTS curve crossing can be a way to identify that IR sensor maybe need to be cleaned. But it is also truth if the batch size of the green bean are larger the gap between of BT and IBTS becomes smaller. I have noticed it somewhat related to the charge temp that I am using. The higher charge temp the larger that gap. It is also related to the induction power that applied to. Higher power can maintain the IBTS higher than the BT.

However, I have also experienced that same as bill.milagrokfoc mentioned here. Because the way I apply power is much less than what Damon demonstrated and because of my personal roasting preference I will always encounter this symptom that the BT and IBTS will be crossing each other if the batch size is larger than 800g.

I will use most of the time a smaller batch size to roast (less than 600g) to avoid that crossing.

Thanks for the suggestion.

Maybe like @fred0823 says, I’m avoiding some weird curves by roasting 800 or less.

This is an interesting conundrum.
I am going to dig out my old thermocouple thermometer and modify the probe length so that I can get it into the bean mass through the bean charging plug. Then I should be able to map out the differences between the BT and the IBTS and see what the temperatures actually are in the bean mass.

I had to do the same thing to my Hottop. Once I knew that 382F was actually 400F on my Hottop, I stopped worrying about it and adjusted my profiles.

As I am writing this, I am thinking that I might be able to set up a second computer with Artisan and compare the Bean Temp with a more sensitive thermocouple and the resulting ROR and see if it matches RoasTime. Oh Boy! a new rabbit hole to fall into. lol

Sometimes I look at some of the pictures of people local to the coffee farms roasting coffee on a steel skillet over a wood fire. I don’t think that they are concerned with Rao’s ROR.

Sometimes I look at some of the pictures of people local to the coffee farms roasting coffee on a steel skillet over a wood fire. I don’t think that they are concerned with Rao’s ROR.

I would suggest you try to raise that charge temp up to around 290C or above for a 2lb (900g) of roasting. See if starts to create a gap in between. Or at least it cross over after the FC. (make sure the IR sensor is cleaned)