As soon as it reached 230, it started dropping. I waited to see if it would stabilize, but it kept decreasing. I shut off the roaster and started again. Now it won’t heat at all.

Update: This issue is sporadic. If it happens, restarted the roaster a few times gets it to work again. It seems like sometimes reducing the power to 0 makes it so the heater won’t turn on again until a reboot. 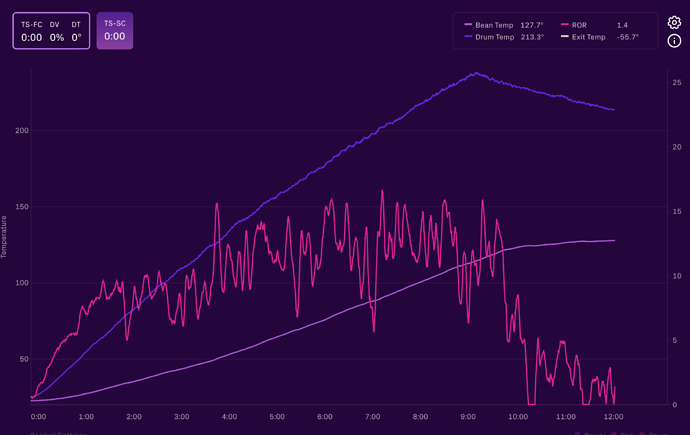 After restarted a bunch of times, I’m able to get it to heat again. Will see what happens next.

Still having the same issue.

No issues yet on firmware 512

@jacob is there a changelog for the firware ? I wasn’t having any issues with 507 as such but wonder what benefits 512 addressed ?

Jacob was helping me with this issue and told me that they adjusted parameters for the induction board in this firmware to try to correct this. Not sure if it has any other changes.

All of a sudden I am getting an error message 6384 and the Bullet won’t preheat. The manual says to check the induction fan. The induction fan spins freely and even starts to spin when the roaster starts to preheat, then everything shuts down. Power drops to zero an the fan stops spinning. I was running FW 475 with no issues when this started. I upgraded to 508 with no success and then to 512 again with no success. No idea why after 30 roasts this started to happen.

in 99% of the time its a loose connector somewhere.
I would check the connectors on the Induction Electronics under the roaster, though it could also be on the main PCB, or the small PCB near the motor - opposite side of the chaff collector.

Let me know how it goes.

Thanks. I’ll check those later on today.

Jonas, Matt gave me some instructions to check the connector on the small pcb for the little induction fan. It all looked fine but I unplugged it anyway and pushed on all the wires then plugged it back in. I didn’t see any loose connections on the plug or the pcb. I restarted the Bullet and I was able to preheat and run a roast so maybe something was slightly loose and I just couldn’t see it. I’m planning on running multiple roasts tomorrow so hopefully all goes well.

Good to hear.
If it comes back, you can check what I suggested.
Sometimes it looks like the connector is pushed in properly, but in fact the small crimps are not fully connected.

I did check all the connectors on the main and small pcb. hopefully it doesn’t come back.

I’ll be checking this one before my next roast too. Strangely enough compared to the other reports of this issue, I preheat just fine and get an intermittent 5 or 10 seconds of the 6384 error right after I charge. It’s happened my last two sessions. Last night, I was just about to dump/abort, pull the roaster apart and check everything but found that it recovered, allowed me to set power, and proceeded normally from there. I also went back-to-back last night and didn’t have the issue on the second roast.

For anyone keeping track at home, I’m running firmware 507. I had at least one, and maybe two, error-free sessions after that upgrade and before this started. I’ll let everyone know how a check and re-seat of the connectors seems to do for me.

Curious on how that check and reset on the error code 6384 went for you @bsb. I’ve started having exactly the same problem. Preheats just fine, I dros the charge in, runs about 10 seconds…then it panics. Did you ever get a good solution here?

Are you still having this problem or did a firmware update fix it?

What firmware are you using?

I upgraded this evening (after the problem happened again) to 523. It’s been following me for a few firmware updates though. So I wouldn’t say it was specific to 515.

Did updating solve the problem?

I haven’t gotten to test it out yet!

I have coffee now. Will soon. You can close the ticket and reopen if you want. Is there something I can check in the meantime? Maybe reseat the cables underneath?

Unfortunately, I haven’t come up with any sort of pattern that I can find that would explain why it might be happening. I’ve just kind of satisfied myself with running recipes with a soak, not fighting it when it happens, and accepting that sometimes I soak at P3, sometimes it’s P0 and sometimes it’s P3 for a few seconds then P0. I end my soak and increase my power at 45 seconds, and have never had the issue after that.

All my data’s online. If you’d like to take a look and see if you notice anything, I can give you links to ones where the error occurs.