Chaff coming out the front end

Is it a design flaw or?

I have chaff flying into the cooling bowl from just under the front door; how can this be resolved?

Not a flaw… it’s part of the design to have chaff fall out the front of the roaster (below the door).

Very odd and inconvenient if I may say; perhaps I’ll try elevating the front slightly next time to see if it helps force the chaff to the rear collector!

Check that air is coming out of the exhaust and your squirrel cage fan is turning (you can see it through the exhaust port). Could be that it’s hung up if the filter isn’t fully seated in the rubber gasket, or spinning on it’s shaft if the set screw is loose. Also make sure the rubber plugs at the lower rear of the chaff collector and at the bean chute are in place. Basic stuff that I’ve overlooked before

I usually get between a few spoonfuls to a small handful of chaff in the bean collector filter screen after each roast, depending on the bean.

I have the same thing happening but find it varies greatly depending on the variety of beans I’m roasting. I just hit it quickly with my vacuum before bean drop and all is good.

“Gotta wipe the baby’s lip.” Part of roasting beans with a lot of chaff.

Probably counterproductive to tilt the drum assembly. The geometry of the drum assembly can get defeated making it difficult to drop the beans, and you want the beans to move toward the front plate which is where the Bean probe is located and where the IR sensor is aimed. Also, the cooling tray fan is always spinning at low speed during the roast which should keep the chaff from flying out of the tray.

If you are left with more chaff than you want after the beans cool, try winnowing the beans (outdoors!!)- the chaff usually separates readily. This is my routine before bagging. And yes, I then have chaff to clean up outdoors, but I deal with it and the shop stays chaff-free. Works for me but YMMV.

The Bullet should be level to function properly. Tilting it may cause chaff to accumulated under the drum and this could start a fire or make the drum get stuck.

Big commercial roasters have a dedicated tray to collect the chaffs that fall out between the front and drum. However there is no space for such a tray on the Bullet, instead the chaffs are designed to fall out into the cooling tray.

I used to have the Cormorant roaster and had no such issues with chaff coming out between the body and front door, so this issue is unique to the Bullet R1! 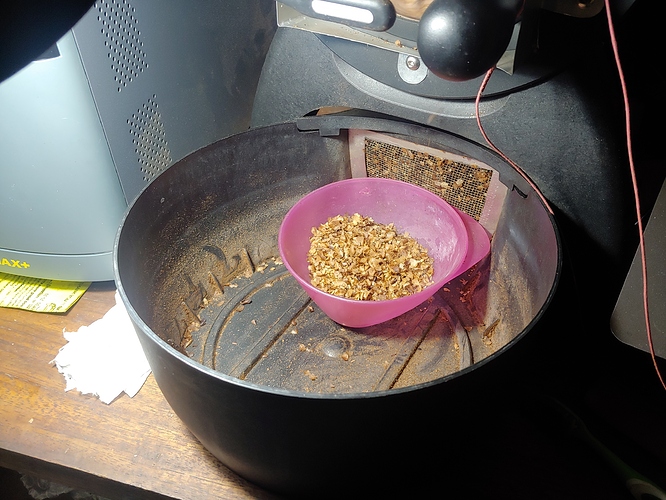 Thanks for the tip @cash0612. Today I had green beans spewing out at the start of the roast!

There’s probably more than one reason for this but it may be an indication the number/thickness of shims on the front of the drum shaft is setting the drum too far back. If you contact tech support and start a trouble ticket they’ll guide you thru trouble shooting to get the setting right without having the drum rub against the front plate. The Aillio site also has a Support tab that includes videos and help instructions but I didn’t see anything that sounded related.

Thanks for your advice, @bab! Will have to unscrew the front and have a look! I was using peaberry beans which were just spewing out in handfuls from the ‘gap’! [quote=“bab, post:12, topic:3743”]
shims
[/quote]

I had a similar experience last year. I was left with a bean somewhere inside the roaster that refused to drop out and set up a ghostly groan that sounded like a cheap horror flick. When I got the tools to disassemble everything the sound disappeared. I chose the “let sleeping dogs lie” approach so I still have no idea where the decaying remains are hiding!

Was there a grinding sound associated with the bean-leak? If there was (and you would need to know ahead of time what to look for) you might have seen the front plate bulge synchronously as the drum rotated and the beans leaked out. I was seeing a displacement of as much as 0.10". I assumed the issue was at the front of the drum but when I removed it there was no sign of any broken bean parts. I speculated that bean/beans must have been at the rear of the drum. But those vent holes are really small and I roast at just 55% of roaster capacity.

It’s a sheet of thin aluminium cut to shape and folded to encase the wire mesh in the middle. The default that came wore out over time and use. Got a replacement locally and cut it to shape but it could not withstand the heat. This one is working good so far. 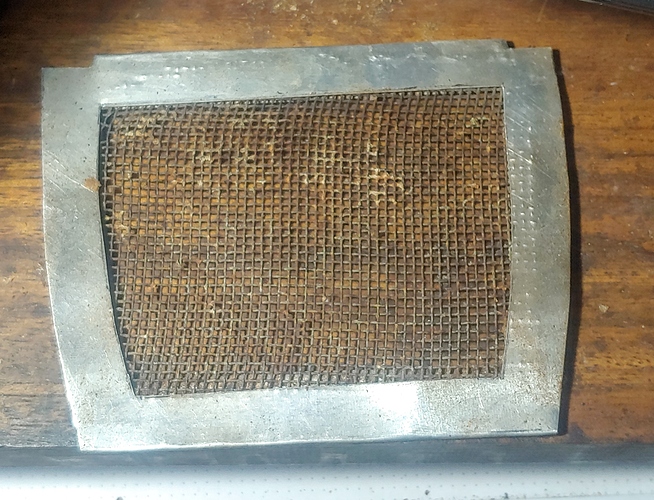 thank you for this ingenious solution! The original product does indeed warp with the heat and I have some concerns about the toxicity of the withering material.

The same thing has happened since I got mine. It is a minor inconvenience since the chaff falls into the cooling bin to be blown out later.
Emptying the chaff collector every roast helps.

I now use a small bowl to collect the front chaff until it peters off!

That is a lot of chaff coming out the front of the roaster, I have far far less for one batch.
My Bullet did not come with a screen, I made one similar to yours from steel window screen, works great.