I’m new to the Bullet. Prior to this, I roasted for 10+ years using an RK Drum on a gas grill. Relative to the Bullet, that approach was pretty limiting but I could always hear first crack. Between D9, my vent fan and the build of the Bullet, I have difficulty hearing the very beginning of 1C. I’ve seen some of the workarounds people are using. A few months ago, I saw a Tim Wendelboe video where he discussed the ambiguity of “yellowing” and the difficulty of hearing first crack on his roaster (a Loring, I think). His solution was to always mark yellowing at something like 165C and always mark 1C at 200C. If you manage your profiles to those two data points, is there any real downside?

Do some searches here on R.W. There are a few discussions about the problem of hearing 1Cs. I tilt the bean chute cover for brief intervals but take care to not burn your ear!

Using a fixed temperature is do-able but can vary with the beans/processing/moisture content. And you’ll need a very repeatable way to approach 1Cs- probably using a Recipe. Maybe make the effort to hear 1Cs with each new lot, then use that info for subsequent roasts… ?? Dunno. Not convinced but I understand the issue/frustration. The problem is if you go to an alternate you will have stopped trying. There may be a solution out there that works for you. I encourage you to keep trying for awhile.

Btw, hearing loss is a common problem and does get in the way of hearing 1Cs & 2Cs. About 5 years ago I had my hearing tested at COSTCO ($0) and learned I had enough loss to warrant hearing aids. My wife was sick of repeating herself so she was a happy camper! And COSTCO’s price for hearing aids was affordable. Turned out to be a good move as the hearing aids restored ‘normal’ hearing and now I can pick out the crack fairly well. After the 4th year COSTCO re-programmed the hearing aids to adjust for additional losses in my hearing ($0 for 5 yrs after purchase).

For Yellow point, I think judging color is way too subjective so I choose to record YP at IBTS = 330°F. No second guessing. Again, be consistent.

Thanks Bruce. I have hearing aids. The best solution I’ve found so far involves shutting off the aid microphones and using the microphone on my phone as a remote connected to the aids. This lets me position the phone by the open tryer or bean chute and also reduces background noise from the fan and whatnot. There’s also an equalizer function in the software that connects my phone to my aids. Still, while I hear first crack, I’m having a problem picking up the beginning of first crack. I feel like I’m hearing something like first crack (a slightly erratic click) throughout most of the roast that I assume has something to do with the beans tumbling. I’m doing small batches (250 or 325g) at D9. Maybe a different drum speed will resolve it. I’ll keep trying.

On a related note, I saw the Roest sample roaster at the coffee expo last week. They have a first crack detection that seemed to work well. You could see small marks for each crack (probably not at the individual bean level) as a mark on the time axis of the roast curve graph. They were roasting inside the Expo with lots of background noise and it seemed to work perfectly. Very slick.

I also have hearing aids but even turned up still had problems hearing the cracks. I tried a mechanics stethoscope thru the plug and it worked to hear the cracks but it’s just too much of a pain. I’ve now gone to a silicone tube in the tryer hole with a cheap amazon speaker and mike and it works great. If you want to use the tryer it’s pretty easy to just pull out the tube . I got the idea from this forum. Most on here are using a wireless , bluetooth speaker but I got a cheap wired one and it works great
Barry 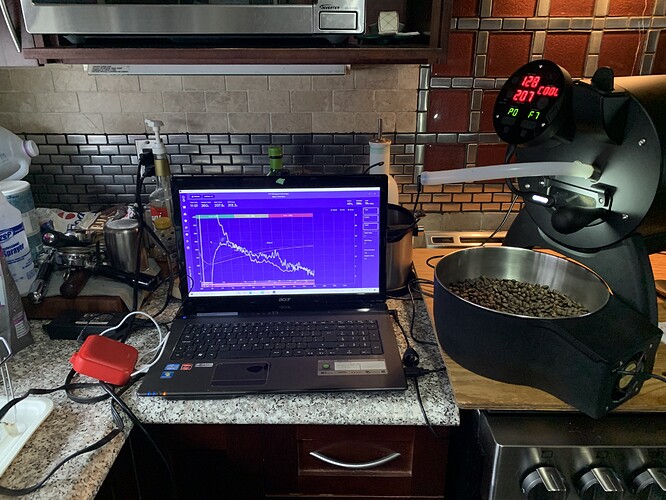 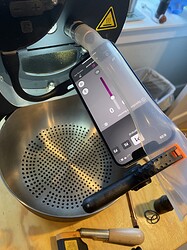 Unknown3024×4032 2.66 MB
Did the jpeg copy? It’s an image of my current listening tool. A copper tube in the tryer attached to a silicone tube attached to the microphone of my iPhone. The open app is my Oticon app that lets me play sound directly to my hearing aids. So far so good. I tried something like this before without the copper and it didn’t work as well. Thanks for your help.
util April 18, 2022, 2:32pm #6

Rob Hoos said in his class that he smells for first crack - at that point coffee releases a lot of acetic acid. I still prefer listening, but it’s an interesting approach. I also found that putting some distance between my ear and the drum sometimes is helpful - the crack sound resonates differently than that of the drum rotation.

Second util’s comment about smelling the roast. It will change from yeasty/bread to acidic. VOC, volatile organic compounds, are released @ FC. You will smell the difference just before hearing the cracks which can be very subtle.

You will also find that FC occurs around a certain temp in your roaster. For my roasts (several hundred tracked), FC average is 366F, ranging from 350’s to 390’s. This varies some by bean but there is a range where you can expect it. Once you hit that range, the change in smell will let you know FC is about to occur.

Thanks. I’ve been having more luck identifying first crack. Part of the problem may have been the result of some Ethiopian beans with a fairly dispersed start to first crack. I’ve just started working on the skill necessary to lock in on the smell of 1C. Carl

I cannot hear 1st crack well either. I am using a stethoscope to help me hear.

I’ve been roasting on the bullet for several years, and also have trouble sometimes hearing first crack – particularly on Yemeni beans. That said, I’ve found no matter what FC comes between 195-200C. So whether I hear it or not, at 200C I’m sure FC has happened.