I am troubleshooting the same thing.
Been have some strange problems lately, was advised to upgrade firmware to 540, did that…now have ERC 6864. Opened up the system, cleaned the IBTS noticed a lot of debris on the fan, cleaned it all up, put everything back together. Same thing. ERC 6864.

We are down hard. 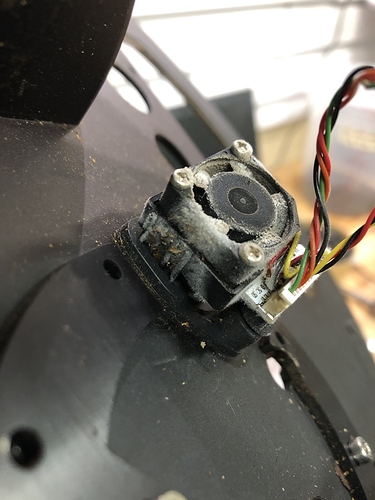 ErC 6864 was introduced into the f/w recently. It measures IBTS fan speed. Not sure the failure criteria but I think fan speed must be above 4,000 rpm. If it drops below you get the failure. From my experience it isn’t going away till you get a new fan.

The smoke particles are thought to be from the cooling tray. @johnrathwell had the same issue and I think @jacob has said they’ve seen IBTS fans returned with the same contamination. My failed fan was spotless but was still failing. ( Wonder if mine was clean cuz it wasn’t moving much air… ?? )

I wonder where all that debris come from.
Did you check If the fan does spin at all? You can check the RPM in RoasTime and you should be able to hear it spinning as well.
If it is completely dead then you could try soaking it in alcohol. Never tried this but worth a shot until you get a new one.

Now I’m dealing with this too! I just caught it as I was getting ready to fulfill a bunch of orders! Thanks for all these good notes. Sent in a note to support and am going to try and take this a part and clean it to see if that helps.

Here’s what my fan looks like. Think this could be the problem?! 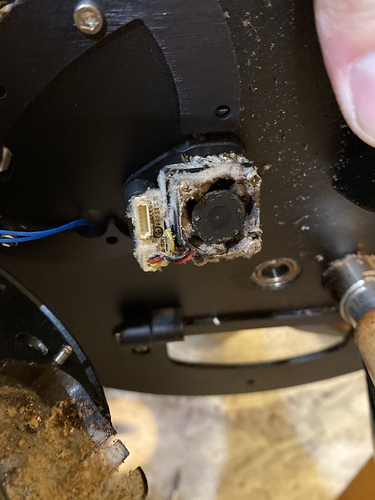 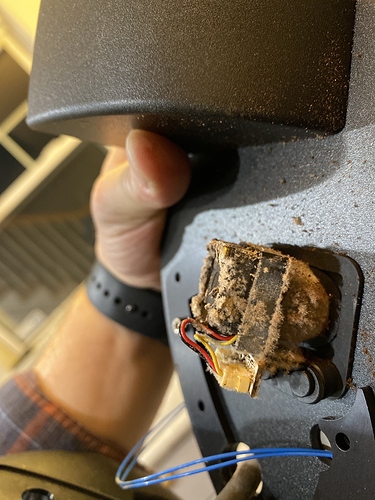 Update: took everything a part and cleaned the fan with rubbing alcohol and put it all back together with no change at all. It is still showing the error. Any thoughts on next steps? fw is up to date as well.

Wow! That stuff looks like tiny filaments that have grown from the fan & connectors & whatever else it can attach to. Yikes! There can’t have been much air velocity or the filaments wouldn’t have been able to grow to this length (they would have broken from the air currents). It’s like there was very little air motion. Yet there’s a fan spinning at over 15,000 rpm. Wish I had a clue what this is.

Edit- Just wondering out loud- I suspect I’m right that there was nearly no air flow thru the fan. That would allow filaments to grow undisturbed by air flow. When you get a replacement fan it would be interesting to confirm that the passageway beyond the fan going into the drum area is actually clear and not blocked.

Thank. I haven’t confirmed a replace fan yet, but hoping that happens soon. Will update once I have this worked out.

I really wonder how your IR fan can be that dirty. How do you went out the smoke?

I have an external exhaust fan I use that pulls the smoke out. My only thought is that I roast a decent amount each week, around 20 pounds?

You probably have it covered, but I have to ask: have you provided a supply of outside air to make up for the air the external exhaust fan pushes out? It’s easily overlooked, especially this time of year!

Sorry - it’s not connected, it is the oven hood. When I roast the bullet sits on my stove and I have the exhaust fan on above it.

My last two roasts I’ve had the 6864 error as well. On the last but one, I downgraded then upgraded the firmware (running 540) and had no problems.

I have not opened the machine to look at the fan. (I replaced the IBTS assembly when I first got the machine as it was not getting power)

I religiously check fan speed (see parenthetical comment above) and indeed the fan speed starts below 4,000 - but then ramps up to between 11,000 and 15,000 - it is quite variable.

I’ll keep roasting, and try to collect more data on the next roast.

The countdown timer is related to the failing fan. As I recall, they added a timer for pre-roast conditions to allow the fan time to ramp up. Once the roast starts the timer isn’t used.

ps- the fan change is really quick since you don’t have to remove the whole IBTS as you did before. Just disassemble the control panel, board & pedestal to get to the fan, remove the 3 screws and swap the fan, then reverse your steps getting out. I was in & out in about 20 minutes and I’m pretty slow. The front plate stays on the roaster.

Do these fans fail? I did not have this problem when it was new. (I have a V 1.5 where, as I mentioned, I had to replace a failed IBTS assembly)

It certainly does spin fast…

My Bullet was delivered as V1.5. My IBTS fan worked the same way yours does from the day I received the Bullet in January. When they introduced ErC 6864 through fan speed measurement in FW 540 (537?) the failure was immediately identified- my problem was there all along. I had assumed the slow IBTS fan speed was the result of built-in speed control based on temp (perhaps IBTS Ambient). Wasn’t till ErC 6864 came along I learned the fan is supposed to be at max speed as long as power is applied.

My sense of fan operation on my Bullet was that startup speed was 4,000 - 5,000 rpm till I started roasting when it would move up to 10,000 or more rpm and would settle out at about 15,000 - 16,000 rpm. Colder weather made it run slower. Since I roast outdoors, ambient affected fan operation… except it isn’t supposed to do that.

I’ll get in touch with Sweet Marias.

I’ve not yet contacted SM regarding the fan, as I’ve come up with a solution that seems to work.

When I first plug in the machine, I start the pre-heat immediately. (running 540 by the way). I get the 6864 error code after about 5 seconds. I cycle through the controls (load.roast.cool.off) and let the machine sit for about 30 seconds. Then I start the pre-heat again. At this point, the fan starts spinning at about 6,000 RPM, ramping up t o about 13,000 rpm shortly. The pre-heat and roast proceeds normally.

I just worry that the fan is showing signs of distress. I would hate to be without the roaster (as I gave away my old Hottop and don’t have a back-up) if the fan fails completely.

Does anyone have an idea about a progression to failure?

They added a 20 sec delay to the test for fan speed at start-up, but that delay goes away during a roast. As long as you can get above (and stay above!) the minimum in that time (>5,000 rpm?) the fan will probably warm enough to get the speed to stay above that minimum. Mine was worse than yours initially so it didn’t have as far to go to fail. The delay he added didn’t make any difference in my case. The failure of my fan was of steady decay (vs. a sudden failure). But I’d get that replacement on the way before too long. We’re all spoiled and can’t go long with bad coffee!

Which firmware added the 20 second delay? I just got the error again today on 540. It stopped after a bit and the fan is around 12,000.