Hey All - I’ve recently been running into some weird behavior of the IBTS RoR reading and I’m curious if anybody else has run into the issue or can shed some light. Essentially what I’m seeing is that on the first of two back-to-back roasts, the IBTS reading appears very erratic in the early phases of the roast - big IBTS RoR oscillations and smaller IBTS temp oscillations - before calming down in the second half of the roast. On the second of the two back-to-back roasts however, the IBTS appears super stable from get go.

Current thesis is that I am not pre-heating the roaster long enough, but I usually give it a minimum of 20-30 minutes regardless of “charge” indicator.

For some additional context, I’ve only got about 20 roasts on this bullet, excluding the 3 seasoning roasts, and I’ve started seeing this behavior on the last 3 roasting sessions (6 roasts). Here are the screenshots of my two most recent roasts: 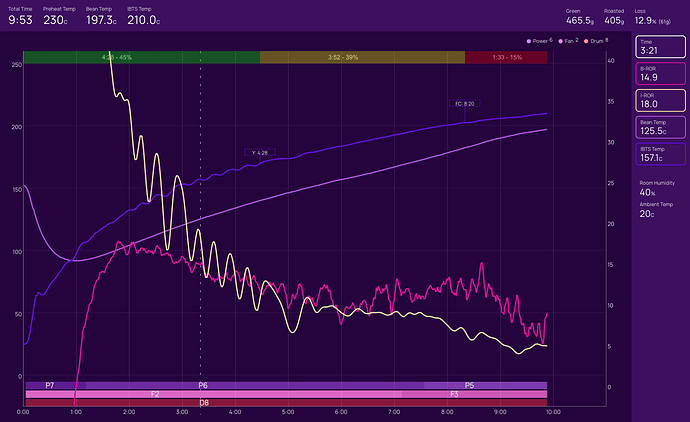 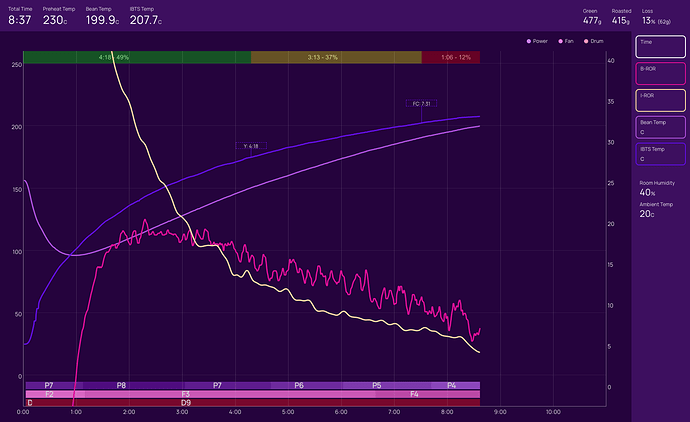 If you look closely at IBTS you will see movement similar to that seen in I-RoR. I-RoR is a plot of the change of slope of the IBTS curve so it’s correct that any change in IBTS is somehow reflected in I-RoR. Bottom line is that what you see is correct.

I’ve also noticed this on some roasts. I haven’t been able to pin point exactly the reason why, but my thesis is that certain bean weight and drum speed combo appear to give me this erratic behavior. I’ve had some even bigger swings than the roast you posted above. D9 seems to be the optimal speed to avoid this, not sure why though.
FWIW, I clean my IBTS regularly, so it’s not because of a lack of maintenance.

The issue stems from an artifact in the sampled data when measuring IR sensor output. It’s the combination of sample rate, drum speed and bean motion. Distracting but not a big deal. And it does diminish as the target area gets hotter toward the end of the roast.

I now have this problem as well, but have not seen it for my roasts for the first two plus years. Now occurring regularly 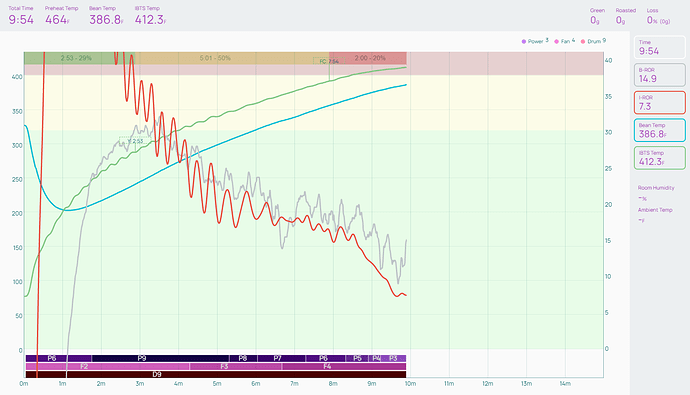 Anyone have any new theories or suggestions?

Happens even right after a deep clean?

Thanks for the prompt reply.
Don’t know yet - I did a deep clean about a month ago and all was operating normally before and after.
Will do one when I return in two weeks if I cannot get it done today.

Let us know. I know I get that wiggly IBTS line too but it seems to go away once I do a deep clean… until it is time to clean again.

Hi I have had this happen a couple times now, when doing multiple roasts. Seems to show up on 2nd and 3rd roasts. I’ve included some screen shots of three consecutive roasts, plus another done on an earlier date showing the graph from a similar roast for the Guatemala. You can see a similar roast profile but the IBTS line is erratic. The last time this occurred I cleaned the sensor inside the roaster (less than a month ago). But it happened again in some very recent roasts.

I’m not sure this is an issue that will completely go away. I just did a deep clean last weekend. If I roast this weekend I’ll post. I know my last roasts prior to the clean does have some wiggly IBTS RoR lines.