I recalibrated the fan, which solved the A-01 error. I then decided to look at the new V2 setpoints compared to my old V1 to find suitable replacements for my profiles.

What I noticed is that the fan RPM setpoints are always divisible by 10 RPM, compared to before, when the setpoints showed differences down to 1 RPM. Not a big deal or an issue.

Another thing I noticed was some weird incremental increases in setpoints for the calibrated setpoints… here is what I am seeing… as you can see, setpoint 5 increases by 300 RPM after an increase of 180…

Can we have a calibrated fan curve that is linear, or even better…parabolic?

The smaller incremental increases at lower settings of a parabolic curve would give better control, whereas the increments below…240-240-180-300-180 seems less than ideal for good control. Even a linear fan curve would be more predictable than the current calibration. 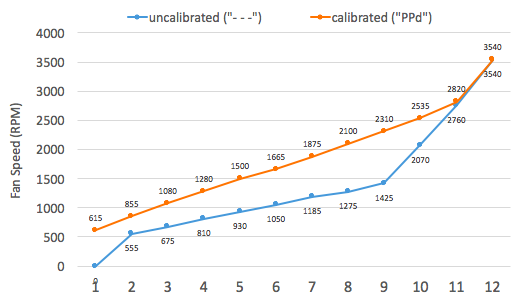 These are measured on a cold, empty machine after running calibration several times (due to user inexperience) with the chaff collector and filter removed. This clearly shows that the calibration feature was a very good idea, nice work guys!

It is trying to calibrate so that each step increases the RPM by 200 - with the chaff collector detached… So F1 = 600, F2 = 800… This will change somewhat when you attach the chaff collector and other factors can affect it. The plan is to make it unnecessary to even calibrate by using a PI controller, but this is still in the works.

Thanks Jacob. I’ll see what the calibrated values look like without the chaff collector attached

When I monitor blower fan speeds, why does it only change in increments of 60 RPM? Previously it did not, and the spread between low and high fan speed at each setting was only ~25 RPM. Now it’s always exactly 60 RPM, which implies that both precision and accuracy of the readings are worse.

That is weird. Do you have the exact RPM numbers at different settings?
Also is this the same when the Bullet is completely cooled down and during roasting?

I believe this is the case whether cool or heated, but I will verify.

During calibration, I see the same thing, where the values only change in increments of 60 RPM as the fan ramps up through the setpoints.

These are the readings I took yesterday afternoon while in roast mode with P0. Values in green are what I was reading. Even as the values change in the info panel, it only changes in increments of 60. 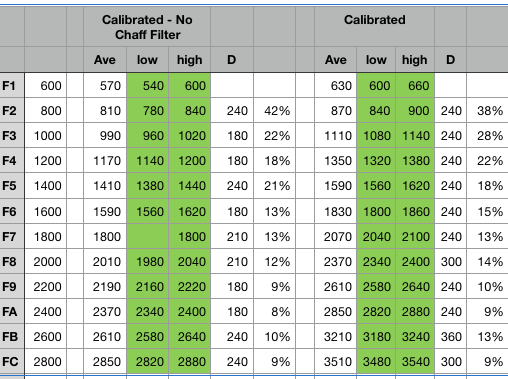 So internally we’re reading a sensor in revolutions per second, saving the data in integer format, and converting to RPM for display? Either way, sensitivity of 1 revolution per second seems adequate to me.

I’m glad your happy with it… but what your saying makes no sense. Why would you round or truncate an intermediary value…all you are doing is reducing precision and accuracy, and introducing error.

Ok, I understand what you mean now. I thought you were talking about the delta between each setting but you are talking about the resolution.
To be honest I don’t remember why it has the resolution of 60, but the new V2 boards are now responsible for calculating the RPM, this used to be done by the control board. This information is the sent to to the control board, then to RoasTime.
When I get more time I will look into this.

I don’t think its a RT thing…seems to me it must be firmware related. I can watch the fan speeds on the Bullet display while its calibrating, and the speeds indicated in the time display only change by 60 RPM.

RPM and CFM do not have a linear relationship. Example 25% of maximum RPM does not equal 25% of maximum flow, same for 30%, 35%, etc. If you google “fan curve”, you will see what i mean. If Aillio can get a fan curve for the bullet, its possible that we can determine what RPM equals the various airflows we would like for each fan setting (F1 - F9). There are several variables which make this a challenge, but at least each step (F3 to F4 for example) would provide a consistent airflow increase or decrease.

I realize that rpm<>cfm. But the Bullet currently does not provide any other form of data regarding fan performance.

In any case, this weekend I’ll be measuring linear air speed of the exhaust as a proxy for flow rate. Air speed will scale the same as flow rate since the only difference would be the cross-sectional area through which the air travels.

Based on this data, I’ll have a better sense of what the actual incremental changes in air flow will be for the setpoints. I suppose I would even be able to calculate the fan curve you mentioned.

At this point, the RPMs aren’t even accurate anyways, since the values change by 60 rpm.

I like where your head is! Do you have a pitot your using?

I don’t have a pitot tube…I’ll be using an anemometer I purchased on AMZN a while back when I was testing fans for exhaust and cooling.