To update your firmware to beta V428, please use RoasTime, click Settings -> Updates -> Check for beta FW. Then type the password: improvements in the box to the right of the Check for beta FW button.

If you have an older Bullet you will have to re-install the windows drivers after updating the firmware. After updating, start Roastime and check that the Bullet connects. If not, download the drivers USB DRIVERS and follow the guide carefully. There is no need to re-install RoasTime.

Should you experience any issues, please report them here or to Aillio support on facebook or email.

Is it possible to do this update using roast time for mac?

It can only update the release version for now, but it is something we are working on. 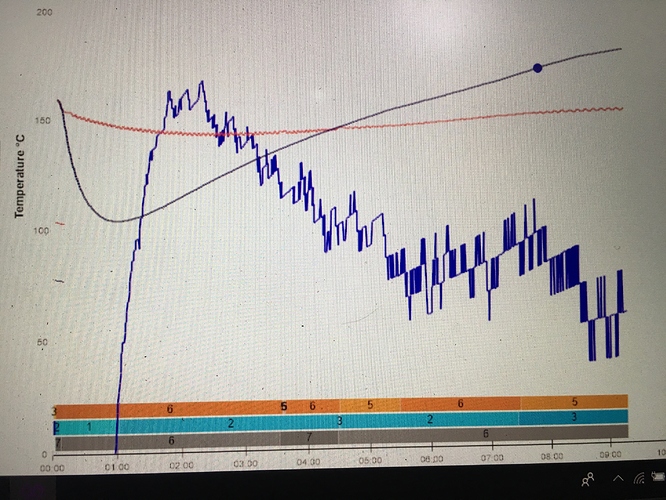 Is it possible to make adjustment to ROR sensitivity?

My unit now won’t playback a profile automatically. Roast time also doesn’t show it’s started a playback when started manually plus I loose the lower left hand temperature readings on the bullet window. Can I go back to the old one? How?

Looks like I have to reinstall window drivers…I just read that part.

Howard, I have the same issue with strange looking ROR profile after upgrading to Firmware 428…was this ever addressed? Thanks

We are working on smoothing it somehow. It’s an artifact from increasing the bean temperature accuracy at higher temperatures. All newer bullets ship with this firmware. If you want you can look at the averaged ROR but this is only after a roast in RoasTime.

Thanks for sharing this latest beta, Jacob!

Just curious, if the popping RoR curve is due to more accurate temperature, why doesn’t the BT curve have similar fluctuations?

The ROR is just the derivative of the BT, so the “noise” from the BT is directly affecting the ROR. The absolute values of the BT are more precise now because we use a lookup table instead of an approximation formula which gets less precise at higher values.
So with the new firmware the bean temp should be a bit higher than before.

I had some trouble downloading but finally got it working (slow PC with poor internet connection). The first roast in went great and followed a past profile very closely. 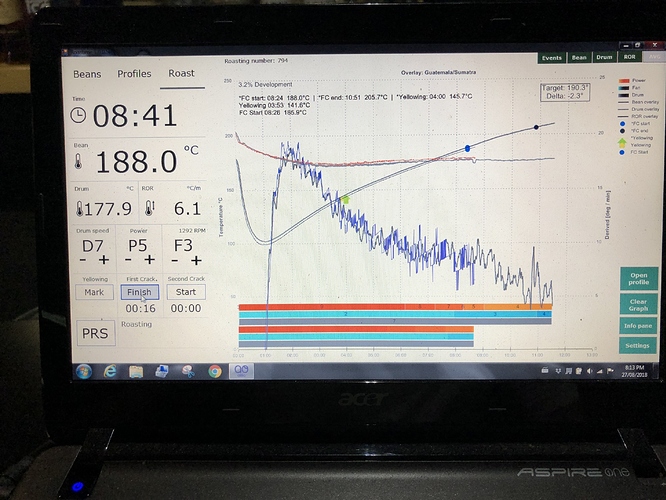 I have a similar situation to Howard’s. Since I updated to 428, the RoR starts jumping by ~2.5c, both up and down, starting when the BT is about 150c. Since I have become so used to watch the RoR during roasts, this confused me so much that I am embarrassed to post a screen shot of my last two roasts (large pre-FC swells).
After the roast, I pull up the profile, and even with RoR averaged to 1 sec, it is still the same. I tried closing and re-starting RoasTime, but still no joy.

When using playback, it seems that as soon as the software thinks R1 is ready, it says to "charge. But then it immediately starts the roast even though I have not charged beans… Is this the way playback normally works?

Subsequent to it starting the roast, I cycled through and started the playback over, charged the beans before it said “charge”, but then it does not detect the beans and I have to manually start the roast.

Hi Eric,
What version of RoasTime are you using?

I just updated to 434 and ran a roast. Much better! The RoR was back to normal. Thank you!