Please note that you can only use one version of the Roastime software at any given time. If you choose to switch from the current version to the legacy version, or vice versa, you will have to uninstall and reinstall the drivers.
Unfortunately we cannot make this any easier at this moment. We do however encourage users to stick with the most current version, as there are new releases every week. For any special feature requests, we would love to hear them.

Problem: After updating the firmware, the Bullet is no longer starts up:
Why is this happening: Something went wrong during the update process. We are investigating why this is happening to some users.
Solution: Please use this guide on how to solve this problem.

Problem: After updating to V448 I cannot connect to the legacy RoasTime (1.0.0.52) anymore
Why is this happening: Aillio now have our own USB international ID which only we can use. This new ID is implemented in the new firmware, thus needing a driver update.
Solution: Re-install the USB drivers. Go here to download the USB drivers again. Look on page 31 of the manual on how to re-install the drivers.

Problem: After using the new RoasTime 2.0.X I cannot connect to the legacy RoasTime (1.0.0.52) anymore.
Why is this happening: When you install RoasTime 2.0.X, new windows drivers are automatically installed for you and these override the old drivers.
Solution: Uninstall the new drivers and windows should roll back to the old ones by opening device manager then selecting Universal Serial Bus devices. Right click the Aillio LTD-Bullet and choose “Uninstall device” 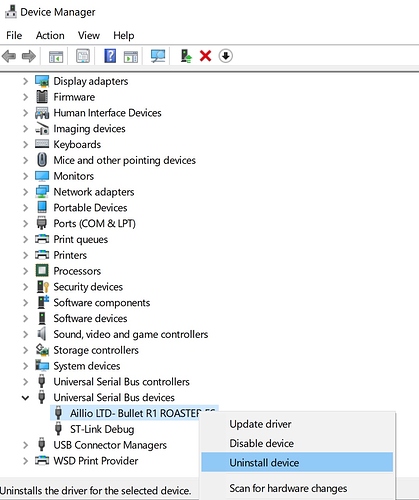 devicemanager1073×1280 193 KB
Then tick off “Delete the driver software for this device”, then click “Uninstall” 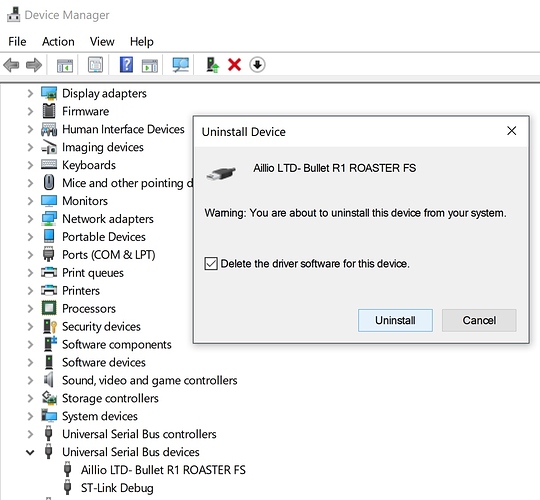 devicemanager21221×1129 194 KB
Now, unplug the bullet, plug it back in look in the device manage again. If the Aillio LTD still shows up under the “Universal Serial Bus devices” then repeat the above two steps once more.
Finally the Aillio should be found under the libUSB-win32 devices as shown below: 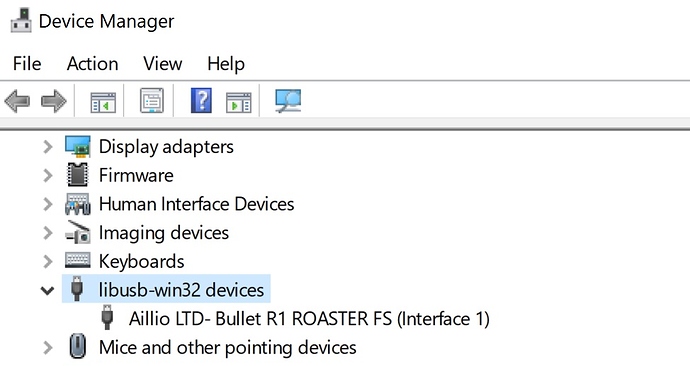 Problem: I imported my json files from the legacy RoasTime to the new RoasTime 2.0.X but not all profiles are shown correctly or some temperatures are not correct
Why is this happening: You may have incorrectly imported the json files found in the Aillio folder. Please export the roast profiles first, then import the folder containing the exported profiles.
Solution: Open the legacy RoasTime. Right click on the list of profiles and select “Export all profiles”. A new folder is created named Exported and these files should be dragged into the new RoasTime.

Problem: I imported my json files from the correct Exported folder but my data is incorrect
Why is this happening: Bugs and unforseen weird old profiles may not import correctly.
Solution: Try importing the json files again using RoasTime 2.0.6 This newest version should improve the importing part.

Hi there! I’m having the same driver problem after I updated the firmware to 606 beta version. After that, I could roast one batch and then I get the notifications on my screen about the USB was not recognizable and stop detecting my bullet. The device manager doesn’t show my bullet and tried to install the driver update through the roast time interface and after extracting the file the process stops when tries to install it (the install window just closes up).

Could you please share the latest stable driver version for x64?
I’m desperate I need to keep roasting!

If it does not show up somewhere in device manager then it is a hardware problem, most likely a cable issue. Please try with a new cable, new USB port.
There are no new versions of the driver.

Rather than ask my question with a new thread, I thought this might be an appropriate place.

Two years into my Bullet experience, I am roasting away with good success. I generally roast 1 pound (~454 gm) loads and occasionally go up to 500-550 gm and down to 340-350 gm. I don’t do many back to back roasts. My roasting is for me, my family and some friends.

I see all the issues when folks try to update firmware. My roaster came with version 556 andI have not attempted to upgrade. As I mentioned, I have had no issues with 556 so far roasting as described above.

Is there ANY reason for me to upgrade to latest firmware versions? Thanks!

Is there ANY reason for me to upgrade to latest firmware versions? Thanks!

Probably not the best answer, but I’m a firm believer that “if it ain’t broke, don’t fix it!”

That said, I update to every available f/w beta as soon as it’s released. I’m testing s/w so it feels like something I should do. And I should mention that there are some recent changes that might benefit owners with 120VAC power boards who are roasting 1 kg batches. Would these updates affect what you’re doing? I have no clue!

Here’s the f/w change log- starts at 562 but maybe you’ll see something that is of interest.

Firmware: 606
Experimental version where the exhaust fan runs at F1 during preheat in order to cool down IBTS and decrease dirt build-up.
Adjusted allowed IGBT frequency for 120V boards even further to increase power at very low line voltages.

@geoffrey FWIW I’m on a V2 with f/w 562 which is what was shipped with my Bullet when I received it. Based on what I’m doing for roasting even at 1kg I haven’t had a reason to attempt a f/w upgrade. Back in April of this year when SCA had their expo in Boston I had the opportunity to meet several of the folks from the Aillio team, including Jacob. I asked him about the f/w upgrade and the issues with doing the upgrade. He flat out told me that if everything is working for me then there is no reason to do the upgrade.

I know for some folks who had upgraded and roasting 1kg, being able to access F0 was desired for how they roast. With 562 I can only go as low as F1 which for me right now is sufficient for how I’m doing a bit of the heat soak after charging. I’m in the "if it ain’t broke don’t upgrade"camp

That said I may upgrade in the future when there is significantly less issues with upgrading.

Thanks to both of you.

I appreciate the reassurance that I’m not missing anything.

I appreciate the reassurance that I’m not missing anything.

Mmm… well I’m not sure you’re ‘not missing anything’, but you should be comfortable that there won’t be any ‘unwanted guests’ in the roast!