First Roast on Bullet - is this a 'smooth curve'? 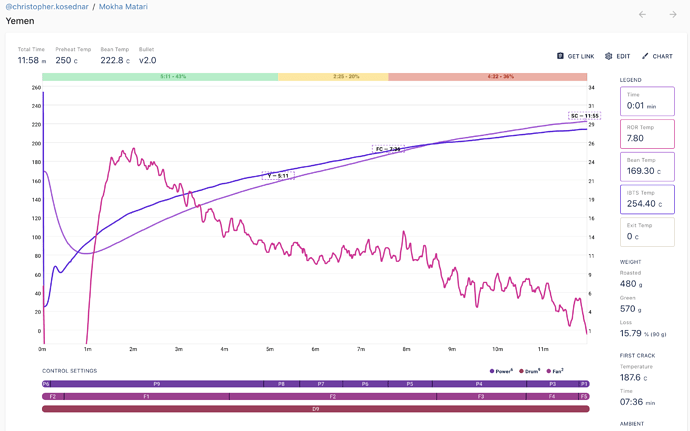 based on the sensors in the bullet is the constant ‘up’ ‘down’ of the ROR expected or is there something I can do to here?

what are the downsides to starting at a much higher charge temp?

I certainly could have pulled the roast earlier, is there a resource on bean temperature?

to prevent the dip at/after FC, i should be preemptively increasing the power?

Welcome @christopher.kosednar! Thanks for posting your curve. You’ll soon tune out the ROR up-downs and see the trend. To me the curve prior to FC looks flat. But the proof is always in the tasting! Let us know how it cups.

absolutely terrible! before this i was roasting on a behmor and only able to do light roasts before the smoke was unbearable. definitely took this one way too far. Picked up ‘coffee roasting best practices’ by rao which will hopefully help now that i’m no longer roasting by sight/sound alone.

on the behmor the goal was to get it of FC as fast as possible and pull soon after, that coffee generally tasted great but was not really repeatable in the way i expect the bullet to help me roast.

based on the sensors in the bullet is the constant ‘up’ ‘down’ of the ROR expected or is there something I can do to here?

what are the downsides to starting at a much higher charge temp?

Potential for scorching the beans.

I certainly could have pulled the roast earlier, is there a resource on bean temperature?

Try this from Sweet Maria’s: 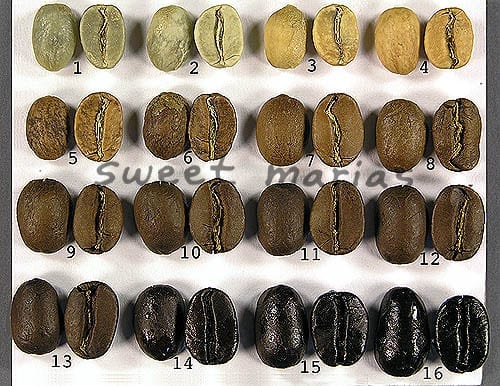 When using sight to determine degree of roast, visual changes in roasting offer important clues when used with other inputs too.

to prevent the dip at/after FC, i should be preemptively increasing the power?

That’s Rao’s recommendation. Are you referring to the dip in P-RoR after 1C starts? You can manage that P-RoR to some extent by

@christopher.kosednar @bradm hey Christopher, please be introduced to Brad. You can find his curves in roastWorld and I highly recommend you follow his curves - you’ll learn a lot from his settings.

thanks for the feedback, @bab

I was actually roasting outside on a sunny day, so one side of the roaster in the sun was hot! the other side not as much. it was maybe 55F outside. it seems plausible that this would raise the temperature of the drum, but not sure where the sensor is and whether it’s reading the drum temp or the bean temp or what? where is the actual “Bean Temp” sensor?

i’ve roasted less than 10kg so far. this was my second roast of the day and i had NOT cleaned the chaff filter after the 1st roast, maybe that was my issue.

The Yemen beans i used were pretty small so conceivable could have a lower first crack but 370F doesn’t really seem in the realm of possibilities, but the “bean temp” sensor is showing virtually the same reading. Shrug, not really sure, coffee still tastes bad! excited to roast some more.

What’s the smallest weight of coffee folks use on the bullet? it seems silly to roast in 500g batches until i figure this thing out

@christopher.kosednar your getting to FC on the Yemen beans at around 370F is in range of my two roasts with Yemen Mokha Harasi: 355F and 375F bean temp - I was roasting 350gr and 510gr respectively (feel free to look at them on roast.world). So far the smallest batch I have done is 300gr. I only have13 roasts with the Bullet under my belt (including the 6 seasoning roasts) so I am also still learning about this roaster. I lost two roast session records when RT 3.1.4 failed to record my roasts last weekend but I did noticed when roasting smaller batches is that you’ll get to FC faster depending on your PH and what P and F level you use on charge and how the temp momentum proceeds from there.

I agree with Scott that Brad’s profiles are a good study. I have been trying to mimic his, util’s “696” profile and julio’s “heat sink” profile to understand the dynamics of this roaster and the resulting cup - I try to use the same bean.

P-RoR = Rate of Rise derived from the Probe… i.e. the Bean Temp probe. The name P-RoR distinguishes it from I-RoR which is rate of rise derived from the infrared sensor in the IBTS. On the Bullet’s control panel IBTS is referred to as Drum Temp… a label left over from the original V1 Bullet which also had an IR sensor but that measurement targeted the drum. Unlike the V1 IR measurement, V1.5/2 Bullets use IBTS which also uses an IR sensor but it targets the inside of the drum. So IBTS can measure radiated IR data for beans as well as drum temp when the drum is empty.

RoR is a plot of the calculated slope of bean temp & IBTS temperature curves. Currently you can only see I-RoR within RT3 but it will eventually be available in the graphs plotted in R.W.

The induction coil that heats the drum is located on the bottom of the Bullet. Since the drum rotates clockwise (viewed from the front), you should expect the outer left side of the roaster case to be a little warmer than the left side. But the difference you feel with your hand is pretty small. No clue what effect solar radiation would have on the roaster case but I can assure you the white roof of our RV picks up a huge amount of heat from the sun. So I wouldn’t be surprised if roasting in the direct sun affects some of the data.

Edit: I checked this yesterday during and after a roast. I couldn’t tell much difference between the left or right side of the case but the top was warmer. So just ignore my thermo-babble… heat rises; end of story.

where is the actual “Bean Temp” sensor?

You’ll have an opportunity to get up close & personal with both when you do maintenance to clean all the left-behind residue (oils, chaff dust, smoke… whatever) that collects on the inside front plate, on the probe and to a lesser extent on the IBTS’s IR sensor.

What’s the smallest weight of coffee folks use on the bullet? it seems silly to roast in 500g batches until i figure this thing out

I think the Bullet manual suggests a smallest batch size of 350 gm though some here have been doing smaller batches. Not sure what the effect is on roaster performance/safety with smaller batch sizes. I use 550 gm batch size as it comes out very close to 1 lb of roasted coffee after weight loss.

IBTS (DT) is (pretty much) independent of batch size; BT, however, is affected by the bean mass- the larger the batch size, the closer BT comes to DT during the roast. I’m basing that on my roaster where BT & IBTS don’t reverse position during the roast. I’m of the opinion there is an IR sensor calibration difference between your roaster and mine of about 30F°. Since mine is not any kind of “standard”, I don’t know which roaster is right. I use the measurements in that paper written by Thompson Owen linked above which seem to match, but YMMV.

Sweet Maria’s YouTube has a video of a roast that T.Owen did a sample roast of 150gr I believe. It’s doable but I think you’re not going to be roasting it anywhere near the same as 550 gr or even 350gr. Sample Roasting in Aillio Bullet - YouTube

If anyone out there have done some 150gr sample roasting I would like to see what your profiles look like - it is not possible to search R.W based on batch sizes - so I can learn from your experiences.

Finally a post that explains better what the different temps are and what the IBTS actually measures - semantics is so important so we all know what we’re referring to!

(sorry had to throw that in … been steeped in the world of semantics and data in my day job!)

@bab just re-reading your post - May I suggest we all settle on B-ROR for the bean probe and I-ROR for the IBTS probe? Just wanted to try to avoid confusion with semantics

Sorry for the delayed response… a few chores got in the way.

I agree with consistent and accurate labeling in principle but I’m afraid that train already left the station. The name IBTS defeats the plan form the start…

So I’ve come to mix the terms (though not rigorously) so each gets mentioned for a given purpose. Hopefully another Bullet owner will recognize the term they clarifies the content for them.

Of course, 6 months down the road it won’t matter anymore to today’s newbies as they unintentionally dazzle the new crop of owners that wonder which measurement the writer is talking about as they ponder which one is correct to use. “I wish they’d be consistent!!”

All I can say is that it does get better.