Help! Getting Plateaus Between 6-9 Mins

Hi all. New to the roasting game, and I have a Honduran Icatu roast that I am getting consistent plateaus between 6-9 mins, even while decreasing power. I have tried using more or less fan in this time, and each roast still seems to plateau at this point. Any ideas on things I could do to get a more consistent downward curve? Thanks! 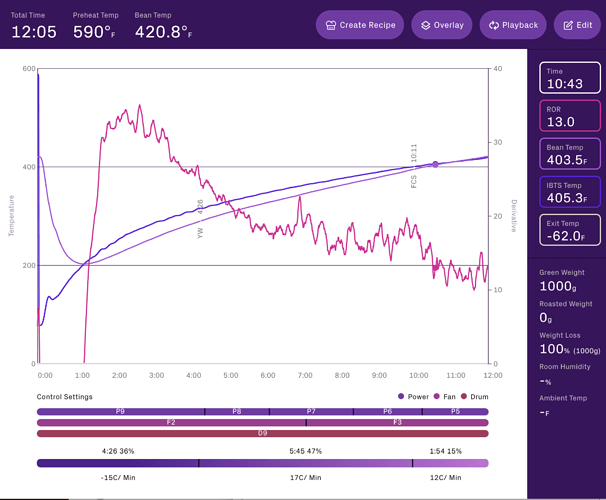 I would be tempted to swap the P7 and P6 around so P8->P6->P7->P5 and or start your fan one level higher F3 and increase to F4. But I roast in Celsius so what do I know

That’s helpful - I’ll give it a shot! I was roasting in Celsius but ultimately gave in to Fahrenheit since all my roasting videos I wanted were using Fahrenheit.

Given all of the feedback on the Facebook page I wouldn’t be inclined to try to change this. My guess is this roast will taste much better as is than it would if you were to actually pull back on the energy just to get a smoother declining curve.

The beans are moving into their endothermic reaction as part of the roast process (for the sake of completeness, ‘endothermic’ means the beans are giving off more heat than they’re absorbing from the drum). Pretty much normal though you can still influence the slope of RoR with power & fan. Starts happening after the yellow point and into FC, then quickly changes sometime after the mid-point of FC

While you can intentionally influence the slope of the RoR curve with power and fan (or even stall the roast), you should expect at least a little flattening in that area. The extent of that flattening depends on the beans and what you’re trying to do thru heat control. E.g., for some beans I prefer moving the heat to later in the roast instead of at the front end, so I expect to see a profile that greatly exaggerates your profile.

Frankly, I would do a smaller batch, if you are concerned with the flat ror. Your primary issue appears to be that your ror declines fairly rapidly at the beginning, not allowing you to keep it high enough through the middle to both maintain momentum and a steady decline. Maybe try 800g and report back.

I think my next experiment to be honest will be a flat RoR up to FC then start the decline based on various threads. I am starting to wonder if the significantly lower thermal mass of our roasters means that the “traditional” wisdom of the Rao Curve may not be in our best interests…

Something to do at the weekend

There’s no doubt in my mind that mass, power & venting differences make scaling a giant down to its 30 lb equivalent a convoluted guessing game. Issues of scale and (in my case) an uncontrolled operating environment have left me wondering. Maybe that’s just sour grapes cuz I’m not as good at it as I want to be. Setting that model aside has made me a much happier roaster.

Try using the drum speed more actively. With high batches you can run slower revolutions in the beginning to get more conduction from the hot drum (and consequently less convection) with beans not flying that much. Just make sure you do not get scorched beans. Then gradually raise from initially D5 to D9 at the end where you want to be able to control ROR with the fan speed - ie you want the beans to fly again. 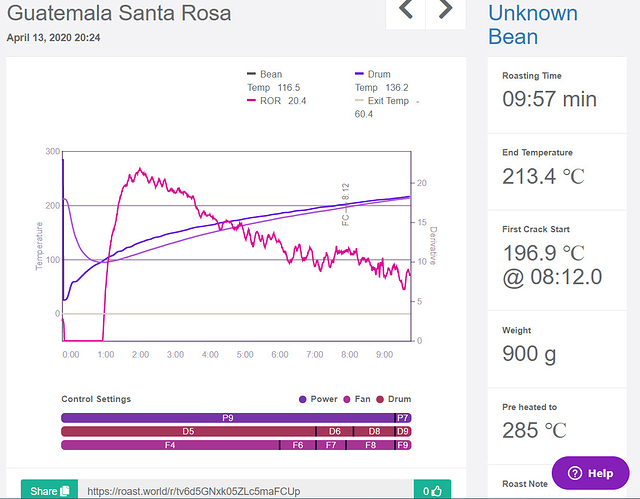 I tried for a while to roast with changing drum speeds. Gradually increasing the drum speed makes it much easier to get a nice declining ROR curve, (if that is a goal) The resulting coffee was always a disappointment though. I understood that changing the drum speed during the roast also changes the time a bean is in contact with the bean probe. ( longer contact heats up the probe more) And thus corrupts the Comparability of the Successive readings of the ROR. So I stopped manipulating the drum speed.
Apparently @Lav1, you get good results this way. It seems also that less energy is needed, when starting with a lower drum speed. Maybe time for another try.

Your curve looks amazing. Really interesting to know that your Power remains mostly at 9 and the main change is the Drum speed. A very different approach as compared to most others, including mine, where the D is constant and it is the P & F that is getting manipulated to achieve the desired curve/roast.

But the $64k question is, for our roasters, does an amazing curve actually translate to amazing coffee ? Or are there some edge cases where the Rao Perfrect RoR in fact doesn’t work/apply…

I would honestly be very surprised if once curve fits all machines and underlying technologies - gas, electric, fluid bed…

stuart hits on points that people are finally starting to realize with the Bullet. There is no one curve fits all and the Rao philosophy does not necessarily apply to the Bullet. On the Facebook page there are numerous posts about people who have beautiful curves and the coffee tastes poor. I stopped chasing the curve a while ago and my coffee roasts have improved greatly.

Don’t ask me why but I’ve been watching a few YouTube videos of pilots landing at various airports and talk of the glidepath kind of reminds me of the RoR curve. The aim of a successful “landing” is to get on the runway, not short and not long. But after that I guess you can scare the bejezzus out of your passengers by coming in at 10000 feet and dropping like a rock on final approach or you can drop a foot at a time from hundreds of miles out. Somewhere in there is a balance. And I think a reasonable simile for us - I’ve started to set waypoints for time/temperature for things like dry end, first crack, drop temp and use Artisan to predict whether I’m on that glidepath. To be fair, I think Rao just said a “declining” RoR was something he noticed in good tasting coffee - he never mentioned the angle, whether there were a few little bumps along the way. Maybe we too that and ran with it a bit too far…

As those old pilots say, any landing you can walk away from is a good one. And avoiding the “did we land or were we shot down” in coffee terms

The only thing not mentioned is how Rao goes to great lengths to justify flicks/crashes leading to baked flavors. On my gas roaster I would go along with this theory…not with my Bullet.

I agree with this. And adding to it, the ROR on the bullet is in fact the ROR of the temp probe, which does not necessarily reflects the ROR of the coffee beans all the time. I guess this is different compared to bigger roasters with lots of beans and inertia due to the bigger volume. So in my view when chasing a perfect ROR in the Bullet, we are chasing artifacts.

I switched to Artisan (had used it for years with my HotTop) to try and make use of the IBTS derived RoR but I gave up because it was so erratic/sensitive that it would have been worse than useless. So I’m using the old school RoR from the temp probe but my standard batch is 900g so I would hope that’s one stability factor.

I couldn’t find anybody documenting what the best “glidepath” angle was on the “ideal” RoR - 15,30,45,60 degrees ? I appreciate that will change based on the axis scale but never saw anything expressed in ratios - ie by half the total roast time you should be at 80% of your initial RoR say…

Probably also depends on the “runway threshold “ (far away for your dark roasts), and the altitude, (pre heat temp.)starting you final approach. No single best glide path for every bean and every degree of roast.

Like so many others here I read Rao. I felt like I got nowhere by blindly trying to replicate RoR curves he drew with a drafting aid. Unfortunately, I don’t have enough training to get the most out of what he wrote. But I did see one graph that shows 4 RoR curves depicting 4 peaks in time ordered sequence of what I interpret as equivalent to the Bullet’s RoR…

That one chart seemed a summary to the whole process in terms I could get my head around. If I hit the beans with a lot of heat in the front of the roast I should recognize the most acidity those beans could offer. Delaying that peak by using a little lower pre-heat and a little less power ought to move the emphasis toward aroma. Still lower pre-heat with power settings that rise after charging should emphasize body.

I’m not a fan of a lot of acidity and I’m afraid that coffee that smells great in the cup but lacks flavors I appreciate is lost on me. The fourth choice of emphasized bitterness was a no-brainer. So I guess that must mean I’m a fan of body, though frankly I’m not sure the definitions of body (‘mouthfeel’?) does much to help me understand.

Without understanding all the subtleties of cupping, I concluded I needed to move the heat toward the back of the roast instead of the front. I also needed to choose beans that lend themselves to this kind of roast (I buy beans with a description reads like a chocolate sundae). When I did that, any comparison to the ‘classic RoR’ curve, however vague, disappeared from my charts. But the coffee (my 3-point scoring system: +1 is good; -1 is bad; 0 is ‘not-great-but-drinkable’) seems to have more +1’s than -1’s.

And at this point roasts started running longer because I was moving the heat to later in the roast. Yeah, I managed to violate the extremes by stalling the roast a few times, but eventually I got to an approach that seems to work for me. I’m not about to discredit Rao! But I am convinced that a 50kg gas-fired Probat doesn’t scale properly to a 1kg inductively heated Bullet.

And while I’m on the soap box, I want to say thanks to @quartzglen who cautioned to let the Bullet heat-soak before starting the first roast. The f/w lets Bean Temp flatten out at about 260°F before announcing Charge. But that isn’t where Bean Temp will be when you charge the 2nd load in back-to-back roasts. So now I let the Bullet talk to itself for about 45-60 min before charging the first batch. Thank you for that!

Agree 100% re heat soak! I started doing that a while back and it proved to be really helpful in getting consistent temp performance (also why I wouldn’t mind it if “Charge!” could be silenced). I need to go back to the plot you reference in Rao’s book - my last couple roasts have seemed bitter. Thanks for the reminder.