How to get higher color consistency?

I’m new pretty new to the Aillio. Maybe did 20 roasts now give or take. I’ve roasted on the Behmor before for maybe 7 months.

I’m just wondering how do you all achieve good consistency in terms of uniform color when roasting?

I’m roasting 350g, usually start at p6 or P7 and drop it throughout. It’s just that the color consistency is not where I want it to be. I’ve dried various fan speeds but not sure if that’s the issue.

Not qualified to help anyone but I’ll offer a couple thoughts.

If you would expand a little: what is the issue with color consistency? I.e., is the color inconsistent within a single roasted batch? or is the consistency varying from batch to batch?

Variations from batch-to-batch would seem to point to differences in Bean temp when you eject the beans. In the 2nd chart it looks like the roast stalled after 1C even though you stretched it to get to 185°C. That’s to be expected if you lose too much heat after 1C. The 1st chart had more momentum at 1C and finished better but may have needed to roast longer to get to the same end temp as the second chart (it’s 11C° short of finishing).

As I understand it, the increase in RoR at 1C is to be expected as the beans go from endothermic (absorbing heat) to exothermic (giving off more heat than they absorb). If you try to manage the roast to keep that flat you’re going to lose too much heat and Bean temp will flatten out. For the time being try setting aside what you read from Rao and just focus on consistency from roast-to-roast and finishing at your intended target Bean temp. I’m not suggesting you abandon Rao, just focus a little more on becoming consistent with roaster operation as a starter.

My issue is color being inconsistent within a single batch. I had similar thing the behmor, but I managed to fix that using the faster drum speed throughout the roast.

Now I’ve read a bit, and some say that color variation within a single can be due to there not being enough room for the beans to move evenly. That’s also similar to what I was doing with the behmor, roasting 200 grams instead of 300 or higher.

Someone was also saying that it might be the other way around. That 350 grams is not a big enough batch for the bullet.

And no, I’m not using pre mixed, nor does my bag contain a lot of quakers. I’m just comparing my profile on the Bullet to the Behmor.

The images I included are just two different approaches I was taking for roasting.

Ok… I see where you’re coming from, and why you chose D9 for drum speed. And I didn’t get what you were showing us with the chosen screen shots.

The minimum batch size for the Bullet is 300 gm. Since you’re using 350 gm you should be fine. Some here have successfully tried smaller ‘sample size’ batches. For the first few months I had my Bullet I roasted 300 gm batches and didn’t have an issue with uneven roast color. During that time I didn’t have any control over drum speed (I only just realized that when I replace the power board in my Bullet 2 weeks ago and suddenly it works). At this point I can only guess but I think I’m right that drum speed on my roaster was locked at about D7.

So with that as background and realizing higher drum speed generates greater centrifugal force, I’ll make a wild guess the beans may not be tumbling adequately with each rotation, i.e. the outer beans (those nearest the drum surface) are staying near the outer layer. Pure speculation on my part but I have a hunch I’m right. And it’s really easy to check.

I just looked back at a couple of those old roasts and see I left drum speed set at D8, but not having any control I have no idea what the drum was really doing.

Unlike the exhaust fan, there’s no calibration cycle for the drum.

I tried to roast again this time increasing the batch size to 600 and adjusting things accordingly. The variations in the color were still present so I don’t think it’s the batch size.

I tried another time with the 350 size but decreasing the drum speed to 6. It just completely ruined the profile lol.

I think what I will try to day is start with D8 and then do D9 half way and see how that compares to my current profile.

One other thing you could check is to measure the drum speed. Just mark the end of the axle shaft and count revolutions for a minute. Here are my results on a cold V2 machine:

It’s unlikely yours are much different, but…

Do what Brad suggests- measure drum rpm to see where you stand. Especially since I haven’t heard others mention this before.

I would suggest staying away from D9 till you get drum speed resolved to your satisfaction.

re: batch size… I would think anything in the spec’ed range (0.3 kg to 1.0 kg ought to work properly/evenly.

edit: when the color is uneven, how does the coffee taste? is it in the right flavor zone? way off?

How would you measure drum speed? I was checking the log/info section but nothing indicated drum RPM or anything of that sort.

In terms of flavor it tastes pretty good. Very close to my more uniform batch from the Behmor but maybe a bit lighter. Checking the weight, I’m judging that it might need to go a tad darker, but slowly. As when I just increase the development time (is that what time after first crack is called?) i end up getting scorched beans.

Give it a try with Matt’s suggestion… with the drum stopped, mark the end of the shaft with a marker pen. Then with the drum rotating at each D# just count for 60-sec. Or if watching for that long for each D# numbs your brain too much, count 10 revolutions and divide by your stopwatch reading in seconds, then multiply those rev/sec by 60 to get RPM. In the latter method, just remember to start your count at zero as you start the stopwatch or you’ll be off by 10%.

Having the taste about what you expect sounds encouraging. It makes resolving the uneven color more in the area of fine tuning.

Your roasts on roast.world all appear to be dropped between 200C - 206C (IR temp). For me these are very light roasts, and I would expect color variation to be much more pronounced than say at a City+ level around 215C. Did you drop the Behmor roasts equally early? Not sure how bean temperature is measured in the Behmor, but it might better correspond to our Probe temperature.

Interesting point. That’s also something Im’ considering. I will try another darker roast and see how that goes.

Yeah, there is no bean measurement on the Behmor. But I will try and see how that works today

… Yeah, there is no bean measurement on the Behmor. But I will try and see how that works today

Interesting- how do you know when you want to eject the roast? Color & aroma only? I have the impression the Behmor drum is removable leaving no way to put a probe in the bean mass.

Trial and error. I used to just wait a certain amount of time after first crack and that was that.

I think there were many things I was doing wrong, but somehow managed to get a decent flavor.

At what temp do you gents eject the roast? I’m looking for medium/medium light.

I tried again last night to eject around 210 and the roast was much more uniform in color, though the roast was a long one…
https://imgur.com/ZEJAkYU

I tried again, but with a bit of a power push to cut the time but, it ended up reaching first crack with super low RoR so even after waiting 2 minutes, the roast was still around 205 degrees and the roast came out like my previous results…

I try to make the time after first crack be around %22 but I’m not sure if that’s enough to reach a higher been temp like 210 without RoR going back up again.

My goal for today’s roast will be to reach first crack around after 9 minutes and maintain enough ROR to eject around 210 degrees with %22 development time. Will also cup yesterday’s coffee and see.

At what temp do you gents eject the roast? I’m looking for medium/medium light.

What follows are my preferences… there’s no reference docs that detail what I’ve come to follow. Just my opinion/taste preference. But in general…

The end temp depends on the beans. Most of what I buy is touted for chocolate flavors and most often require a FC or FC+ roast (C = City, FC = full city). I typically use IR data (labeled Drum Temp) to track the roast. That sensor is prone to contamination on my machine so I often have to add a little ‘Kentucky windage’. A FC roast requires getting to about 444°F/229°F and a FC+ roast is higher at 454°F/234°F. I have one blend that can handle Vienna which is just North of 454°F.

Additionally I prefer a roast that adds the roast-heat a little after charging the beans. I only recently learned there’s a name for this- something called a ‘heat soak’ (look for a few posts by @quartzglen … definitely not a Rao-ist approach to roasting). 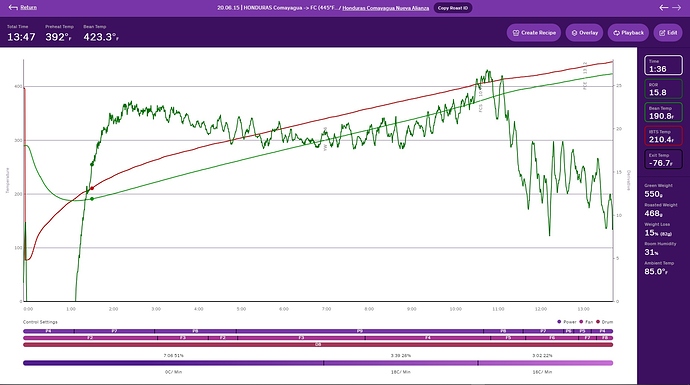 You’ll notice the roast runs longer than what most here would prefer. The approach isn’t common among those that post here and I’m not suggesting this is the way you or anyone else should roast their coffee! It’s just what seems to work for me. I’ve been roasting since late 2003 and consider myself a beginner… I still experiment. A lot!

ps- I suspect ‘experiment’ might be scientific vernacular for ‘failed roast’!

Thanks a bunch. Managing to exit on those temps really helps with consistency.