I-RoR Crash and flick after 1C

With the addition of the I-RoR curve tracking I noticed that all of my profiles showed a crash and flick in IBTS RoR after 1C that didn’t show up on the traditional probe. I’ve done about 10 wildly different profiles at this point and they all crash - from low pre-heat low and slow to hot preheat race to drop temp. All on 450g batch.

Is this happening to anyone else? If you’ve noticed it and fixed it I would like to see your profile. I can mitigate it with some unrepeatable fiddling after 1C but I would prefer to have a recipe I don’t have to watch so closely.

Here is an example. RoastWorld doesn’t show the I-RoR curve but you can see the stall and then flick up in the IBTS curve

Is this happening to anyone else?

Yes, that‘s happening quite often with different roasters depending on the beans. I have it with my current Hottop as well. Scott Roa describes this effect and countermeasures in his best practices book. You can raise the power appr. half a minute before RoR crash for a short time - Scott is naming it „gas dip“ - to prevent the crash.

Gas dip is not easy to manage and you must be confident with your temp probe data.
Before trying this, you may try to not drop gas, or increase the fan speed too close to 1st crack. Too close and you’ll end up with flattening and flick, too early you’ll crash and flick.
I don’t know why but I can’t see your curves.

This is a WAG, so treat it with caution-

At 1C the beans are going into the exothermic phase which means they are giving off more heat than they absorb from the drum. At the same time the beans are “cracking” opening and it’s my guess that the gases given off (something creates the pressure to open them- I assume more water that didn’t exit during the drying phase) are interfering with the IR emitted from the bean surface. Since IBTS uses that IR emission to measure temp I’m guess the reading is interfered with by that gas (water or ??). As 1C ends those emissions diminish as shown when IBTS approaches BT till they are very close to the same value.

You may have a different take on it, but It’s all part of the Maillard process.

Edit- That flattening then reversal of the IBTS slope is also confirmation that 1C is starting/ending.

Yes happening to me too, especially the flick. Here’s a roast that looks OK on BT-RoR, but I dropped it a little early because of the flick that was developing on IBTS-RoR
: 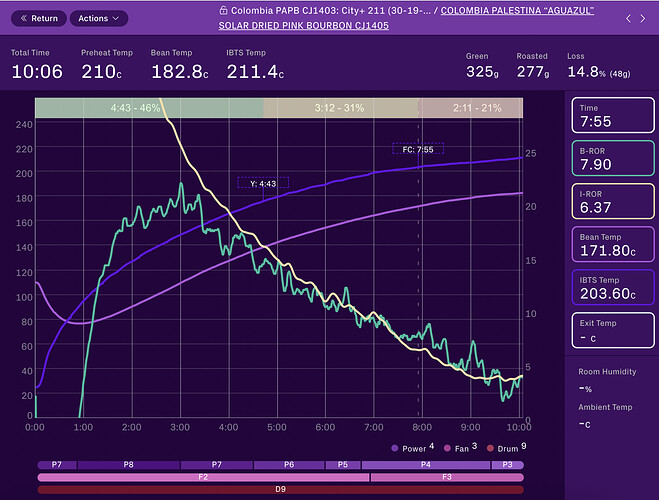 Here’s another one that looks OK on BT-RoR, but IBTS-RoR tells another story. It’s visible in the IBTS temperature curve too, something I’ve noticed before and sort of ignored: 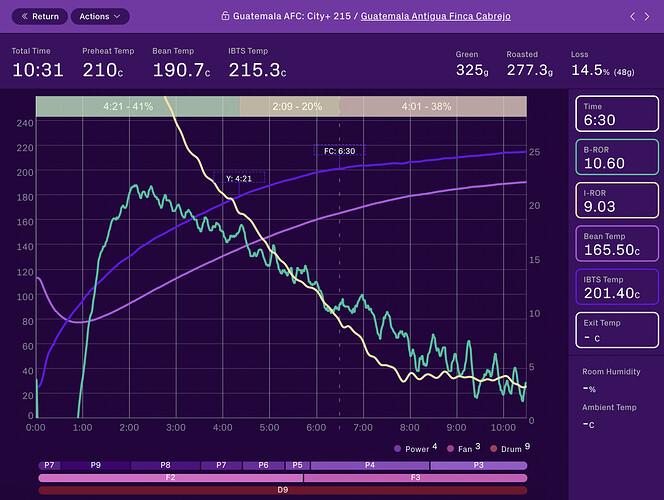 IBTS-RoR gives us some very cool data, just not quite sure what to make of it yet. For these small 325g batches it’s tempting to trust the IBTS over the BT, which may not be very well immersed. Any ideas?

And here’s one more interesting phenomenon: This bean likes to spike at FC, which I’ve been managing for the past 4 or 5 roasts with a gas dip. However… skipped the dip for this roast. Sure enough, the BT-RoR spiked, but IBTS-RoR did not! So IBTS-RoR suggests that the spike in BT-RoR is fake! Who’s lying? Could it be that the BT-RoR spike is actually a jump in something else, say humidity, that temporarily improves thermal conductivity of the probe so it picks up the bean temperature more easily? 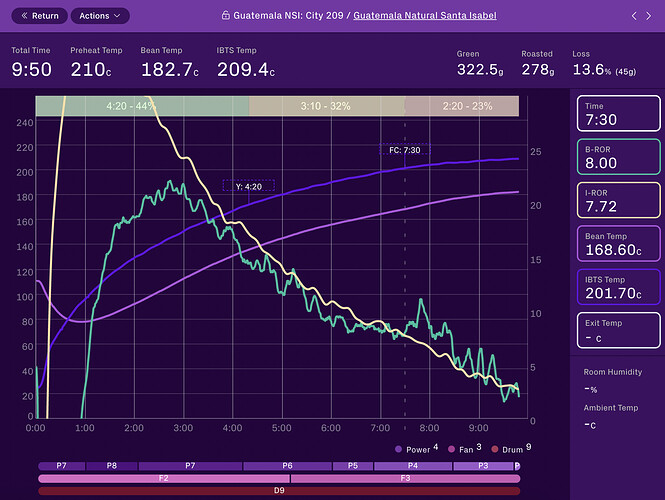 Could it be that the BT-RoR spike is actually a jump in something else, say humidity, that temporarily improves thermal conductivity of the probe so it picks up the bean temperature more easily?

That is what I think is happening

This is a very interesting thread. I’m going to expose my naivete - does it really matter to have to try to control that dip as long as it reasonably “recovers” and the end result is still good? After all we are working with an organic ingredient (the beans). I’m thinking along the similar lines as @bab that the expansion of the beans at FC is likely cause of that dip and depending on the moisture naturally in the bean along with what temp it was charged at and how quickly it reaches FC might manifest in the dip (or spike or no dip/spike). Just my personal theory on this

I think the main thing to take away from this is that the occurrence is to be expected… IBTS & BT move toward one another as 1C begins and as the crack progresses they nearly coincide. Whether IBTS descends toward BT or BT appears to climb toward IBTS, the difference between the two readings diminishes rapidly to the end of 1C then at a slower rate after that point. If you take the roast past 1C the 2 curves will get even closer. In trying to stretch the roast as I approach 2C I’ve managed to stall IBTS while BT still continues to rise slowly. I kinda paniced when I saw that but the result was ok.

Not a clue about spectral response of the sensor… haven’t seen it mentioned here.

BTW, coffee_5624a418348c, what you have is not a flick and crash (Rao describes it coming in that order). ROR curves are noisy, and your curve is a good example.

I follow a tip from BradM, who suggested getting to an ROR of 10 at FC. That would mean reducing heat earlier, maybe adjusting power to P5 at 5 minutes or so.

Unrelated question but how are you getting such smooth I-ROR lines???

Mine fluctuate all over the place at the start and then smooth out a bit but yours looks almost drawn with a ruler! Is it just I changed fan speed more where it looks like yours is more power controlled? The large fluctuations at the start usually mean I just ignore the I-ROR graph for the most part. 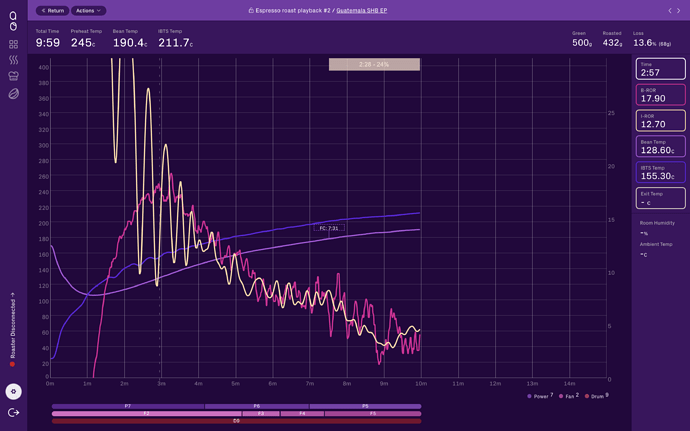 I do like to use as low a fan setting as possible (just enough to pass the “lighter test” and remove most of the chaff), and modify power to control RoR. Not everyone agrees with this but for me it’s delivered a better cup.

Thanks @bradm. I’ll try on my next roasts to adjust the power more and see if I can get it more stable. Was shocked to see consistent your ROR lines were. I’ve all but ignored my I-ROR line because of the huge swings.

I have 10 ish roasts on the new bullet but will pull and clean the sensor this week before I try again. Maybe the seasoning roasts have it extra dirty.

Thanks again for the feedback. At least the roast tasted good but would like the graphs to reflect the same if possible.

And should add - open to any other feedback on that roast as well. Still really new with the bullet so I’m open to criticism.

@bradm but you have a custom config with higher smoothing?

What was your batch size @gregv50d? I think batch size and drum speed might have an influence.

Brad,
That Pink Bourbon profile looks good to me. How’d it taste?

@jacob thanks for the reply. The batch size for that one was 500g. Suspect that’s the issue? Let me know if there is anything I can help diagnose. This all on stable but can move to the beta if that’s stable enough to test and rerun that batch.

Yep that has become my baseline profile for medium-light roasts. It works really well on the pink bourbon - sweet, fruity, good balanced cup. You can vary the duration of each power segment and the time when you bump the fan up to F3 as needed to match the IBTS temperature curve for similar beans.

That roast comes fairly close to the magic formula of 45-35-20 time intervals and 30-20-10 average BT-RoR intervals (in F/min). The profile needs a little fine tuning to hit the formula for each new bean.

When I Updated to Roast time 3.1 (where I-ROR curve was available) all previous roast showed smooth I-ROR but current roasts aren’t smooth as the previous.