Ok. Just started using RT3 So I just roasted 5 times (coincidentally after a deep cleaning of the machine), and the IBTS is reading about 20 degrees F too hot now. Something is really weird. My eyes, nose and the technology were NOT in alignment. My FC are all over 400 now, like 406… I’m dropping a roast at 90 minimal development time, the beans are a light to medium roast and the IBTS is 435-445… and my yellow is coming in at 345 instead of 330. Initially, I thought maybe the IBTS cleaning, but looking back at my roasts when the machine was new… these temps now are wrong.
HOW does one verify the calibration of the IBTS?
\

A couple things I’ve been doing to decide when to clean the IBTS start with looking at the difference between IBTS and BT at a specific BT. I use BT = 300°F and I calculate the difference between IBTS and BT. A clean IBTS will display a 40F° to 42F° difference at BT = 300°F. I let that deteriorate to 37F° difference, then I clean the IBTS. This has worked reliably and I’ve had very little trouble keeping IBTS-based roasts consistent with my 550 gm batch size.

However I just discovered something and it may relate to what you are seeing. I always roast 550 gm batches but because of something I came across relating to RoR I tried a 0.8 kg batch and a 1.0 kg batch. That didn’t go all that well but when I looked at the roasts later I saw that the larger the batch the smaller the difference between IBTS and BT. So I went thru a bunch of data and this is a clip from a spreadsheet of theat data (the 300 gm batches were what I started with in Jan 2019): 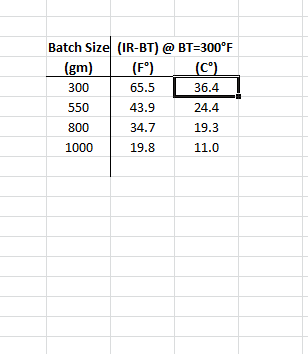 It looks like the difference between IBTS and BT at BT = 300°F varies significantly depending on batch size and we probably have to be a little cautious in interpreting that difference. With this in mind, can you rationalize the variance in BT vs. IBTS with your recently-cleaned IBTS lens?

Also, I treated the measurement data above as though IBTS is independent of batch size. My thought was that the BT probe is buried in the bean mass and that the bean mass is what varies with this data spread. Yet I used BT = 300°F as the reference point for calculating the difference between BT & IBTS. In hindsight that’s inconsistent with my premise of variations being driven by batch size. So I’ll have to reexamine this data to see what pops out.

For a single batch size, however, I feel using the difference between BT and IBTS at a specific temperature is still a valid way to determine when to clean the IBTS lens.

Edit- there is an additional variation which depends on what bean is being roasted. It’s complicated.

I really like that you’ve observed the degradation of the IBTS on a 550g batch. Really good info!
And yes. the bean probe is radically different with batch size differences. A 800g batch for me will almost always merge at or near FC and finish almost the same temp. My issue was the IBTS was diverging from the bean probe. The temps are reading higher and the gap is growing, by my best guess, 15F. I used a bean that I’ve roasted over 30 times that has an incredibly consistent YL mark and FC temp and I always call those markers in the blind. I don’t use the temp gauge. so 331 should be YL and 398 is FC. now those points are way higher on the ibts. I’m swapping out the IBTS. I’ll see what happens. What this HAS done for me is make me pay a LOT more attention to the bean probe temps, not rely on the IBTS solely, and probably going to narrow myself down to 3 different size roasts only. maybe a 300, 600, 800 or something. I’m going to have to go back and look at batch and bean probe correlation.

A new IBTS sensor put everything back on expected profile. It gradually failed at about 130 roasts. was reading 15 degrees F high.

Hi there, thanks for sharing. i’m experiencing the same issue. Is there spare part for IBTS?

Just a new IBTS. Have to work out the diagnostics with Aillio. I showed it via many graphs. Roasts etc.

How did you do that? I have the same issue, but I cannot figure out if it’s working as intended or malfunctioning. After cleaning IBTS for first time, my FC is coming 10-15 degrees higher than normally. Also higher than when it was new.

… After cleaning IBTS for first time, my FC is coming 10-15 degrees higher than normally. Also higher than when it was new.

After roasting several batches, and assuming you do a good job cleaning the IR sensor, you should see a rise in measured value at a repeatable reference point- typically 1Cs but the effect at 2Cs can be equally noticeable. There are additional variables like ambient conditions and changes in moisture content.

Yes, I guess I don’t understand why it’s 10-15 deg (celcius) higher than when it was brand spanking new? But other than the shift in the curve it seems to be working fine.

… I guess I don’t understand why it’s 10-15 deg (celcius) higher than when it was brand spanking new? But other than the shift in the curve it seems to be working fine.

I can only speculate about the source, but something was blocking some of the IR… something left over from the mfg process? something from the first roast? Dunno the source.

The Bullet has a fan installed in the control panel pedestal which blows down thru an opening in the control panel, past the IR sensor and out thru the front plate into the area of the drum. That opening in the front plate functions as a view port for the IR sensor as well as the exhaust port for the IR sensor fan. If it weren’t for the fan, chaff could reach the sensor and leave debris on the sensor surface. The fan, however, is operating at 16,000 rpm +/- and should keep that from happening. Yet it does.

So until I know better I’ll assume that the IR sensor has some residual contamination from mfg which needs to be removed thru use of cotton swabs wet with isopropyl alcohol. The problem is reported frequently and I can confirm the IR-block is there in roast profiles of recently delivered Bullets… when Bean Temp crosses above the IBTS at the end of the profile, there’s some serious contamination interfering with the measurement.

Thanks sounds like a reasonable explanation. I would never know these things if I didn’t check the forum.