I am curious what temperatures people select for their target roast levels. Of course, I am expecting it to be a range as each coffee is different.

I’ve also noticed that there is a general disagreement for what each roast level means. I use the Sweet Maria’s guidelines, which is that City is the lightest roast that is drinkable, mottled in color, most likely in the middle of first cracks. City+ is in-between Full City and City, slightly mottled in color, more uniform, less chaff. Full City is before second cracks where the coffee is a uniform color, softer edges, slight oil sheen. And Full City+ is at the start of second cracks.

I use Sweet Maria’s guidelines for those definitions you mentioned but I haven’t been using temp targets because I find each bean density and their processing method seems to affect when you hear the cracks. That’s just my own observations - I didn’t try to do any in-depth data analysis to validate that observation. Coming from the FreshRoast SR500 I relied on the sound because the K temp probe isn’t too reliable of a setup with the SR500. Just my 2 cents.

FWIW I found an excel spreadsheet of temp targets that I saved but I neglected to note down the source. I’ll try to find it again to see if I can post it up here if there is interest. I don’t know exactly how those temps were determined but it was a good rough guide. LMK if interested

I’m also coming from a FreshRoast (SR800) and I find it more difficult to rely on sight and sound now. One thing that seems fairly common for me is that my first cracks seem to take much longer than they did on my FreshRoast, and that really throws off my senses. Besides, I think using the sensors are a bit more accurate than my senses, as it seems a few degrees can make a decent impact on the flavor.

The most popular notation of roast vs. color is what you are accustomed to using. Another alternative is to use a colorimeter e.g. RoastVision. There are several offerings which range all over the place in $$$.

The issue (well… my issue) is the subjective nature of identifying the exact color which represents each of those steps in the roast (C/C+/FC/ etc.). So I took it out of my hands and just use the scale adapted for the RoastVision. For the same beans the correlation between drop temp and color has been consistent. It isn’t falling-off-a-log easy in that you have to experiment with what taste you get for a given color, but once you get taste vs. colorimeter reading to your liking you can expect repeatability for that bean. My notations (Comments box) always include the color (med/med-dk/dk/v-dk/etc.) as well as the drop temp.

I suspect moisture content is related as well so I bought a cheap moisture meter but that’s a work in progress in terms of calibration- I’m not happy with repeatability of the moisture measurements much less any correlation with color/taste results. Yeah… maybe cheap wasn’t a good idea!

I believe bean density and processing method and age of beans also affects the colour of the beans. A similar profile, exact dtr, dt and drop temp has given varying colour levels in different beans.

I may be wrong, but an old natural bean (stored for long) of ours does not yellow and a cross section of a roasted one shows the inside to be lighter (consistent) than the outside. It isn’t scorched, tipped or unevenly roasted.

Of course how you get there matters a lot. That said, I generally think of these temperatures (all IBTS):

Didn’t want to write “dark roast” for 218C since dark is often used for roasts past SC. I like to use the tryer to look at and sniff the beans during the last minute or so of a dark roast, but don’t have the skills to make much sense of that information for the lighter roasts.

@bradm - mine is very similar:

Hey what batch size is this based on as I usually roast 650g batches but always hit first crack pretty much 190C and drop after 1st crack has finished before 200C but would consider the roast to be Med roast. Also struggling with either flatten at back half of roast or a flick in the similar part of the roast. I guess they could be related?

With batch sizes from 325g to 600g I’ve seen very consistent IBTS temperatures at FC for the same bean, with small variations from bean to bean in the 200C-204C range. The BT temperatures are a different story - they do vary with batch size. This is the beauty of the IBTS?

Mine is a v2 machine. The earlier IR sensors were different.

I like charge temperatures around 210C for up to 600g, although others seem to frequently charge quite a bit higher.

Rao’s “Coffee Roasting Best Practices” was helpful for me in understanding what is happening with crashes and flicks in the last stages of the roast. I’ve also been ignoring the often nasty behavior of the BT-RoR, instead trusting the IBTS-RoR which is less sensitive to changes in chaff and humidity that may be occurring at FC.

Hope this is helpful. - Brad

Rao’s “Coffee Roasting Best Practices” was helpful for me in understanding what is happening with crashes and flicks in the last stages of the roast.

So what did Rao have to say?

Awesome yes this gives me some certainty that I should be using the IBTS ROR instead of the BT. I’m using the V2 and using similar charge weights and Temps as you.
Just got Rao’s book and it’s pretty much what i learnt on Mill City’s you tube tutorials but still some good stuff in relation to flicks and dips. Thanks for your answer and i guess it’s back to the drawing board

FWIW - I also charge at 210C (410F) as bardm does for my 450g to 600g but I have been playing with a lower P6 for the 1st minute of the roast. Interestingly this weekend when I roasted the India Monsoon Malabar I had some chipping of the beans - I think this bean is going to need a different treatment than what I usually do pretty consistently now for my 500g. It’s an unusual bean to begin with

I think you may have meant this spreadsheet from an earlier thread. The last column is for the Bullet, which is pretty close to what Brad and Cash stated. My experience is closer to Brad’s numbers.

Continuing the discussion from Roast degree descriptors with temp parameters:

@wngsprd YES!! You found it. That’s what I was referring to. Incidentally I went back to look at my past roasts and when I mark FC, etc., they are more or less in the range of that chart and what Brad and Cash stated as well. It is a handy chart to have.

I found another Spreadsheet screen capture on the Aillo FB Group and re built it so that it does the conversions between Celsius to Farenheit and separated the high and low ranges.

The data, is not my my data, I just copied it and will refine it per my own observations later. It looks pretty close.

This is my first attempt at sharing a Google Sheet. Please let me know if it doesn’t work.

This is pretty cool @BillC Thanks for sharing. The Google Sheet works…I was able to view it.

BTW, it is helpful when folks like you share good info from FB since there is a bunch of us here who refuse to use FB 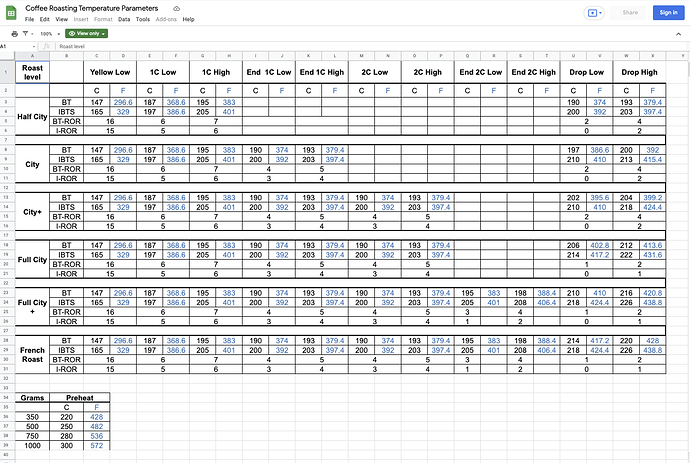 I don’t understand this sheet. Doesn’t seem to make much sense, especially when it comes to second crack. I’m probably reading it wrong, but the temperatures seem way too low for actual second crack, which happens around 434F on my IBTS.

Second crack does seem low. These are not my numbers, I just copied them from a snapshot of someone elses work (who was anonymous). I very seldom go into second crack. so I don’t have any numbers to verify that.

The original author had the low to high range posted in one cell. I created cells for both low and high range numbers because I am using formulas to convert from C to F

I put it up so that people could download it and make it their own.