I'd love to see this as the Bullet v3

I’d love to see the next bullet trade the current physical interface with an LCD screen. Don’t beep “A-02” at me, pop up a “are you still there? tap the screen”. My quick and dirty rendition stealing the LCD from the AiO. 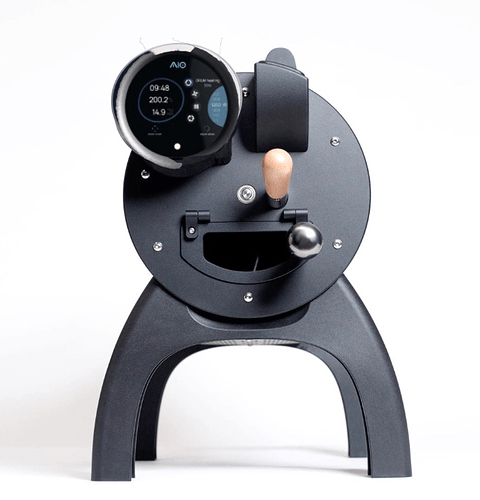 Bonus points if I can upgrade my V2 to this.

It should be possible to change the A-02 to RU OK ? with the existing panel. I’ll say here while screens are nice for display and some things are nice as a touch screen, not everything benefits from a touch screen button. A physical button is very easy to find and press. Sometimes stabbing at a touch screen to get it to listen is not progress IMHO…

@jacob any chance that might make it to the next firmware to do list ? A-02 scares the jeepers out of some people…

Well I guess in theory the control panel could be “updated” of itself. Of course the tooling and R&D costs and component shortage may make you clench a little in the buttocks department…

Or, at the very least, when using a computer to control the roaster, disable the A-02 when input is given by computer. Needing to push an additional button on the control panel even when adjustment have just been made is mildly annoying.

I actually don’t mind the beep on A-02 when I am in manual mode, to give me a time indicator for data, but it could def go in recipes and playbacks.

The problem is still liability. What’s to stop you starting a roast via a recipe and walking away for the next fifteen minutes and a fire results. The computer can’t do anything….

But I do get your point that its important to CYA.

Ah okay - I always make changes on the roaster as I like buttons not pecking things on the screen…I guess they could figure out whether the command was coming from a recipe or playback vs a person at the computer. But I think the dead mans switch is actually driven through firmware rather than a command in USB protocol…

Huge plus one to this.

Having physical buttons really reduces the UI/UX of this machine. The Bullet can communicate so much more information if they had a touch screen.
I think the AiO has one though…

For what it’s worth, I like physical buttons and simple firmware.

No, don’t replace physical buttons with touch screen buttons. It was a fad which is gradually reversing. By all means fit a better screen for data. Or plug in your computer. Or pair it to a tablet over Bluetooth like the Decent espresso machine. But please leave us buttons.

And that oddball exhaust port would be replaced with a port that accepts standard ductwork sizes.

yeah, that’s fair. I didn’t know so many people still want buttons, so having them makes sense.

But I do wish that there’s feature parity between the computer/button interface – or at least everything that can be done through buttons can also be done on the computer.

I think as is, I can’t set my charge/initial configurations on the computer right? That has to be done by cycling through the buttons?

If you’re roasting without a computer you can set most of the defaults (except now initial Fan speed) on the front panel.

If you are going the computer route, you could set up a simple recipe with just one step that sets things for you once Charge is noted. You can then fly it manually from there - Recipe doesn’t lock you out from over rides on either the computer or the roaster panel.

I feel that physical buttons are safer, i wouldn’t want a touch screen on roaster.