I'm starting my build of what I think is going to be a better suited chaff chamber. Partial 3D model has been completed

I won’t post any models before I get permission from someone with Ailio on the forums, and the final design will be posted once it is complete. This is something I plan to sell as an upgrade once if had been created and tested. If you haven’t guessed yet, it has to do with the collection of chaff during back to back roasts and consistency of roasts i.e. the 3rd 1kg roast has a lot more build-up on the filter than the 1st roast so temps and fan speeds will be slightly altered.

I had asked for a 3D model, but it may have been overlooked, so I just made my own. Using graphing paper, calipers, and autocad, I was able to get a pretty dimensionally accurate model created for my testing purposes. 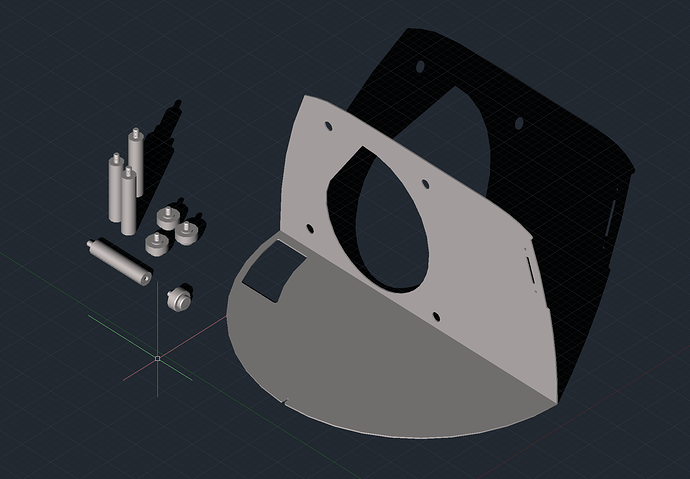 Kudos for taking this on - what’s the end goal ? I’ve been mulling over using a cyclone to pull and drop the chaff into a separate container which would permit more convenient emptying and more back to back roasting without interruption. I’ve seen a couple of people i n the past come up with some re-routing pipework using the existing fan as a suction source and either running without the chaff collector assembly at all, or drilling holes in the OEM one. The latter does make life difficult for resale of course.

If a design for the aluminium insert in the collector could be rejigged to accommodate revised cyclone pipework then it should be possible to send it to sendcutsend.com for example who could laser cut it and then maybe it could attach to the Bullet using the existing hardware “borrowed” from the OEM collector. Given the heat likely around there, I doubt any 3D printed material would last very long and I think laser cut sheet metal would be more practical.

You hit the nail on the head. The idea is to create an internal cyclone that ideally will fit inside the current housing, or will just be an additional piece that bolts on in place of the current plastic piece. Thanks for that site, that’s exactly what I was looking for.

I think it’s too cramped inside the existing casing but if the pipe work was made available to an external cyclone I think that would work for most. As I see it, we need adapters from the chaff tube which is a funny trapezoid and to the squirrel fan (again a flattened circle) to regular 2” pipe work I guess which hoses could be attached to, for the external cyclone. I have a smallish model to attach to a 5 gallon bucket that I think would be more than adequate capacity for typical roasting sessions.

@stuartmcknight wow sendcutsend.com is a really cool link. Impressive list of materials (stainless, titanium!). Thanks for this.

@prehistoricperksfut cyclone design is interesting, did some of this a long time ago. AFAIK there were empirical formulas for diameter, length, and cone angle based on the flow rate and aero properties of the particles you are trying to separate. If you dig into this for chaff please post as it’s interesting for curiosity’s sake even if a guy only roasts one batch at a time and doesn’t really need a cyclone

This is an amazing idea!! Now I’m roasting quite a lot and haven’t had the time, but I’ve had that idea in my head for months. When the season is calmer here I’m going to get to work on that.

Because cyclones are demanding in terms of diameter, angle and size, my idea is to print several models in the most heat resistant material for home 3d printers, just to know which one works better, before order something in metal.

The only thing that makes me doubt a bit is that cyclones need a certain level of airflow to work, which I do not know if the propeller of the Bullet is strong enough or it will or would we have to put something external. Also what’s happening with low fan settings.

Yes that’s the downside I can see is that at F2/F3 the cyclone isn’t going to get much love. But then maybe the chaff only gets pulled out of the roasting drum at higher speeds anyway. Attaching a stronger fan to the cyclone is likely to disrupt the airflow during roasting - much like most of us now have an air gap between the exhaust on the R1 and our extraction fan pickup…

As a shorter term goal I wonder if someone could fab up a design for the port on the bottom of the chaff collector that has a rubber plug where you are supposed to empty it. Mine is loose fitting so I taped it to stop any excitement of a chaff drop during a roast. But if an adapter could be made (in a similar vein to the ones designed for the exhaust) that went to a 1 or 2 inch size shop vac hose then for me that might be an interesting option. Do three roasts, run shop vac to empty chaff chamber. Lather rinse repeat. Of course I know at some point you need to pull the wire basket for a deeper clean but in my experience that’s after several collector empty sessions. I also have spare baskets anyway.

The issues with the shop vac attachment is that the filter gets covered with chaff and clogged up.

It does but only after three or four collector empties in my experience. It is less extensive than the cyclone but a quick fix to save pulling the whole hot collector every few roasts

@prehistoricperk this is awesome! how is it coming along?

@stuartmcknight I started roasting without the filter, just venting chaff outside, it seemed to get me a few more roasts without cleaning, then I would have to vacuum the fan out. I’m thinking about modifying the plastic housing to have a door directly across from the fan to stick a vacuum in and really get the chaff. The bottom door is the worst spot and shape in my opinion.

@lotuscoffeetea
I paused for a bit. My car skills aren’t the best, and I ran into the issue that the fan is lower than the intake tube where the chaff is pulled from. This would require a design that can relocate the “suction” higher than it currently is. I could definitely do it with hardware, as it’s been done by another guy in the group, but he did it externally. I could use something like a J shaped pipe from the fan straight out and have that pipe curve around to the top of a cyclone. It could also be done with a large flat “periscope” type piece similar to some HVAC ducting.
Then we just need a way to get the chaff out, either a metal tin with a soda bottle type thread, or something else that’s common.
I’m still thinking in it, just haven’t had time to do any real prototyping.

On the Bullet Facebook channel, there have been several threads about using a cyclone filter successfully. They have posted pictures. It is interesting. Most of the cyclone modifications require cutting holes in the chaff collector and running small air ducts to a bucket with the cyclone filter mounted on it. 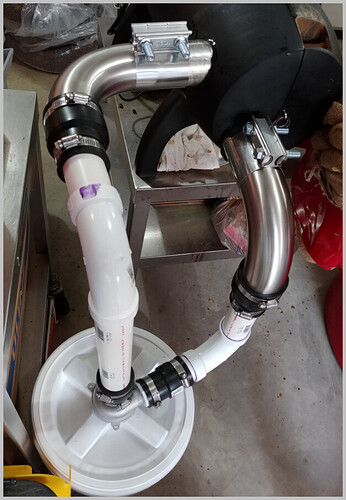 I think a very simple solution would be to buy an extra Chaff collector and chaff filter and have them ready to go.

I recently bought an anemometer for measuring air flow 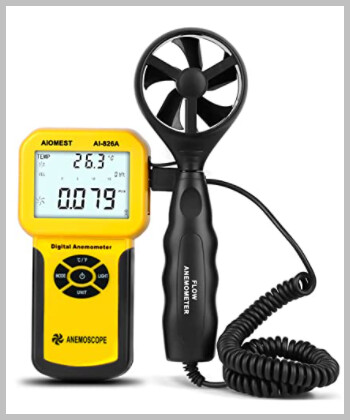 Having an extra Chaff collector and filter is probably the least invasive way of running multiple roasts without having to stop and cool and clean.

I also roast my wife’s Decaf as the first roast as there is hardly any chaff present at the end of the roast Then I will roast 2 more batches and then shut down.

I am not roasting commercially and seldom need to roast more than 3 batches during a roasting session. I have not bought the extra chaff collector. I did buy an extra Chaff filter.