Is it possible to duplicate a previous roast

Can the bullet copy a previous roast without me having to manually push the buttons?

Search the forums for how to use the “recipe” feature. I don’t use it so I can’t provide advice, but there are a number of others here that do use it.

Playback or recipe is what you need.

Using RoasTime, find a roast you like and either play it back or create a recipe from it and run it. Just keep in mind that differences in ambient temperature and other variations in the environment including manufacturing variance in individual Bullets will make it impossible to exactly “play back” roasts (even your own). For instance, someone roasting outdoors in San Diego will not reach 300ºF at the same time as someone roasting in a basement in mid-November New York.

But you can get closer if you use Recipes.

“Playback” is a time-based replay and, in my experience, can be fairly inaccurate while a Recipe will allow you to trigger changes in heat, fan, and drum speed based on temperature milestones so you can more closely replicate your target roast. I usually “create a recipe” (see screenshot) from a target roast and edit it for clarity, preheat temperature etc. This can get me much closer to what I am actually aiming for: “playing back roasts of roasters much better than me”. But it’s non-trivial to actually create a recipe from a target roast so just be aware that it takes more time and understanding compared to just doing a Playback.

So, why does Aillio offer both features especially when “playback” is what we want but Recipe is what we need? I think it’s because Playback, as implemented, is easier to understand and execute for non-hands-on users (the target demographic for the Aillio Bullet): they can get their feet wet without getting intimidated. Once they actually get roasting, eventually they will self-train and discover Recipe and find nirvana-ish.

Eventually, I will take the time to figure out how to use Recipe. I find it disheartening that there is no tutorial. I’ve read as many threads about recipe as I can find and there is not a good cohesive source of information on building a Recipe.
I expect that I will probably get flamed for saying what I did, but how long would it take someone from Aillo to write a basic tutorial?
If they made it easier to learn and implement, more people would use it. If more people used it they would be able to control their Bullet better and dial in the roasts.
I taught myself how to use Artisan to set alarms (similar to using Recipe) and dial in profiles on my Hottp. I loved that feature.

Hi @BillC - I found this pretty helpful: RoasTime Recipe Guide - aillio. It’s fairly comprehensive documentation. Also, I hope no one gets flayed for sharing their frustration as long as we are being polite about it, which you are so I think it’s all good

Thank you, This is great information.

Well for me it’s I’ve roasted a coffee that I really like, and others really like, so I don’t want to deviate from the recipe. The variables are all the same pretty much, I roast in my house. I just want to test the play back and see if I will get the same results. I tried to play the recipe back and the roaster wouldn’t automatically make the necessary adjustments of the recipe.

I ran my first recipe today and I liked it.
Now i have to figure out predicting lead and lag to minimize Flics and Crashes.

You are welcome @BillC. You seem to be a fellow engineer, or at least think like one

I am also trying to figure out prediction. Have you checked out Settings → Roast Config → Prediction?

Yeah, I am…
I have seen prediction and accidentally turned it on one time.
But I turned it off again right away.

You know the drill, eliminate variables and build truth tables.
Right now the beans have the most random and sometimes unpredictable variables: Density, moisture, and variablity within the lot.

It would be nice to be able to overlay the recipe and the chart on the same page. It would be easier to keep track of which step needs changing and how much change is needed.

What would be the fun in autonomous roasting? 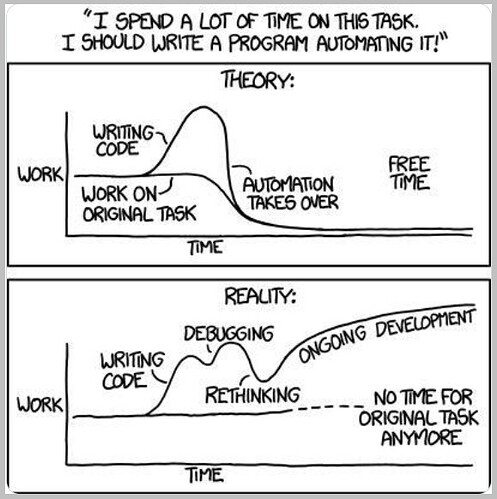 Here is a tutorial made just recently by RoastRebels, It covers pretty much everything;
Aillio RoasTime 3 and Roast.World - the complete tutorial. Installation, use and functions - YouTube

Enjoy, I know i did

Thanks, This is very good.

You’re right about the bean being the largest “unknown” and that’s why turning on prediction was something I lobbied Aillio to add; it has been in Artisan for several years I think. The problem with “autonomous” coffee roasting is that by the time the “system” has measured a deviation, it’s too late too correct it largely. The old super tanker probkem. At least with prediction on, you can see where you are headed for Yellow and FC based on your current inputs. Too fast ? Slow down the roast with fan and or power. Too slow ? Increase power or reduce fan or both. You may not get it right first time, but you will get a heads up on what changes might be needed during your roast to hit your “target”. Of course coming up with your target or roast profile in the first place is part of the “fun”.

I agree with you and will be looking into “prediction”
I only have about 2 months and 60 roasts under my belt with the Bullet and RoasTime. I am still trying to figure out basics and reaction time of the roaster.
I had a Hottop before this and a Behmor before that. ( I had even setup the Behmor with a thermo probe into the bean mass and was using Artisan with it just to watch the curve.)

One of the things that I really liked about Artisan with the Hotop was the Designer feature. It helped to build the target roast profile and then you could try to match it with heat and cooling.

The old supertanker is a pretty good analogy. But let’s add in that we are on the bridge of the ship stearing blindly while we have a runner, running from the bow of the ship to tell us how fast we are going and how far away our target buoys are. (that being the lag from the thermocouples caused by the SS sheathing) With the Hotop, when I was dropping, the BT probes were reporting 10 to 15 degrees cooler than the actual
temperature was.

The Infrared thermo stuff on the Bullet is brilliant.

One of my biggest deficiencies right now is cupping. (another deep rabbit hole)