Latest roast - OK - what could be improved?

Hello peeps, @bradm and all!

I bought 10kg of Ethiopian Guji as I wanted to spend some time with ONE bean type for a while to see and compare differing roasts. This one tastes alright, definitely has a lot of chocolate, but not so much at the subtle floral end, and not much subtlety. I don’t think it is “baked” as it doesn’t taste of cardboard! I am wondering how I should change the next roast to improve it… any thoughts out there? 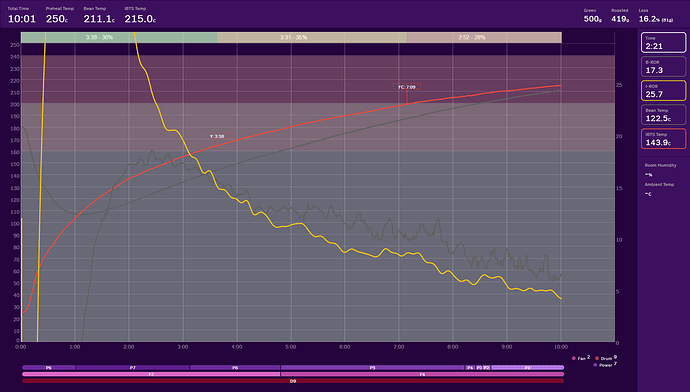 This looks like a great starting point for some fine tuning. You probably need a lighter roast to bring out the floral & fruity flavors. I’d use this roast as an Overlay for your next one. Try shortening the mid phase just a bit by extending the P7 and P6 intervals by 15 seconds each, and shorten the end by about a minute, looking for about 2:00 of development and 207C drop temperature. If you’d prefer to change one thing at a time, just try dropping earlier, at 2:00 and/or 207C. It’s very interesting to see how these changes effect the cup. Please keep us posted!

This looks like a great starting point for some fine tuning.

Thanks Brad, ok cool, I will do that next time and will report back. I should have stuck with 333g roasts as 500g takes longer to finish! I guess I can mail it to my “always ready and willing to receive coffee beans” son!
Cheers
Mark.

Definitely stick with one batch size. I have found scaling from 300 or 350g to 500g is quite different roasting. If you decide to do the overlay and tweak as Brad suggested try to use the same 500g size. I’m not using overlay as Brad does but I would imagine that using a 500g profile as overlay for a 333g roast you might not get the same behavior in the curves or if you match the curves your settings will change at different times. A 10 min roast isn’t too bad for 500g

Yeah you are probably right that I should not make unnecessary changes so I can see what the effects my minimal changes have on taste and learn something from it, otherwise I would be guessing at what the cause for the differences were.

@bradm what can I say… other than THANKS… this is now a superb tasting roast… my discerning brother says it is in his top 3 of coffees of all time!

Here is an animated gif of the two compared…

This roast manages to have both the sweet chocolate and more subtle floral fruity ends… I’m surprised the Maillard didn’t seem to get much shorter, I lengthened p7 quite a lot but p6 was not lengthened because I set the trigger by temp and by lengthening P7, the end of P6 was also later, so the increase in temp I had set for this trigger ended up making minimal difference… my mistake! But nevertheless, it’s only been 14hs since the roast, so I expect it will be even better tomorrow.

Wonderful. Looks like your 10kg investment in this bean will pay off nicely! Eager to hear what else you learn about how other profile changes effect the flavors in the cup. There is always an even better roast out there, right?

There is always an even better roast out there, right?

LOL, the human condition… not satisfied with what we have…
I’m not sure how I’d change this, perhaps after a few days I will have a thought.
In the meantime, 50% of my coffee drinking is decaf, and try as I may, I cannot get the Decaf to be GREAT… I mean, it tastes about as good as an ok cup of caffeinated coffee at a restaurant, so it’s drinkable, but just seems to have had a “taste lobotomy” - lacking in depth of flavour. I’m guessing this is at least in part due to the process of decaffeination, but can’t help thinking i could do better.
I’ll start another thread on that later today, maybe you will have some insights there too

Thanks for the help Brad.
Mark.

@mark.palmos So how did it cup today?

I noticed you start at rather high PH (but a low P6 on charge) were you able to prevent the beans from scorching by using the lower P6 at the start? Just wondering how well it worked in the cup…I would think that’s another method to let it soak up the heat initially.

So how did it cup today?

I noticed you start at rather high PH (but a low P6 on charge) were you able to prevent the beans from scorching by using the lower P6 at the start?

Hi @blacklabs
Yeah, it tasts excellent. Oddly on day 2 the chocolate end seems lighter and the sour end a bit more prominent, no idea why it would change from day 1 to day 2, we’ll see… and this observation was by myself and my brother who came yesterday and this morning for his “short long-black”. I wonder if the best way to get both ends of the taste spectrum would be to use a natural bean and roast to medium. The choc notes would be there and the fact that naturals have a strong floral fruity other end would mean there would be remnants of that too?

I don’t know TBH, but I can only theorize that there may still be a little bit of under development inside the bean itself which might give that slight sour/green note? Maybe try taking that 5-star profile and add a bit more time (30 to 60 secs?) to P7 or P6?

Well, it’s tasting really very good today, just having my second cup… I’m not sure I want to go further as I was only about 60 secs further in the roast with the *** rated roast I started from. Also, I was going from P6 to P5 at that time to help prevent the hump before FC. If I extend P6 I would lose that… unless I extended P7 and shortened P6 by the same amount.

I am curious to see how a blend of the same bean would be… one with more chocolate, one with more sourness, and use 50-50 in the grinder. Maybe a meh. It’s good to have a son in his late 20’s who will happily take all my rejects

Maybe extend the P7 by just a bit. I’m sure your son doesn’t mind free coffee beans given how expensive they are at the stores these days

Yeah, he’s visiting this weekend, so I’ll definitely be using him as my (very willing) guinea pig

Hi @mark.palmos,
Good idea to keep working on the same batch size with the same beans.
I wonder why do you start at p6 and then p7 a minute later ? It is a kind of soak ?

Personally I would preheat around 240°C, start at P8 till around 150°C on IBTS, then beginning to lower P by one every 10-15°C and avoid changing to close before and after FC (try +/-45s)
For the fan settings, I would start at F2 or F3 and increase one or two times about 20s after a decrease of P to avoid ROR bump/flattening.

Hi
kind of… trying to ease it in a bit…

Personally I would preheat around 240°C, start at P8 till around 150°C

lower P by one every 10-15°C and avoid changing to close before and after FC (try +/-45s)
For the fan settings, I would start at F2 or F3 and increase one or two times about 20s after a decrease of P to avoid ROR bump/flattening.

Thanks for the input. I will probs try it, but as I very much liked the results of the second roast I did after getting some advice from @bradm here, I think I will first see how a tweak, extending p7 by 30 or 40 secs goes. Then I will try your bolder approach. Do you have any roast profile like this I could follow, perhaps with an Ethiopian Sidamo?

This was aimed to be a very light roast.
Edit: you found it, yes the vlr#1, the second failed…

And yes this one was pretty good.
I try to apply Scott Rao’s principles as I follow his roasting course session.
I am still doing try/error tests and not all my attempts are not here as I did some batches with artisan.

@mark.palmos Are your roasts in Roast.World such that I could analyze all the variables at specific times? I just started roasting on the bullet yesterday and your roast graph is my target, I’m just having a bit of trouble figuring out when to change fans/power settings. I think if I was able to look at your graph and analyze the temperature you’re changing settings at that would help me greatly.

Also, if anyone has a graph of a great dark roast I would also appreciate that.