I had an unusual problem on my first roast today. The roaster lost a lot of beans after charging… maybe 40 gms. Not thru the door but thru the escape path for chaff at the bottom of the faceplate. Shortly afterward the drum started making a horrible scraping noise like a bean stuck against the drum. The noise was at the rear of the roaster and was accompanied with forward movement of the face plate… it bulged outward a tiny bit. About the time I dumped the beans the noise suddenly stopped. After cooling I winnowed the beans to get rid of chaff and as I did I spotted 3 un-roasted beans, each with a black spot or 2.

After thinking about it, I believe the beans were stuck between the rear of the drum and the back plate. That would (I think!) explain the rhythmic forward bulging (0.020"?) of the face plate. I was dreading having to remove the drum to get the trapped beans but they seem to have found their way out.

Other than scaring me out of a couple years of my retirement I got a nice surprise out of it all: the roaster now runs quieter than it ever has… essentially silent without beans. Must have tweaked something a tiny bit.

How do you think the beans would have gotten between the drum and back plate?

Very strange. I wouldn’t have thought the face plate could move or bulge (even slightly) with it being screwed down so well. I don’t recall reading anything here (before) like what you experienced. It would be interesting to hear the thoughts from the “Aillio Bros” on this one.

After each roast (with the drop door open) I always have to remind myself to check for a lodged bean (green or roasted) in the small gap between the front bottom of the drum and the outer housing of the Bullet. I’m wondering if that oft-reported thing led to a bean getting stuck rearward? Seems it would have to be a “green bean” that lodged since a roasted one would crunch-up when put under pressure.

You mentioned the roaster running quieter now. I’m guessing that you mean the typical gear motor noise due to certain belt tensioning that is standard on Bullets? Maybe something has altered that belt tension from where it was previously set? I relaxed the belt tension on my Bullet about a month ago and have done (6) 1lb roasts since that change. It certainly quieted that gear motor noise I’d been hearing since day-1 of owning the Bullet.

I’m not sure how it happened since I only have a view of the back as seen from the front. The beans I roasted are very small and I think that’s somehow involved. They came pouring out the chaff exit like nothing was in the way. I think the noise started afterward.

I wonder if the ‘bulging’ I mentioned opened the gap between the front rim of the drum and the face plate. That might allow small beans to leak into the space below the drum and then to the inside opening of the chaff exit. The front of the roaster is lower than the rear which ought to keep beans from migrating rearward. And that suggests whatever was caught at the rear would have to have been there already.

I’m still convinced it was a green bean (a roasted bean would have been crushed), but it didn’t have to have been from this batch. And if I set my pre-convictions aside I suppose it could have been a mechanical part (screw, whatever).

I really don’t want to disassemble the drum (especially now that it runs so quiet!), but… ??

Very strange. I wouldn’t have thought the face plate could move or bulge (even slightly) with it being screwed down so well…

The drum shaft has a spring to keep pressure on the front bearing to avoid beans jammimg at the front. If something gets lodged at the rear between the drum and the rear plate, theres nothing to keep the drum from pushing the shaft forward against bearing and face plate. The reason I noticed it at all was that the end of the drop-door handle was rising and falling a tiny amount (0.10"?) yet the door wasn’t moving. So the center of the face plate is the area where the force was applied and that suggests the center shaft of the drum was doing the pushing.

I did in fact find a bean there… it was so small it had no contact with the drum. Probably dropped into the space when the front plate got stressed. 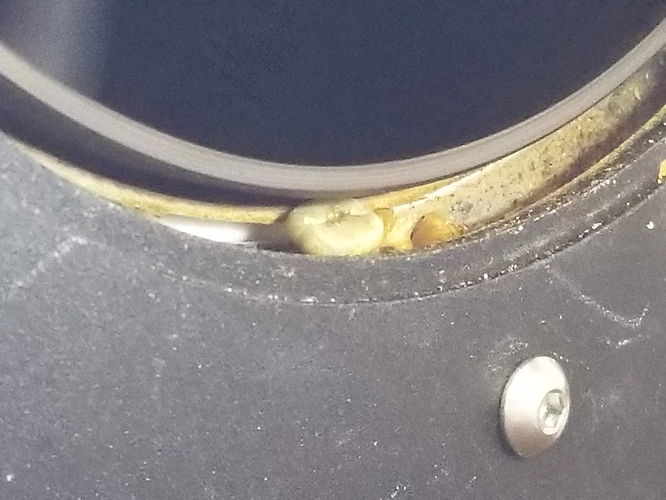 Re: running quieter… having to work from memory makes me unsure how to describe the sound. The roaster was never ‘noisey’ but, yes, there was some gear noise and some other sounds that were rhythmic and synced to drum rotation. It wasn’t loud enough to register as a problem… just part of what the roaster sounded like. But the current silent running makes me realize there’s a distinct difference. Hope that makes sense!

Yes, all of what you said makes sense. If I had a lb of coffee for every time I’ve seen a bean (green and roasted) lodged as it was in your photo…

I’ve often roasted smaller screen size beans too (South American “peaberrys” and some of my Ethiopians). I’ve seen them have physical problems processing normally with certain roasters I’ve owned. But, I haven’t (yet) seen anything odd with them in my Bullet with its solid drum design. But that front edge of the Bullet’s drum does leave some potential opportunity. I guess on the noise reduction, fingers crossed that it remains all good.

I guess on the noise reduction, fingers crossed that it remains all good.

I feel like I’m on thin ice and spring is arriving tomorrow! We’ll see.

Does anyone have a pointer to where I can locate this spring? After about 70 roasts, all of a sudden I have started losing beans out the bottom of the front of the machine. I can manually pull the drum “forward” before roasting to mitigate this, but eventually it migrates rearward again. Which makes me think that somehow this spring needs to be adjusted. It isn’t visible to me when I take off the chaff collector but thought I should know what I’m looking for before I disassemble.

I read and re-read your description and it sounds like you have a different issue than what I had. But in case it helps, here’s what I encountered…

I was having a problem with certain beans that were so small they were getting between the front edge of the drum and the from plate. In my case I could hear the scraping noise as the bean got jammed, then a couple times I got a bunch of greens spilling out the gap under the ejection door. To resolve it I removed just one of the spacers at the front of the drum. I didn’t hear any scraping when I started the roaster so I tried a roast (same small beans) and that seems to have resolved it. Small beans still get lodged in the space (horrible noise!), but so far they have either slipped out again or broken.

I’d suggest getting a trouble ticket started with Aillio. They may have encountered what you’re experiencing.

Thanks Bruce for the reply. I’ll contact Aillio as you suggest. I agree with you that I have a different issue than yours, but similar symptom (beans falling out the front edge). 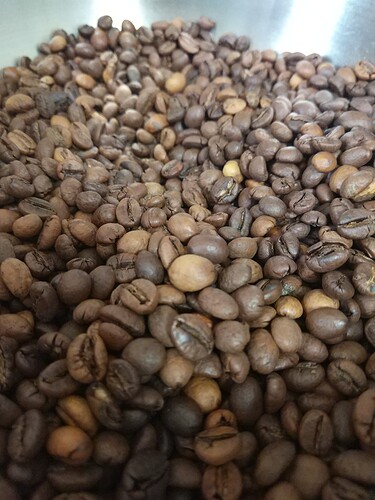 These beans are big old robusta that I was just doing some practice runs with.
Beans started pouring out front, not from the door, but the space under, lost about 20 beans and taking a look at the glass there seemed to be more beans than usual pushed up against (like a really packed train at rush hour). Then a loud grinding sound and then me panicking with the PRS and ending the roast.

Any conclusions as to what this was? A lodged bean somewhere somehow?

The door might not have closed completely. Also make sure the drum is pulled forward before each roast session.

The beans were escaping through the other opening under the door, but I’ll make it a habit to check the drum every time before roasting