Folks, I have something like over 400 roasts on my bullet r1. Have logged 100’s of graphs and know exactly how long it takes to get from preheat to TP to Yellowing etc… with the exact same batch size and beans.

Over the weekend I did the IBTS, upgraded my firmware and software, and ran 2 roasts.

The first roast, using the exact same power settings I have always used…almost died.
The heat just isn’t there! The second roast I had to compensate by starting at P9 as opposed to P7 and it improved, but still was slower getting to yellowing and FC than prior to these “upgrades”.

I can’t even begin to describe how disappointed and angry I am. I loved this machine and now it’s almost useless. I certainly can use it, but no one else on my staff can. I have no problem manually roasting and logging things, but one of the great advantages of this machine is I could help others by writing my recipes for batches that triggered off of time.

This new software is prioritizing the wrong thing. Roaster functionality should be first and foremost over some cloud based community that desires to data log everything I am doing.

Did you adjust your preheating temperature? I had the same experience until I read the manual and realized that you need to set a profoundly higher preheat temperature with the IBTS. I roast in F (sorry, but I’m too old to change) — but I had to set the preheat temperature to above 470 to get an indicated BT of 300 (which is my typical charge temp for SweetMaria’s Monkey Blend). This was over 100 degrees higher than my prior setting.

I am also finding my roaster isn’t behaving the same as before the IBTS. I’ve been experimenting with ever-increasing preheat temperatures (and also increased power levels during roasts), and have brought things back into the realm of comfort (first crack before 14 minutes), but just barely. I haven’t maxed things out yet, and am about to try another 750g roast, this time preheating to 280°C. We’ll see how it goes.

So, I finished that roast, and 280°C preheat helped a lot, but even with that preheat and P7 for the roast, it just barely got through 1C in 11 minutes. I used to have to cut power way back, and increase the fan speed to keep 1C from happening too soon. Here’s my profile from that roast. I don’t think I could roast 1kg adequately with the current setup, so I agree that things aren’t quite what I hope for in terms of eventual performance. I’m confident that they’ll continue to improve, though.

Agree that pre-heating has a substantial impact on the system, but I don’t think it is the only factor impacting the performance. I should mention that I did preheat to higher temp on my second batch.

I also noticed that the system assumed I was ready to charge within minutes of cooling down, which as another user pointed out is incorrect.

My rule of thumb for pre-heating is to wait approximately 20-30 minutes.

Yes, I see. I will try next roast with pre heat of 280 c, and pre heating at least 30 minutes.
It is just that we have to learn the new temp marks for this sensor.
I cannot believe the heating capacity of the bullet changed because of the new sensor and firmware.

What is the R2 upgrade?

I installed the IBST sensor over the weekend and did some roasts that turned out awful. I wasn’t preheating enough I think is the problem.

I would really encourage you to study the nuances in the IBTS updated manual. The Bullett is indicating that it’s ready to charge because of the target preheat temperature that you inputted. If you have a low target preheat, the machine will almost certaintly be hot enough at the conclusion of a roast to trigger the “charge” alert quickly. You need to understand that the Bean Temperature and Drum Temperature indicators function much differently with the IBTS installed — it might be useful to hop over to the Aillio page on Facebook and review some of the discussion in this regard. With the IBTS, the temperatures indicated by the two readouts are no longer directly comparable because the one driven by the IBTS is a virtually instaneous measurement and the other is a lagged thermoprobe. This delta necessitates a much greater preheat temperature SETTING — I emphasize SETTING because the temperature isn’t actually higher — it’s just accurate compared to lagged artificially (and incorrectly) lower number that we used before. Once you normalize starting charge energy, I strongly suspect the roaster will behave identically to your prior experience.

You are jumping to conclusions.
If you would actually read the manual or the quick guide which came with the installation guide, and start with our recommended values for pre-heating this would probably have saved you some grief.

Aillio Technology Co., Ltd www.aillio.com [email protected] IMPORTANT: After you have installed the IBTS, you will need to update your firmware before you can begin roasting. Please read our IBTS Introduction and QuickGuide, which also includes... 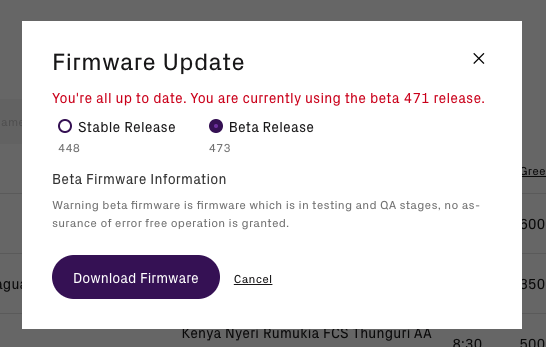 You are reading this because you are among the first in the world to roast with our Infrared Bean Temperature Sensor (IBTS). There are a…

We have emailed the IBTS installation guide to everyone who bought the IBTS.

The old sensor had pre-heating up to 205°C, and the IBTS is now 300°C, but with next firmware release it will be changed to max 310°C so if you are roasting 1Kg you will get some more momentum. There is a limit to how high the maximum pre-heating temps can be as it could start to overheat the induction coil under the drum, so we are taking a precautionary approach with the new sensor.

The heating (power) output is exactly the same as it has always been.

If, and I would say that this is probably the case for most people, your old IR glass was not very clean, then you would be pre-heating to a higher temperature than what is displayed, and this will give you the assumption that you have more power, as you have more energy in the system to start with.

Perhaps we should make it more clear that the IBTS includes a slight learning curve, but once you get it dialed back in, the advantages far outweighs the cons of the old sensor.

I have passed on your recommendations for the software to the guys working on that.

Thanks! I just botched three roasts before I realized I had forgotten to compensate. I was running on autopilot I guess, even though I read that I’d would need a different preheat, seems I forgot. The next night I used a higher preheat and roasted perfectly as you said.

I am traveling this week, but looking forward to readjusting the preheat temp as it sounds like others have had great success with this approach.

Ive had the funniest feeling my roaster wasn’t kick out the BTUs as it should. Ive had it a month and was surprised at having to go full P9 to get my beans to crack in under 12 minutes @ 600 g. That’s nearly half the rating. Like you say great roaster but…it’s only as good as the software allows.

Apologies if this is in the wrong thread, but I am unable to preheat greater than 205 even though I have beta firmware 448 and R2 running and connected.

Thoughts on how to troubleshoot?

You need to update to 475 to use the new sensor.

Thank you. That worked.
Would suggest an update to the documentation that is being provided.

“…After installing the software, you can access the firmware update via the Tools menu in RT2 as seen below, making sure to check the option to download the Beta Release”

At first I was preheating at 270 C, but my beans scorched (batch of 630 g). Could be the type of bean, but a few roasts later my preheat temperature was only as high as 230 C. A professional roaster advised me to decrease to P4 (or lower) after charging, and after one minute to increase to P9. It gave me a superb 14 minute roast. He also advised (about) 40 seconds before FC to lower to P5 (still a little bit to high). With the beanprobe I couldn’t exactly see what the temperature is 40 seconds before FC (that depends on the environment temperature and the amount of beans) , but with the IBTS I can ! So, for me, the IBTS is an improvement.