Need some help with decaf roasts

I just roasted some decaf for a friend. It had been years since I roasted any decaf and it was my first decaf on the Bullet. Yikes! What an embarrassment. Just charred little carbon shells. I had wanted a dark roast but this was way past that.

What I’ve read suggests I used way too much heat too early. Pre-Heat was 392F (what I use for non-decaf beans, 550 gm load) and IBTS temp when I dropped the beans (432F) was about what I would want for a City roast. But this was beyond a Vienna… very black and no sign of oil on the surface. Plus a little powdery black dust left behind in the drum. IBTS rose very fast after FC ended (hard to hear, but I had expected that).

And that was the third batch. The first 2 batches (IBTS of 441F on first batch, 437F on the second) were even worse. Frankly I’m surprised the beans didn’t ignite when I dropped them.

If anyone out there can offer some decaf-guidance I’d appreciate it. At the moment I’m only dangerous!

I almost exclusively roast decaf… I drop the beans in at 200c/392f and roast them all the way to 220c/428f and they a delicious Vienna to French. I do find the temp readings and evenness of the roast is better at 1kg batches.

Thanks for the quick response!

Sounds like I’m not too far off except for when I drop the roast. I looked at the profiles again and see that my 3rd roast went to 436F, not 432F. As fast as things happened at the end, it got away from me even faster than I thought. That caution about not letting it get away from you was repeated in several articles.

I imagine a 1 kg load helps slow things substantially at the start so I may have to slow the front of the profile even more to compensate.

I was roasting some Sweet Maria’s Donkey blend for espresso, but I’m out of that so I’ll try a Burundi sample I have.

Everything SM sells these days is Swiss Water Process which is pretty dark to begin with. Am I right you’re roasting SWP decaf? Btw, I just read that the E. Limu does really well getting thru decafination… and you just confirmed it! Who’s sourcing it for you?

That is correct- SWP from SM. Really excellent.

With the smaller batch sizes you might need to step down the heat (and fan?) as you get closer. But it sounds like it got way too hot anyway?

The first time I roasted SWP I was stunned at how the beans looked burnt. I threw out the first batch and tried again, same results. After I did some homework I learned that’s how they look because the color is washed out during the decaf process. If you’re dropping the beans right near the end of FC they are probably city or city+. I roast in Celsius so I can’t really relate to your temps per se. I think I charge much higher at 245c. Hope you get it worked out. Cheers.

Just got thru another roast… some Burundi Kivubo SWP that’s been sitting in the bin for maybe 2 years (hope that’s not too long). Seemed to go much better. Darker as you both have suggested (and much darker than I recall!). At least the roast doesn’t look like beads of carbon. I’ll give both this most recent and the previous batch a try in a couple days.

Thanks very much for providing some feedback.

Justin- Yes… way too hot. It got away from me at the end. IBTS essentially spiked at the end. It was better this time as I backed off further after FC.

Wayne- Preheat was 200°C, substantially below your pre-heat but what I’ve been using for a couple months for my non-decaffeinated greens. I remember the warnings about how dark the roasted SWP beans can be, but seeing it again didn’t look at all familiar! I’m actually glad I had to struggle with this… getting more out of it by having to start a profile from scratch.

Sounds like you’re getting a handle on this, but thought you’d be interested in this SM article on roasting decaf. I just bought some decaf to roast for a friend, which will be my first decaf in the Bullet, so interested in your progress.

Saw the link on SM on Friday but it was broken (led me to the Decaf beans). Yours works and I just scanned thru. Similar content to other essays but it has emphasis on caution during the drying stage. That caught my attention because I suspect I was too focused on the end of the roast. Oops!

So thanks for this… fills in a missing piece!

Just tried the Burundi Kivubo SWP. Just blah till it cooled, then bitter. I’m pretty sure the problem is me (from the reading I’ve done I have a few things to try), but I should ask if SWP beans die on the shelf… ?? What I just roasted is probably 2 years old (plus shelf time before I came along). I’ve roasted non-decaf greens that were older than these without noticeable loss in flavor (as long as they didn’t dry out).

Well I’ve gone thru at least one roast of each of the decaf beans I had and found I just couldn’t get anything drinkable. I received some new Ethiopian Sidamo water processed. In this case ‘water processed’ is not Swiss Water Process, but rather Royal Select Water Process (I believe Royal Select is a UK company… ??). Smelled great after the City roast but not so great in the cup. Still, I could drink it without gagging. I tried a few more samples and went to what I think might be called Full City which improved the flavor a little (-> 430°F IBTS; I tried roasts to 424°F thru 430°F IBTS). The roasted beans looked and smelled great, even had a little sheen as they cooled.

A couple other orders of decaf just arrived yesterday and I’ll try a few samples from those new beans shortly. At least 2 of the samples are S(wiss)WP which I did ok with in the past. I haven’t made the breakthrough I had hoped for, but I’ve concluded I can’t store decaf beans for very long, at least not in the casual way I’ve been storing them (in the plastic ziplock bag they arrived in, then kept in a tub in an unheated space waiting to be used).

A work in progress…

I roast SWP decaf regularly and really have found it quite hard to mess it up on the Bullet. I have the IR upgrade and generally roast based on its temperature reading, which based on its reading at first crack appears to be pretty accurate. Usually FC starts at 195+C and ends NLT 210C. It is hard to here FC with water processed beans and it is definitely not a robust sound. I typically drop prior to second crack. I’ve attached a recent profile. Beans are from El Salvador and 475 gms at start. Weight loss was 15% and at C++. No second crack. Flavor profile is towards cocoa and caramel, which may be different from what you like but is my go to taste. My beans are usually less than six month old. I once roasted old, dried out beans and the coffee was definitely undrinkable. Got them from a local coffee house that wasn’t too excited about home roasters I guess. Else, I only have used Sweet Maria product.
Happy roasting
Robert 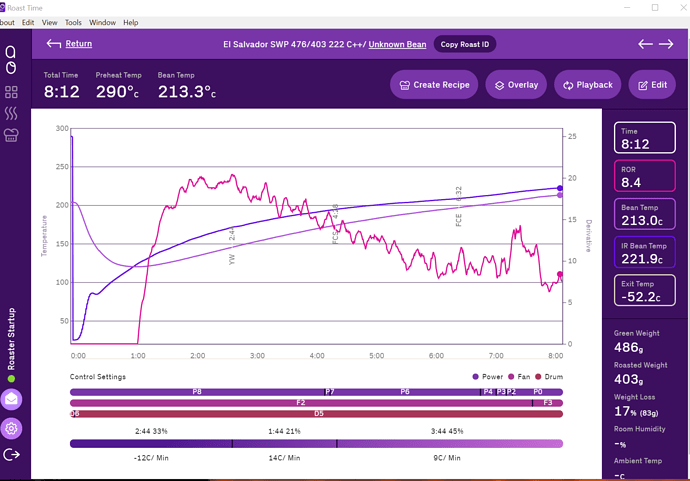 I’m pretty convinced at this point the beans I originally used were well past their expiration date! Handling as much as aging- there’s no environmental control in the shop with storage temps that get down to the low 40s (F) in the winter and above 90 in the summer.

Interestingly the beans decaffeinated with the ‘Royal Select Water Process’ were very dark before roasting, but the SWPed beans were only a little darker than unprocessed beans. And of course that extra darkness carried over into the roasted beans. I’ll read more as I go along but at this point I’m pretty convinced I’ll stick to SWP processing. Otherwise there are too many variables.

Thanks for the SM article, really helpful! Particuly good to know that because of the decaffeination process the beans are less dense and require less heat during charge/drying phase.

I doubt the difference was the decaf processing but more what I did to the beans.

Hi Bruce,
I just read this, have a look…

How Coffee is Decaffeinated

How Coffee is Decaffeinated Decaf coffee gets a bad reputiation, and for good reason.  Thanks to Sanka, most of the decaf coffee that has been sold over the years comes from dismally poor stock.  The original bean was poor quality and the...

Thanks for the link. I see they mention MWP which yields distinctly darker beans than SWP. My failed roast attempts included some. I feel guilty for ruining what should have been really good decaf!

I have had really good decaf from Peet’s & Starbucks (and probably one or two others) so I know it’s doable and that it starts with good beans properly decaffeinated. Maybe this article will break the code for me!

So thanks for this.

We’re currently in NM taking a break from the AZ heat… been too hot to roast for weeks. Hopefully we’ll get a weather change by the time we’re back and I can give it a try.

Hopefully we’ll get a weather change by the time we’re back and I can give it a try.

A great pleasure. I too am trying to get a decent decaf and have just bought some Colombian MWP beans, so will try them soon. I’ll report back on the forum if I manage to create a really good decaf.
Cheers,
Mark.