Need to Accurately Show Time of Events on Charts (IMPORTANT)

I LOVE my Bullet and the updated software, but I would like to point out a few problems that I hope you will quickly fix.

Specifically, I just realized that in the new software, the chart display does not allow you to accurately figure out the time of events, setting changes, etc. There are three reasons for this. One is that there are no grid lines that extend up from the time markers on the X axis. So when you see a dip or spike in the graph, you can only guess at the time of this event. 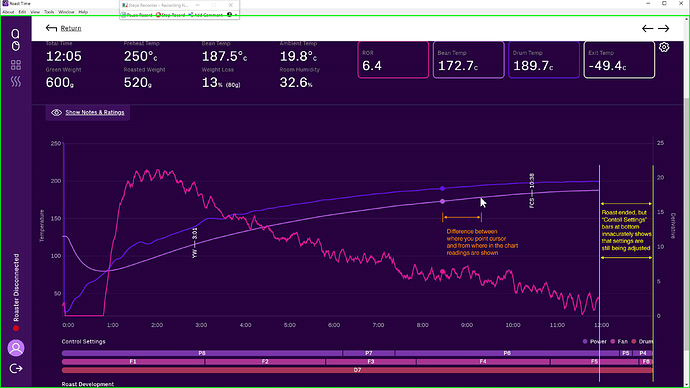 Additionally, it would be nice if the chart displayed the time of data it is reporting. For example, on the chart above, I have used the mouse pointer to select specific points on the chart. The boxes in the top right corner show that at these points the ROR was 6.4 and the Bean Temp. was 172.7 degrees. But it is impossible to accurately determine the time at which these readings were taken. There is a fourth box in the top-right corner for “Exit Temp” - and it is my understanding that virtually no one uses this reading since you need to install an extra sensor to measure exit temperature. Why not use this box to report the specific time of the data readings being reported in the other boxes? Makes more sense, and would be MUCH more useful to most roasters. 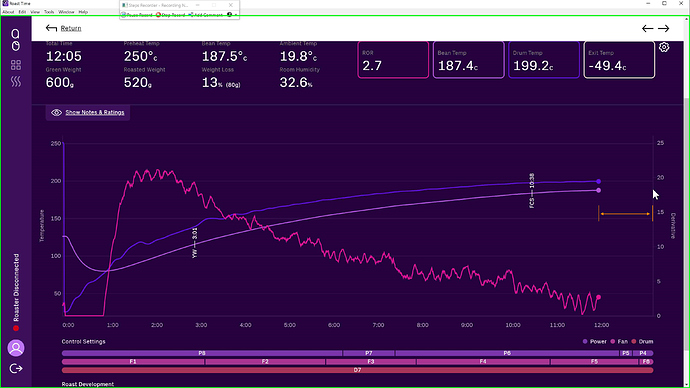 Again, I really love what you are doing with this software. I hope that you can fix these bugs soon.

Hi @SanDiegoMV thanks very much for your feedback and detailed explanation, much appreciated.

Concerning the control settings chart length this is currently being worked on and has been on the radar for a little while, technically it is more difficult then might be perceived - but it is underway. We are also pushing a new layout update for this page likely in the next 24 hours.

The difference between the cursor and the chart marker is a new one, doesn’t seem to be happening for me on a mac, I will follow this one up with further testing for you.

Thanks @SanDiegoMV, we’re excited for the coming weeks more improvements and features on the way.

why don’t you make the RT 1.1 again would be better! and with a mac version

I see the same issue on my Win 10 system. As I move the mouse pointer from the origin toward the right, the displacement between the mouse and the marked location on the graph grows wider and wider. Check the width at the far right on the chart from @SanDiegoMV and compare that to the spacing between the mouse pointer and the circle marked on the temp graphs. The spacing is different between the 2: the left-most misalignment is negligible compared to the misalignment to the far right. It also shows up when Events (Control Settings) are recorded, presumably because they’re being added at the far right of the screen. I haven’t tried to do a Playback, but it doesn’t look promising based on these graphics.