I have been using Artisan instead of Roasttime with my R1 with the hopes of using the IBTS ROR curve. Unfortunately the IBTS ROR is mostly unusable as there is random noise on the curve. This noise seems to coincide with fan on the induction board spinning at high speeds. Has anyone else noticed this?

I’m guessing eventually Roasttime will have the IBTS ROR so it might be something for the developers to look at if they haven’t already.

Yes, I’d like to see what you’re running into. 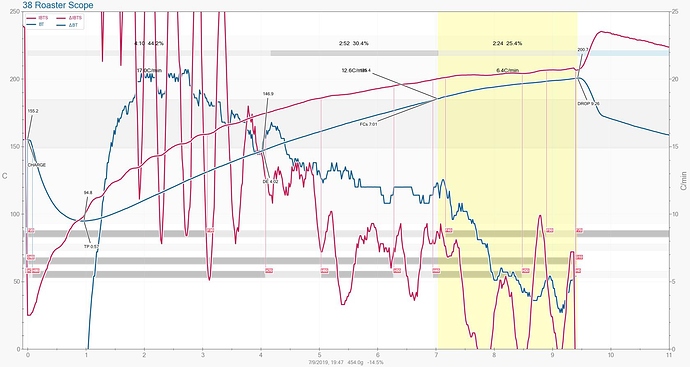 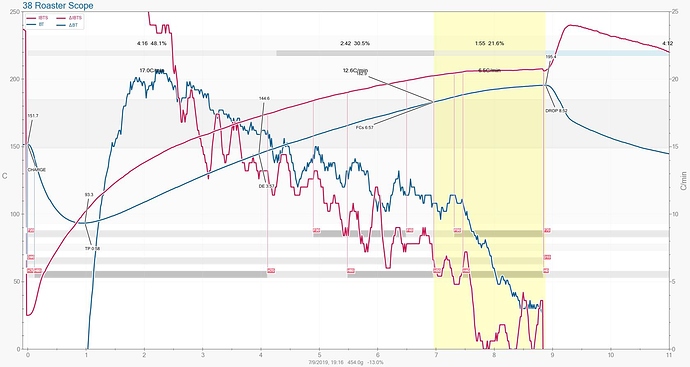 You can see oscillation at the beginning of one of the roast curves (red line). Same basic roast profile using the same exact beans… Sampling interval 1s with oversampling turned on. Delta span 10s for both ET and BT ROR.

I recall someone commenting that a sample interval of less than 3s was going to be way too noisy. You might try 3s and see what happens…

It’s obvious from these images why Aillio has been slow about giving us IRTS-based RoR. Looks like it’s not easy to do!

Is the first chart the first roast of the day? It looks like it has swings in IRTS (red) as it rises that are similar to a drum that’s not yet thermally stabilized. Those swings aren’t present in the 2nd chart and are the source of the off the scale swings in the 1st. And the huge swings in RoR make me think of a scaling issue, i.e. right-side scaling for RoR seems to be way more sensitive than the 0Cº-25Cº (0Fº-45Fº) it’s labeled.

While the major issue is probably setup, whatever is happening here is a lot more complex than can be solved by folks like me that aren’t using the same s/w. I can see myself going thru a lot of green beans just trying to get a readable chart!

Thanks for sharing this. It’s been 6 months since I’ve used Artisan (it was on a HotTop- v/1.2x?) and I was curious how it had changed. Like RoasTime it’s a work in progress.

@leftiesrule - I use Artisan on the Bullet and here are (2) screens from within the Curves settings that helped a lot. IBTS, for all of its marketed benefits IMO creates more problems than it solves at times. Having used high quality, fast thermocouples from Omega for years in Roasting, I feel that thermocouples are actually the better solution for BT measurement and data feed (at present).

I’ve focused my efforts of getting Artisan to look at BT (from the Thermocouple Probe) instead of what IBTS is sending. Here’s a couple of my screens that I’m using from within the “Curves” settings on Artisan.

Deselect the ROR ET box on the “ROR” tab which (alone) removes the off-the-screen graph of Delta ET.

On the “Filters” tab, click the box that swaps ET <-> BT to measure the BT from the Thermocouple on the Bullet. 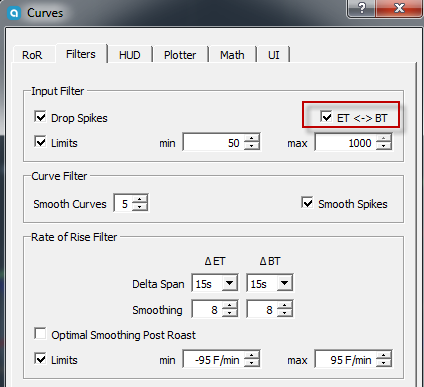 My Artisan curves are smooth, no spikes and most importantly I can use the software to properly measure ET, BT and ROR without a bunch of useless garbage getting into my graph.

I think when you set up Artisan, you also have an option to choose IBTS or not, I assume that sets up the configuration of the RoR source.

I think one of the touted advantages of the IBTS was in getting appropriate bean temperatures when you were not using the full 1KG capacity. If you are roasting say a 250g or so batch, the argument was that the old school bean probe wasn’t sufficiently in the bean mass to be able to get sensible data; the IBTS was supposed to rule that out.

At least you have a choice

@bab Surprisingly the 1st chart is from the second roast of the day. You’ll notice that the BT charge temp is a little higher than the 2nd chart which is pretty much when the Bullet started telling me to charge.

@PapasCup Thanks for sharing your settings! It’s great to see another IBTS Bullet owner using Artisan. Based off my experience thus far with the IBTS I’d tend to agree with your sentiment. The only benefit I’ve really seen is that yellow time and 1st crack are very consistent across charge sizes and different beans. I’ve also swapped the BT and ET

Out of curiosity what is your sampling interval and do you select oversampling?

I think the fact that the IBTS is higher than the probe is irrelevant as the IR sensor is looking “down” from my recollection when I upgraded mine (the angled sensor).

@leftiesrule - My Sampling Interval is 1.0s and yes I have “Oversampling” selected too.

@stuartmcknight - Ah yes, I also recall that IBTS is angled somewhat. However, simple, well-placed thermocouple solutions would have accomplished everything needed to roast on the Bullet. TC’s also don’t get affected by things (beans, optic cleaning, etc) that can thwart the performance of IBTS.

Given that I’m not doing “sample” roasts and that I’m using Artisan, I just haven’t found IBTS to be useful for anything other than ET. I think of IBTS as a “work in progress” that doesn’t (yet) replace what a good quality TC can do. Reliability and simplicity could be why so many well-known roaster manufacturers still use TCs today.

@PapasCup I think IBTS shows potential for some things and I’m glad Aillio decided to give it a go. They still provide the “standard” temp probe so I don’t see anybody losing out…

Like any new technology, IBTS certainly has potential. IR as a technology is far from new and I would expect that other (longer term) roaster manufacturers have considered it before Aillio. It just needs to deliver (IMO) better results than it currently provides (in hardware and software) to be an impressive step forward from TCs.

When Aillio decided to have a TC start measuring BT and then have IR take it over during the roast, it caused confusion in the way software (and Users) interpret what feed is managing BT. That has been true of both Aillio’s RoasTime and Artisan’s software on-screen interpretation of the feed. That is why I mention “simple” as a benefit of TCs, and from the perspective of BT data management. We can all learn to be “software artisans of roasting” whether BT is managed by IR or TC. It just needs to be something that we can easily select/manage/control for the data feed.

I’ve been getting noise and an inability to have the R1 charge to the requested 180C. It seems to like 145 or somewhere around there. Any suggestions? Is the issue the latest firmware? Can I back down to a more stable one? Also, note that the fan cycles to various speeds (somewhat rapidly) before it is even close to the preheat temp requested. I’ve been feeling that my machine is wacked since the last couple of firmware upgrades. I am an original V1, sensor and all. I should mention, the sensor had been cleaned prior to this run. 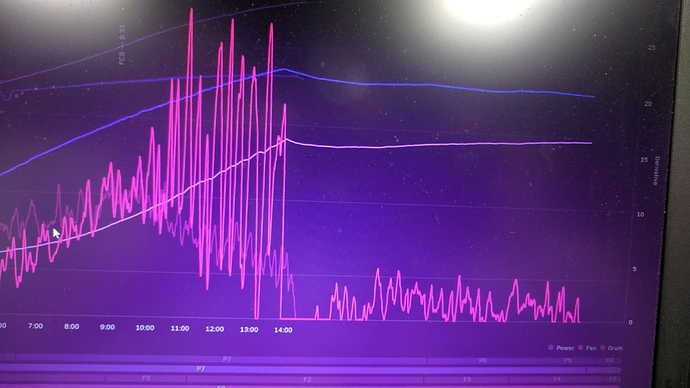 You don’t say what firmware you are running.

I’ve noticed a fan cycle during preheat but can’t confirm whether that’s on the induction board or the actual exhaust fan, it just worked so I paid no attention. You titled this IBTS noise but then mention you cleaned the sensor being original, the one that needed cleaning ? Which is it ? The original IR sensor is replaced by the IBTS leaving just the “original” bean probe.

Sorry for my inaccuracies and omissions. I am on Firmware 5.12. Yes, it is the induction fan that rapidly varies (different from the earlier firmware behavior. I do not have IBTS but do have an IR sensor, which has been cleaned. The noise is the garbage which has been showing up on the preheat graph. I appreciate your input and sorry about the lack of specificity.

Looks to me like the wild excursions that you’re seeing are on the RoR line on that graph (with corresponding ripples on the BT line). The drum temp (which, I think, is the IR sensor you’re talking about) seems smooth and calm.

I think you’ve got an issue with your BT probe.

Regardless, I think you’d get much better visibility on this issue by starting a new thread. This thread is specifically dealing with the IBTS, which is only in the V1.5, V2, and modified V1 roasters. Since yours is not among those, you’ve effectively camouflaged your problem from the Aillio folks, assuming any of them ever return to RoastWorld, again.