Now it's Chaff in the Drum

Love my Bullet but have had such a hard time recently. This morning was my first roast session after fixing the off-axis exhaust fan. It’s working great, but I’m seeing a ton of chaff in the drum and it’s collecting in the bean chute. Also: chaff shooting out the tester tube later in the rising period.

I’m not talking about the gravity exit, but the chaff actually staying in the drum and not much of it ending up in the back.

I took a video of the chaff shooting out the tester tube, but site won’t let me add it

Up your average fan speeds by one point.

Chaff still in tge chamber might mean not enough airflow to take it out.

Thanks so much. This sounds like an obvious thing, but would fan calibration help (I never did that. But it wasn’t an issue until recently.)

it wasn’t an issue until recently

Does this mean you have been using pretty much the same roast profile settings before and after fixing the off-axis squirrel cage (assuming same beans), and you didn’t have an issue with the chaff in the chamber prior to the fix?

This issue has been getting worse over the past few months (during the off-axis issue) but I was hoping that this would have resolved it. And yes, those other variables have been constant (my process, the beans)

You know, I think during my troubleshooting with the off-axis issue I may have calibrated the fans. Maybe I do just need to speed them up during the roasts. I’ll do that (but probably won’t be roasting again until next week)

Excuse me for asking: Are you sure that the fan is actually turning on?
Without any beans in the Bullet, you can start a roast and cycle forward past the preheat. You can turn the popwer down to 0 so that the induction heater doesn’t turn on and then turn the fan on to different settings and put your hand over the exhaust at the back of the bullet.

Judging by the photo and your description, it sounds like the fan is not turning or something is blocking the air flow to the fan.
You can also remove the chaff collector assembly and see if the fan is turning.

Another thing to consider is: did you disconnect the cable to the fan when you had it out? I am not sure if it is possible but could the cable have been put on backwards? It is a DC motor and reversing the cable will reverse the air flow. That might cause the chaff shooting out of the tester tube.

I was going to ask the same question as @billc Definitely start with turning the Bullet on and running it thru the cycles with the chaff collector off (and lowest PH and P settings). If the squirrel cage/exhaust fan turns freely then you know that is working. Next is to make sure the chaff filter is seated properly in the rubber thingy of the chaff collector as if not seated correctly it may interfere with the squirrel cage (see one of the other threads where @billc provide a wonderful schematic drawing).

Another thing that you can check is that there is no obstruction in the air duct that goes from the bean chute back to the Chaff collector. if it is plugged, that might cause the situation that you describe.

In the diagram below, I have put a red rectangle around the air duct that I am talking about. With the Chaff collector off, you can look down the air duct to see if there are any obstructions. 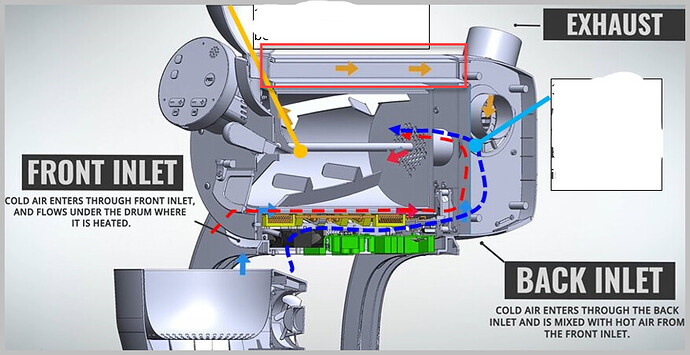 Another thing that you can check is that there is no obstruction in the air duct that goes from the bean chute back to the Chaff collector. if it is plugged, that might cause the situation that you describe.

I believe this is the most likely culprit. And that duct doesn’t have to be completely plugged- I had similar symptoms a couple years back and found a handful of beans that had collected in that duct. Slowed the airflow enough to leave chaff in the bean chute. At the time I suspected my issue was feeding the greens too fast but that is pretty much self-regulating by the geometry of the funnel & bean chute, so I must have gotten the funnel improperly seated once or twice.

Whatever, part of maintenance is to now sight thru the duct while the face plate is removed to be sure it’s clear.

Wow. Thanks everyone for all the thoughts and advice. I’ll try to answer in order:
@billc - The fan is definitely turning on; I removed the chaff housing and checked (but was also checking with my hand this morning). I’m thinking it’s air flow, too, and will describe below. I didn’t actually disconnect the cable to the fan when I tightened those screws the other day. Good to know, though!

@billc - I think you’re onto something with the airflow. One place I didn’t mention that chaff was collecting (after every roast lately) is under the drum. I vacuum it out between roasts but it’s very distracting and disturbing. When I clean the roaster (which I did last week) I run a brush down that long airflow tube. When I take the faceplate off next, I’ll visually inspect for beans.

While I was back there, I looked at the squirrel cage. Though I’ve been cleaning it, I think some of the hard roasts (when the fan was about to spin off its peg) got really hot and may have carbonized some of the chaff, restricting the airflow. Photos below. I went ahead and ordered a new one. I sprayed the cage with caffiza and let it sit for 15 minutes but it only got about half off. Photos below. 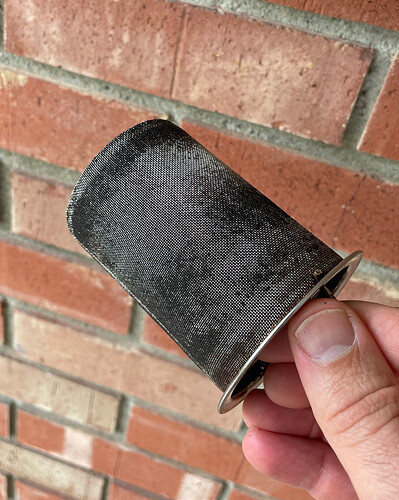 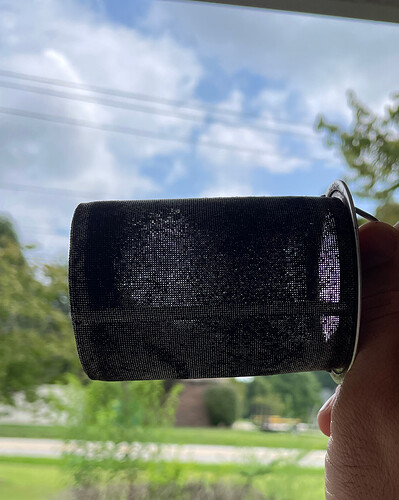 The chaff filter basket is made out of stainless steel.

You could hold the basket over a gas burner on your stove (or use a torch) and burn off the carbon on the basket.

Caffiza won’t bother the stainless steel, so you could make a solution of Cafiza and water and soak the basket for hours. (Don’t do that with the aluminum fan)
Don’t put the Cafiza solution in a glass measuring cup with painted on graduations. The graduations will be disolved by the Cafiza. (don’t ask me how I know…)

Oh my!! That filter!

You can also try full strength simple green, soak it and use something like a grout brush to brush then rinse. EDIT: maybe with some hot water (in which case it won’t be full strength).

That filter basket reminds me- especially with beans that have a fair amount of chaff be sure to vacuum the chaff collector between every 2 or 3 roasts. Maybe even after each roast if it’s particularly bad. I use the ‘trap door’ at the bottom of the collector to vacuum with my portable (or ??) vacuum. It isn’t as effective as the cleaning post-roast but it helps immensely. Sweet Maria’s as a YouTube vid about this from (I think) 2019.

Edit- As a reference point, that’s about how my filter basket looks after a roast session. As @billc said, Cafiza works well if you let it soak a little. I use something like a toothbrush to give it a boost. Wear rubber gloves!

Try soaking with cafiza (3gm/1Lt boiling water). You only need to leave it in for a couple of minutes. This will work with both the squirrel cage (impeller) and the chaff filter. DO NOT LET IT SOAK FOR TOO LONG. Dry thoroughly.

take the chaff collector off the back and shine a torch down the feeder tube. That will show you any obstructions if you look through the exhaust vent from the back.

You can always remove the feeder tube having taken off the faceplate to give it a good clean.

We just had a customer here in Bangkok who damaged his control board module because he had not cleaned the filter at all. If there is no airflow, some hot humid air gets into the control board and damages the connectors, switches and perhaps the IR sensor and fan…so keep it spotless and clean, and you will have better tasting coffee as well.

I believe @jacob is talking about the chaff filter- the cup-shaped screen filter in the chaff collector.

Thanks everyone for all the help. I’m embarrassed that it was probably the easiest maintenance issue. Have the squirrel cage a good scrub and will update when I roast tomorrow or Tuesday. The recently-calibrated fan could also be part of it, so I’ll go right into that if the cage clean didn’t do it. At least I have an extra on the way from Sweet Maria’s. 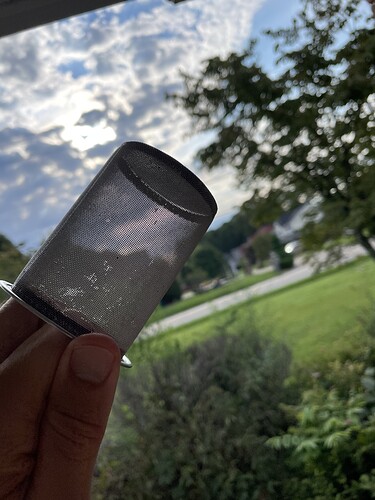