I have had the “IBTS connector not quite firmly seated, thus preheat limited to 205°C” problem in the past, and this seems somewhat related. Here’s what I saw just today, which now makes a second time:

When I turned on the Bullet, it took a long time with fans whirring but the display was black, and it beeped a lot, then finally the display came alive and said “the bullet is now ready”, but the IBTS fan wasn’t running, and the preheat was limited to 205. Since the machine had worked a few days earlier and has no jostling between roasts, I decided to power cycle, but got the same behavior (and no error logs in RoasTime). So I took off the front plate (power was still applied) and was fiddling with loosening the PCB screw on the lower left when I heard the IBTS fan start going. So I reassembled the front panel, and power cycled again. It let me set my preheat to 300°C, so I set my timer for 18 minutes, which is how long it normally takes to get to 300.

Here’s the weird part: after 15 minutes, I checked in on it, and RoasTime said the machine had been at 300 for about 5 minutes already, plus, the IBTS probe and Bean Temp probe were wildly divergent (more than I’m used to). I have tried to roast in this mode, and it’s clear that the preheat is nowhere near 300, and everything goes awry from there. So instead of proceeding to roast, I unplugged the bullet and immediately plugged it back in. The IBTs registered 200°C, which was much closer to what I believed to be the truth. I resumed my preheat to 300, and had a terrific roast.

Here is a screen shot of RoasTime during the bad - then continued good preheat. 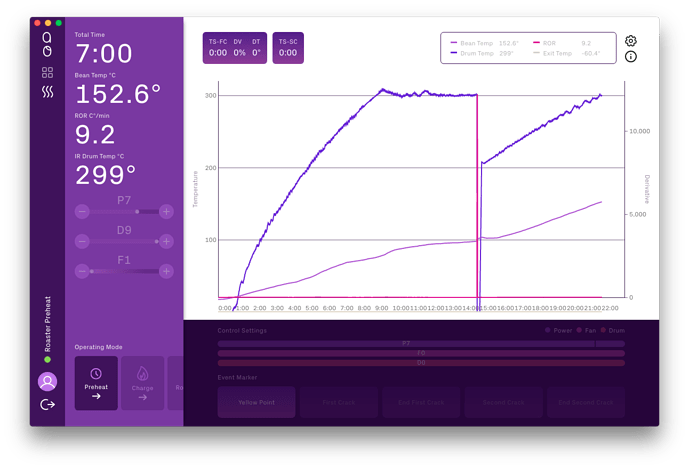 The subsequent roast was https://roast.world/my/roasts/DPIGEsh1VzY2AglISr0fb

Thank you for the detailed description.
I think there is a connection problem to your IBTS and this is creating two problems. 1) The fan wont startup. 2) The intermittent connection might not program the IBTS sensor correctly and this could cause the temperature to be wrong.
I would once again check that the small connector to the IBTS is correctly seated. This can sometimes come loose if you pull on the cable while attaching it to the control board. Restart the Bullet without the USB and after one or two times it should not beep at startup.

…
Restart the Bullet without the USB and after one or two times it should not beep at startup.

I wonder if I’m reading something into your reply that isn’t intended: am I correct that it can take more than 1 power OFF/ON cycle to complete a f/w update after the download? That would seem to be what I’ve experienced, i.e. at least 2 power cycles to get updated f/w to ‘initialize’. Things like Serial, Firmware & Roast aren’t always correct after a single power OFF/ON cycle, but now I wonder about other data or computed constants that I don’t see.

Also, I notice you are specific the USB is to be left disconnected for both those power cycles. I think I’ve seen similar effects for the USB connection but not consistently.

After upgrading (or fixing) your IBTS you will have to power cycle twice without USB. After a normal firmware update only once is required.

The serial, Firmware values not being displayed correctly is a RoasTime issues being looked into now.

Thank you… got it now. I appreciate you taking the time to detail the steps.

Btw, I’ve discovered the source of my supposed shift in IBTS output at Yellow/FC/SC. Apparently your f/w incorporated a change to the scaling of the IBTS output sometime after 2/26/2019 but before 3/31/2019 (no idea which f/w change that was). I didn’t immediately recognize there had been a change. It wasn’t till sometime in April I realized IBTS output was pretty close to theoretical event points. Then, since I lack the discipline to keep notes about what I was seeing, I managed to screw up the numbers by about 12°F: where I thought FC was about 3° less than theoretical it was actually about 15° less (the difference is less for Yellow and greater for SC). Here’s the really cool part: the February change in IBTS scaling is very apparent when using the Roast Analyzer tool you provide in Roast.World. On 11 roasts I’ve been doing for one specific coffee since January, the difference in IBTS slope is very apparent once I disabled RoR & Bean Temp. The shift in the IBTS was about +60F°-65F° at Yellow and a little more at FC & SC. I see it as a major improvement in the displayed value of IR emissions. 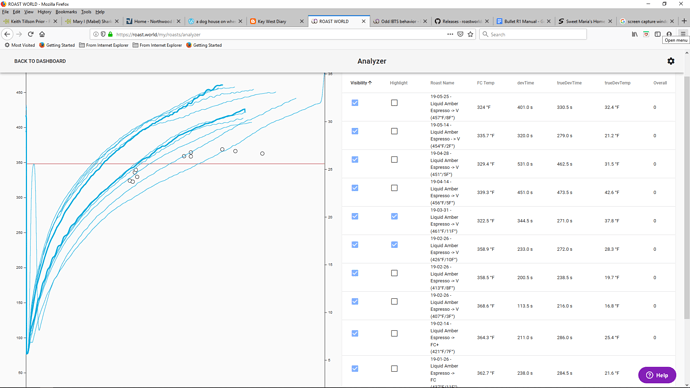