I roast on my balcony and would like to have a simple and portable smoke filtering solution. My idea: Filling an electric ash vacuum cleaner with active carbon filter material for extractor hoods. The vacuum cleaner itself already has a paper filter installed.
With a kind of funnel I would then suck the bullet’s smoke from a safe distance. Could that work?

I think of such a machine: https://www.kaercher.com/de/home-garden/multifunktionaler-sauger/asche-und-trockensauger/ad-2-16297110.html

I think I recall that others have done this so maybe a little time using search will pay off.

HotTop uses a similar approach which is built into the roaster. With beans that are particularly oily it can get overwhelmed, but then theirs is a very limited capacity system. What you suggest ought to do much better. I’ve seen similar vacuum-based products that are commercially available for smoke collection.

I suspect a significant concern would be power for that smoke collector. To be of any use to you it will need to move a lot of air and that means it will need a fair amount of electrical power. You’ll probably want to consider separate circuits (different circuit breakers) for the filter and for the roaster. Even the V2 Bullet will be sensitive to changes in power line voltage.

Of course, since I’m in the US, I have half the line voltage which means twice the current for the same amount of power. Our household circuits are near their single-circuit limit with the Bullet.

I 3d printed the exhaust adapter then used the semi rigid duct to make an inverted J shape over the roaster’s exhaust but I don’t think the adapter is absolutely necessary.

I’ve only done a couple roasts so far and haven’t done any without the filter but I will say on seasoning roasts the smoke is still very significant. The filter isn’t really meant to eliminate smoke more for odors in say a grow tent. That said, I roasted inside and used this setup to vent outside and had no issues with indoor air quality. On the one roast I’ve done just past first crack, the smoke seemed fairly negligible, but I haven’t compared it to having the filter off yet.

Please excuse my late thanks for your answers.

@bab I think voltage is not an issue for me. I’ve read about it many times. I don’t know anything about electricity. We have 220V and I’ve never had problems with any devices.

@bujordan Thanks for your detailed answer. That will certainly help. My neighbor complained about the unpleasant smell again. I roast on my balcony. Only small 250g batches. I really need a solution that takes up very little space and reduces odor. And yes, the vacuum cleaner would be too loud. I did not think about that.
Do you already have further experience of how much the filter reduces the odor?

Stefan,I sympathize with your problem. Have you considered a water-based solution? The Bellwether roaster uses a recycling water spray to eliminate smoke. The exhaust vapor from the roaster is passed through a spray, and the particulates are precipitated out by the mist.

Adapted from a liquid-cooled CPU setup, a 6-inch PVC pipe is used as the cooling tower. At the bottom is a Y pipe adapter, where the exhaust would be fed. At the top is a garden sprayer/mister, fed by a sump pump. The sump pump recycles the water between the bottom of the Y pipe, and the spray head.

I myself live in an apartment, and time my roasts with the local wind velocity. The most frequent wind direction takes the smoke away and down the street. However, if I do frequent roasts, I will build something to deal with the smoke.

That sounds like an interesting science project - is there a link to pages with more detail ?

This is the base of my idea for smoke control, from CPU cooling from long ago.

You won’t really know till you try. Looking forward to hearing about how it goes.

I was in a Las Vegas casino many years ago that was trying to minimize the smoke. They are all typically loaded with smoke, but the one I recall used a water mist to try to minimize the smoke. It was disappointing at best to breathe that water mist laden with smoke particles… it was like concentrated smoke. The mist drifted down onto clothes, the carpet, and the machines & tables as well. My take away from the casino was that the mist was collecting the smoke ok, but they didn’t put any effort into gathering up that water mist that’s loaded with the smoke particles (strip the water particulates). It sounds like your planned system is supposed to do that.

Hi Brian, the idea is great, but I don’t think I can build such a device. If someone manages that and reveals the idea, then I’ll be happy to copy the approach

I posted a seperate thread but would want to ask you guys here. Have you guys had any issues roasting outdoors on the balcony? I’ve been doing this with my Quest M3 and wondering how it would affect the Bullet. I don’t think that much compared to say a gas roaster whose burner flame can be altered severely by wind.

I switched from the hottop and only had a handful of roasts. The varying ambient temperatures (airflow conditions) over the year must be taken into account (Germany). Could that be different on a gas roaster? But I’ve already had good results with the hottop. To be honest, I’m not worried about that. Sure, I don’t hope for too much cooling at low temperatures, as the profiles always have to be adjusted. I record the ambient temperature of each roast and get to know the Bullet better and better. Since I don’t have any consistency requirements, this will be fine.

Not sure if you ever tried to build a smoke filter, but I do not think simply using mist will provide significant filtration. If you do try this you will probably want to add a random packed bed between the exhaust and mist to create a wet scrubber. I have considered trying to make one of these if I get any complaints from neighbors, but so far haven’t run into any issues. 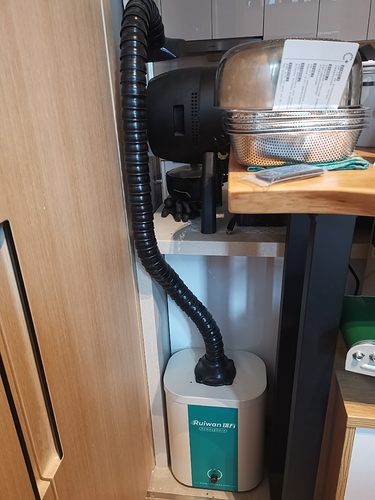 Very interesting system! Thanks for sharing.

Can you tell us anything about the filter? is it cleanable? contain a throw-away element? source for the filter?

Looks to be a welding fume extractor which is an ingenious idea actually, since they usually incorporate a 3 - 5 stage filtration with one stage being a HEPA filter. If anyone has angry neighbors (like me) when you vent the fumes to ambient, this may solve your problems!

… If anyone has angry neighbors (like me) when you vent the fumes to ambient, this may solve your problems!

The worst I’ve gotten was ‘smells like burnt toast.’ So far no complaint filed with our board, but… ??

wind, humdity etc. will play a part. For example if the wind is in the wrong direction it can stall the airflow through the roaster and you will have wisps of smoke coming out of the charge port, the bottom front etc. Or you might get exhaust condensation dripping from the bottom of the chaff collector or again the front of the roaster. In strong winds your roast can be all over the place but that’s part of the adventure.

Hi - just an update for anyone that’s interested and is tweaking their extract setup. I’ve fine-tuned my filtration / extract system to have two stages. The first is the AC Infinity filter box with a MERV13 filter. The second stage has a carbon drum filter on the end of the exhaust pipe. I’ve found that this setup reduces smoke / odor by about 95%. There is now only a VERY slight amount of smoke that’s vented out to ambient air. I’m 15 roasts in with this new setup and so far, neither filter is showing any signs of being clogged / requiring replacement. If anyone is dealing with less than accommodating neighbors, this sort of setup may be something to entertain! Cheers.