Power misaligned by time in graphs

Hello, I am using RT 2.5.5 stable, and noticed that the change in power is not correctly reflected for the time it occurs. As an example, attached - I switched to P5 at exactly the Yellow Point, but clearly this change shows well before. 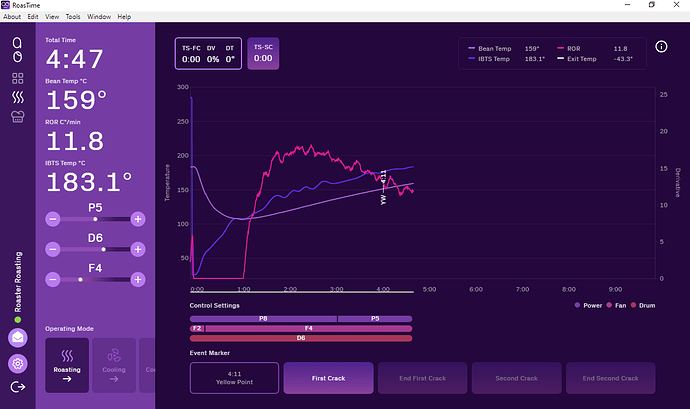 Wow! That alignment is much worse than on my Win 10 laptop… maybe 35-40 sec? I’ve been grumbling to myself about 3-5 sec. I’m using the same 2.5.5-stable s/w. What OS are you using? Btw, I’ve seen alignment degrade if you use an Overlay, then drop the Overlay and restore it (doesn’t look like you were using one).

Windows 10 laptop as well. And hm, I was indeed using an Overlay. I will try without one, but that was the reason I used it - to try and track the changes vs. time. So this must be an X scale bug in RT. I took Scott Rao’s class, and working to keep a steady declining RoR, so timining is critical to achieving that.

Yes, an X-axis issue. I haven’t noticed any scaling issues on the Y-axis.

When I use the Overlay feature, I go to the Roast History page when the roaster is ready to Charge, choose the chart to use, launch it as an Overlay, then go to the Current Roast screen. I stay on the Current Roast till the roast is done. RT seems to be happier when I do it in that order.

I also make sure I don’t drop/restore the Overlay during the roast- I’ve seen the X-axis change its reference if I do (as happened in the chart you posted). Also, there’s probably an issue with pixel pitch (the mouse and location marker become more and more misaligned as you move the mouse to the right), but I just ignore it and keep on roasting!

Following an Overlay is less frustrating if I get Bean Temp (thermocouple data) of the roasting chart to the same starting temp as the chart that’s overlayed. That can be particularly hard for the first roast as the roaster internal mass hasn’t really stabilized. Even waiting a good long time doesn’t always get it there if the Overlay was done as a back-to-back roast. The Bullet uses IBTS to decide Preheat value (that may require frequent maintenance if yours gets dirty as mine does), and it looks for Bean Temp to be a certain minimum value (255°F?) without much drift, but the starting Bean Temp can be much higher than that after 1 or more back-to-back roasts. I admit that I make it harder on myself by using lower Preheat temps than most seem to do.

In the next few weeks there will be a new version with this fix included. These 2 graphs are actually not connected in any way, so the x-axis calculation was happening as a “close estimation”. I ended up updating a lot of code to get this to work better. I will update you here on it’s release, but its still a few weeks out.

Sorry for the issue!

Thanks for the update Matthew.

Wrote too soon, no still the same issue in the latest beta

RT 3 is useable and being tested heavily right now. Unfortunately, the new RW is interconnected with it, so we have been in limbo waiting for that to get done. I am working on a script to make it backwards compatible with the current RW version - so hoping to have something for you guys soonish.

Appreicate everyones patience, we have some cool new stuff coming.