Is it possible to do the preheat on the Bean Temp Probe and not IBTS? I find the IBTS stats static but the BT keeps rising?

During preheat, the IBTS initially overshoots the preheat setting by 5C, then falls back and eventually stabilizes. The BT does the same, but with a time lag. For a 220C preheat setting, here is what I observed for BT:

Like you mention, there is a small BT RoR of 2.4, so one might think that given enough time BT and IBTS would eventually equilibrate. But I don’t think they ever become equal.

After this first roast dropped at 218C, I started back-to-back for a second roast with the same 220C preheat. Here is what happened:

Based on this I would have needed to preheat for roughly another 10 minutes to reach the same BT as in the second back-to-back roast.

My initial preheat to 230C generally takes 24+ minutes. Since I roast indoors at generally the same ambient temp, if I get “charge” any sooner than 22 minutes (happens only occasionally), I’ll cycle the PRS button to get more preheat time. I haven’t tracked the exact relationship of BT to IBTS but noticed the lag you mentioned.

On back-to-back roasts, the preheat depends on how long of a delay before I start my second roast while handling the first roast but usually is 8 to 10 minutes.

I have discovered that I can trigger an error during PH if I do back to back (to back) roasts because the BT rises too high. It freaked me out until I figured out what was going on. Once it hits 247 C (or so) it rightly thinks the bean temperature is way too hot. (It would probably be flame on if there were actually beans in there.)

There’s no mechanical connection between the Bean Temp probe and the drum. The only way the BT probe can sense the temperature changes is thru radiation and convection from the drum surface to the front plate where the BT probe is mounted.

In the Bullet, relying on BT for measuring preheat temp isn’t a promising method since there’s no contact between the BT probe and the drum. All that the BT probe can tell us is the sum of temperature of the air around the probe and whatever is conducted into the probe sheath from the front plate. Hence the long slow creep up (initial preheat) or down (preheating for back-to-back roasts).

@bab, @bradm Hi Bruce, Brad, apologies for the strange question: So do you use the IBTS or the BT probe to guide your roast profile adjustments? If we agree that the IBTS is a more accurate measurement of bean temperature, then what is the BT used for?

what is the BT used for?

It’s complicated. Which is to say I don’t have an answer and wish I did. Maybe Brad has something that will shed some light… ??

I like the BT data for comparison with other roasters. A lot of information and best practices have been developed for probe-based roasting. Even if some is arguably heuristic it is still useful to study. Unfortunately my BT data doesn’t seem to compare directly with that from small gas roasters with finely tuned probe-based systems, maybe due to differences in the probe itself or how it is mounted in the bullet’s inner faceplate. Their data falls somewhere between my BT and IBTS curves, with FC at around 185C for example. I wonder if there are any alternative probes that could be installed in our machines…

That said, I use IBTS exclusively for comparing Overlay roasts and making fine tuning profile adjustments.

During preheating, I think the air temp and drum temp are much closer to each other in a gas roaster than a Bullet. So the Bullet’s BT probe will be colder.

When preheating my second and third roasts, the BT shows much higher than first preheat; the IBTS shows same.

@bab, @bradm, @damon thanks all for your quick replies: we’re on the same page! So the Bullet manual gives us a starter profile for a 350g light roast. Bean type not specific. Start with preheat at 220C (IBTS presumably) and then Power and Fan adjustments according the IBTS, which we agree is parallel though hotter to the BT probe temps.
I’ve bought the Rao CRBP book and followed his Facebook course (of the book) so there’s a lot more that has become clear to me. I then made some roasts of 350g batches following Rao’s suggestion to “always use the BT probe” vs Brad’s profiles following a cooler roast - I got much more control from Brads roasts following the IBTS. Both styles got me to the end temperature I wanted.
I’d like to suggest the IBTS is measuring hotter Because its measuring the hot air in the drum (ET) on top of the bean mass surface temperature; we see this as IBTS following the BT probe in parallel. In comparison the ET probe in gas roasters is much flatter looking as it’s measuring only the temperature flowing through the drum without bean mass ‘interruption’ so the BT probe describes actual bean mass temperature…
That all said, I support Aillio’s roast style following IBTS with heat with Power/Fan control, I like Brad and Bab roast styles and can also see why Rao suggests we start with high drum temp following the BT probe, which i think would be easier on large batch sizes (+600g) since the IBTS and BT probe curves gap reduces so their temperatures are more similar. For sample batches less than 500g, the two sensors are approx 20-30C apart meaning we’re actually roasting much cooler.
Do we agree that Aillio roasting by IBTS would give us exceptional flavour quality?
Is declining ROR the right method for Aillio bullet? Anyone got results from another method?
Summary: BT probe is bean mass only. IBTS is bean mass plus drum environment.
What about we all do an experiment: choose a favourite bean we have most experience on. 350g batch. Roast it following IBTS for control points (as Aillio would have us do it) and then roast it by the BT probe per Rao’s method…
OR is Aillio presuming in their method that both IBTS and BT curves would behave the same for a 350g batch as would for an 800g batch? Needs an editorial maybe

@bab hi Bruce, yes I can see how that would be. The BT probe is in the bean mass and as such can sense the drum speed adjustment.
If we consider the IBTS to be bean mass surface temp plus drum environment temperature, it doesn’t sense drum speed changes as much as the BT would.

I don’t think IBTS can sense air temperature at all. It’s looking at IR glow from the warm surfaces, but the air itself is invisible to the probe, like it is to our eyes.

When preheating my second and third roasts, the BT shows much higher than first preheat; the IBTS shows same.

Exactly. I suspect it happens because the front plate (where the probe is mounted) has been heated by the just-finished roast. If you wait long enough the probe readings will drop down close to where they were after the initial pre-heat.

So the IR can not sense the air temperature and I guess during the preheating the IBTS is actually sensing the bottom spot of the drum where the heat is generated from rather than the air inside the drum.

Another question is, once the bean got heated and the smokes are everywhere inside the drum, will the IR sensing the bean + the air (smokes) ?

Another question is, once the bean got heated and the smokes are everywhere inside the drum, will the IR sensing the bean + the air (smokes) ?

Also the drum has 2 fans working to clear the particulates:

I just replaced the exhaust fan motor and can tell you first hand when that motor is running below spec there’s a lot of particulate matter left behind as well as chaff collecting in really unlikely places (like the bean chute!). I was seeing smoke drift out of the door when I dumped the roast which I’d not noticed before as it normally got pulled out thru the chaff collector via the transfer tube.

Thanks Bruce. I guess, in a way, the particle’s emissivity is too low for IR to sense its thermal radiation. So the IBTS is reflecting Bean’s temperature. In that case, why are we seeing different temperature readings between IBTS and the thermal probe. Isn’t that they both measuring the beans?

BTW, I happened to have the same problem with the smoke drift out of the front during the roasting later to find out it was the chaff filter got too much of the particles and block the air from moving out of the drum.

BTW, I happened to have the same problem with the smoke drift out of the front during the roasting later to find out it was the chaff filter got too much of the particles and block the air from moving out of the drum.

A clogged filter was what I had suspected as well. In this case the chaff filter was clear- nearly no chaff in the collector body and very little on the filter screen. But the bean chute had a bunch of chaff as did the transfer tube. The data recorded on the Aillio servers said the exhaust fan speed was staying in the range of 600-800 rpm thru F11. So even though the motor sounded like it was spinning very fast it was in fact much slower than it needed to be. @bradm helped me see the problem by confirming the speed of my exhaust fan vs. 3 other roaster fans… it made it very clear what the problem was: 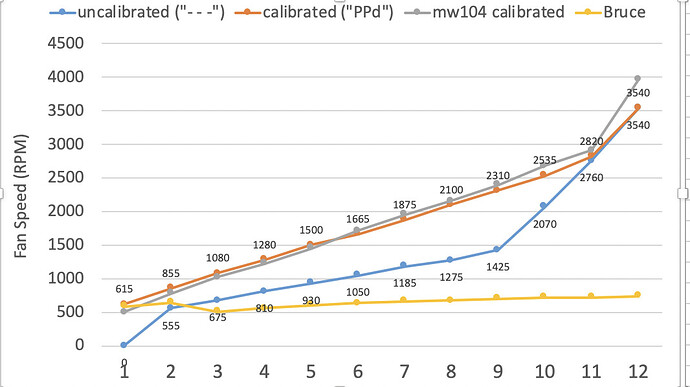 The new motor calibration says it’s spinning fast but it’s so quiet I feel like the data has to be wrong. I’m not going to get over that till I roast some beans and see how it goes.

Btw I had a post sometime back that mentioned I found a bunch of beans in the bean chute and the transfer tube. In hind sight I have to believe that was a symptom of the exhaust fan motor failing.

In hindsight I’m beginning to suspect I may have caused this problem.

I recall exploring the settings in the f/w setup including exhaust fan calibration settings and not knowing what I was looking at (at that point I didn’t know there was a V1 and V2 fan motor). That was a few months ago and there’s a chance I may have inadvertently chosen bL-26 calibration vs. bL-16 I was supposed to use for the old (V1) fan. It’s only wild speculation but I think the two motors may have different data scaling to compute the equivalent fan speed… like a difference of 6-to-1 or 5-to1. When rotating the motor shaft of each motor before installing I could feel the number of poles in each of these DC motors was significantly different.

This is way beyond what I know but it seems possible the issue was all of my own making. If you see this @jacob I’d appreciate some insight into how this part of the system works for displaying fan speed.