Profile recommendation: Can you suggest roast profiles for slightly darker roasts that touch into second crack?

Is there an “expert” on slightly darker roasts in terms of roast profiles to copy/learn from? I’ve been seeing a number of posts telling people to look at “bradm” roasts. So I have already grabbed a couple of those and have used them as overlay guides. Good stuff for sure! I used one of his to produce a pretty fantastic Kenya roast that my wife is using in her Technivorm the last few days. It is really nice.

In my 20 years of home roasting, I (and my wife) have always liked roasts that touch into second crack. My understanding is that these types of roasts are considered “crowd pleasing” roasts. I hate to be categorized as part of a crowd, but I do like to be pleased. So … I dunno. I guess I have simple tastes. (To be sure, I am thinking that I will probably be refining my tastes after a few “failed” roasts on that Bullet that were a bit lighter but … really quite yummy. Just need to work myself into it.) Also worth noting maybe that I almost exclusively drink straight shots of espresso. The light/lively/bright roasts have never made me super happy.

That being said, is there a recommendation for some curves/profiles that would serve as good overlays for someone like me who likes to, perhaps, slightly over-roast? The last couple of roasts I did following different bradm profiles as overlays came out the way I like. But it meant that I just let them run a bit flat (in terms of RoR) toward the end to get to the point of second crack. I suspect that is not the ideal method.

Belated welcome! Our backgrounds are nearly identical in terms of roasting machines. My Gene still works too… But I drink brewed coffee, mostly from the Technivorm, so can’t help WRT espresso.

I also roasted to the first snaps of second crack on the Gene. But the bullet seems to produce a similarly “dark” flavor (with much improved sweetness) at a lower drop temperature, so I drop a generic Gene-type roast at around 218C.

For darker roasts, lately I’ve been experimenting with the S-curve method suggested by a few others here: follow a Rao-ish decreasing RoR until about 212C or 90 seconds after FC, then allow the RoR to rise again. This shortens the development time to SC, reduces weight loss, and seems to produce a smoother, less bitter dark roast. Not sure if the same would hold for espresso. If you give this technique a try please let us know what you think.

Thank you for the tips and information. I have also been harboring a suspicion that the Bullet roasts taste a bit darker tasting than what my intuition would tell me from my Gene experience. I’m so few roasts in, though, that I can’t draw any firm conclusions. I will be doing a couple of roasts today.

Bruce also responded to this thread and gave me some ideas. This forum must have a “private response” option or something that I don’t see immediately because his response and my reply to him seem to not exist under this topic. Or I might not yet have figured out the threading yet.

In any case, I will research a bit more using your and Bruce’s information and go do some roasting!

This forum must have a “private response” option or something

Yes… Private Messaging. Click the icon for @tetrachord (the piano) upper right. You’ll see an envelope. Click that icon and you’ll be in the message system. Also keeps track of replies to your posts and Likes. When there’s a message or a reply you’ll see a circled number attached to your icon.

Did you find an optimal time range from FC to SC?
I found it difficult to reach SC under 4 or 5 min. Ideally I would like to reach SC in 3 or 3min30s

You could take a look at this dark roast of a Mexican Chiapas that went until the first snaps of SC:

That roast used a low and slow approach to FC which you could speed up if you like. The idea was to use a fairly smoothly decreasing RoR until about a minute after FC starts, then slowly increase RoR to shorten time to SC. Something like the Wilson S-curve method? The brewed coffee came out good, very drinkable, but a little uninteresting with not much complexity.

Not sure how large your batch sizes are but that roast got to SC easily in about 3:40, and could have been accelerated further by eliminating one or two of the last power cuts. I used extra fan at the end to vent smoke, but you could stick with F3 and accelerate the roast even more if you prefer those smoky flavors.

I haven’t experimented much with time to SC, but sure would appreciate hearing your thoughts if you do some testing. Curious to learn how you find time to SC correlates to flavor.

I’ve roasted to SC about 8 times and only recently I’ve really wanted to shorten the time from FC to SC (I call it SCtime) because I feel like I am baking the coffee when SCtime is too long (approximately 5 min) and the ROR is flat.
Like many of us who value Scott Rao’s suggestion of declining ROR, I tried to have that declining ROR all the way to SC but could never achieve it.
I’ve been listening to some podcasts from Giesen’s Willem Boot on Youtube, and although he says that using the S-curve to shorten SCtime is okay, he feels that the taste is not the best compared to a declining ROR to SC.
It seems I’ve had a little bit of success when I charge lower and use a higher power input from the start, that way I won’t blow through the first two phases too quickly and still have a relatively high momentum going into post FC. I’ve yet to taste it but I will post back here after I’ve had cupping as well as pull some shots of espresso.
I’ll include the last 4 roasts here to illustrate what adjustment I made, the last two roasts seems to make the most difference in cutting down SCtime. Roast #3 I literally left the roast running at P5 until drop haha! It had a increasing ROR towards the end like S-curve although not the same method you mentioned. Roast #4 is the one where I charged much lower and used a higher power input from the start which shorten the SCtime but didn’t seem to have declining ROR. 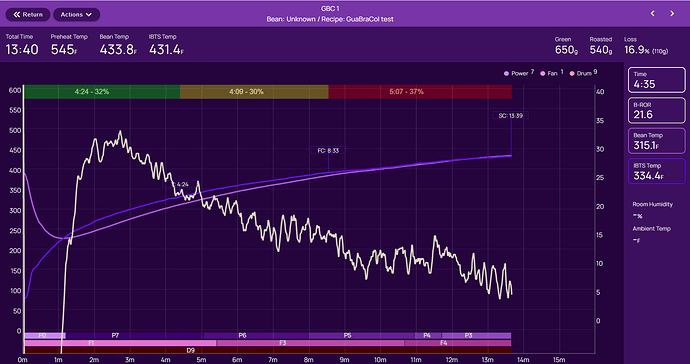 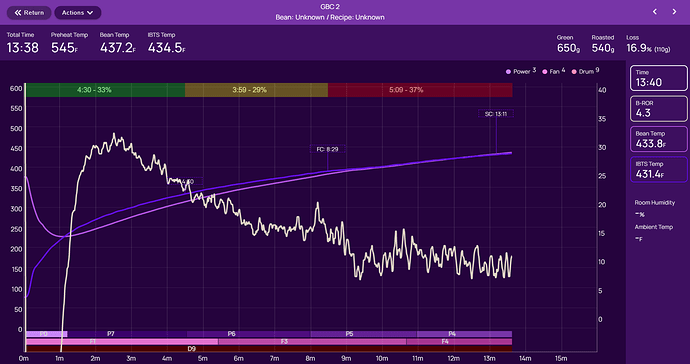 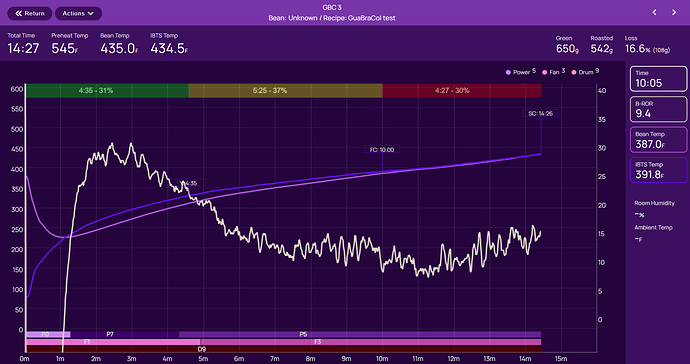 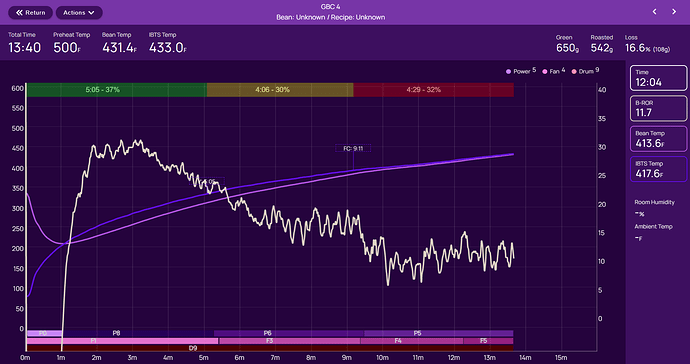