Relax, Don’t Worry, Have a Homebrew by Charlie Papazian

I have a teeeeeeny tiiiiiiiiny roasting businesss and typically, I roast on Sunday. However, I had a client who needed a roast done earlier than my specified cut off time. No biggie. So I’m trying to be cute and just replay the most recent roast that I had for the bean.

The most recent roast was for 450g. I just dropped 900g. Who has two thumbs and doesn’t notice anything unusual? This guy.

I was shocked how little it actually mattered. 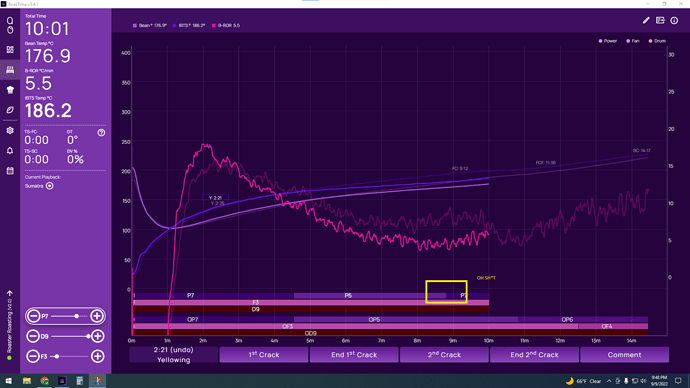 Despite being double the weight, There is basically zero difference in the overlay until the first temp drop. I was pretty shocked. Do I need a 300C preheat and p9 for a 900g batch? This (singular) data point says…maybe not,

I guess the point I’m making it you don’t need to live and die by the technique.

Relax. Don’t worry. Have a coffee.

Just being curious, but setting aside the curves, did your milestones match? Going by personal experience, your FC should have happened a minute or two later with the bigger batch size than the smaller one. Going with a higher PH would give similar timing for the milestones like FC and SC, IMHO.

They didn’t. But I wasn’t terribly worried considering I was taking it to a rolling second.

How did it cup though?

Turned out great. Told the customer about the goof ahead of time and they were still quite happy.

Between Morton and Hoos, there’s quite a bit of wiggle room.

As long as they are happy it’s all that matters!

Between Morton and Hoos, there’s quite a bit of wiggle room

I am sorry, but the names make me think of Dr. Seuss:

…did someone other than me just use a gif?! See @blacklabs I’m not the only finely cultured individual around here.