I would like the ability to place several markers on the graph as targets to manage to during the roast. Not sure how many are needed, but it would be nice to be able to specify time, temp, color for the marker and a label for the following:

@mcaillio I saw that in RT Settings last week when I roasted with 3.1.6 but the values can’t be edited? I wasn’t able to edit so I didn’t enable it.

Oh, they are editable. Hmm… could you try and save it first and then go back to the config and see if you can edit it?

Its editable for me. But this is not exactly what I was looking for.

I was looking for a static reference point plotted on the graph during a roast using a Temp and time as a target, so during the roast, if the predict line starts to deviate from the static target point, I can make adjustments.

The “predict” as is would still represent a moving target and would take some interpretation to make an adjustment.

Hi Eric, I was one of the people asking Matthew to implement the phases and prediction to save my brain from burning out trying to calculate on the fly.

At the moment, I look to where the prediction is crossing the phase change and drop down to look at the time. If it’s too fast/early I can slow the roast a little, if too late/slow, I can try and bring it along to get to my goal. The prediction line does swing around, and I think that’s just par for the course - you have to build in some midpoint latency in your estimation. Estimation being the operative word.

Can you mock up a screen shot of what you’re asking for ? Maybe that will make more obvious what might be possible ?

I’ll mock up a screenshot this weekend.

I simply want a dot plotted at the temp and time for the milestones such as DE, 1C and roast end. That way i can see where the IBTS projection is headed relative to my targets and make adjustments as needed.

Here is a poor mockup, but the dots represent targets for DE and 1C…

I tried using the phases as is, but the shading on the graph provides phases, but I still need to look for the time. The prediction line relative to a dot/point on the screen makes it easier to interpret… 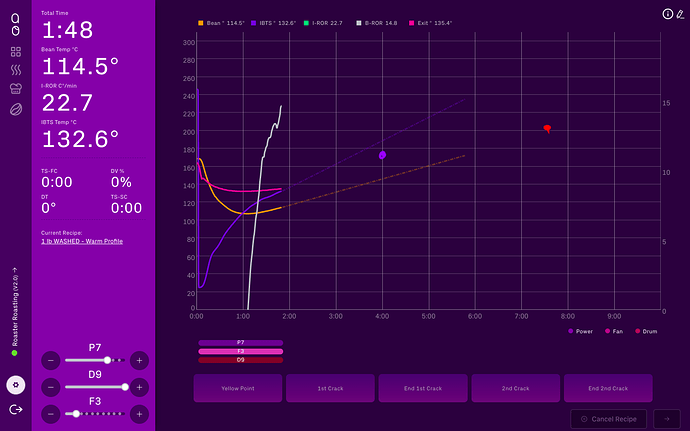 I like this idea of having those reference points. I haven’t tried the “phases” under the “prediction” setting yet so can’t comment on their usefulness yet.

@mcaillio, Any thoughts on what i proposed?

I’m curious about the predictors in the new version, I could be wrong and I only used it for one session but is it limited to bean temp? SIAP

There are separate RT3 predictors for Bean Temp and for IBTS. You must enable “RoR Prediction” in RT3 Config menu to get them to display. If you’re only seeing one predictor then something sounds odd… both are active during a roast on my Win10 installation. It may be a setup difference between our RT3 installations. I’ll check next time out to see what effect disabling “IBTS RoR” has on the Predictors. 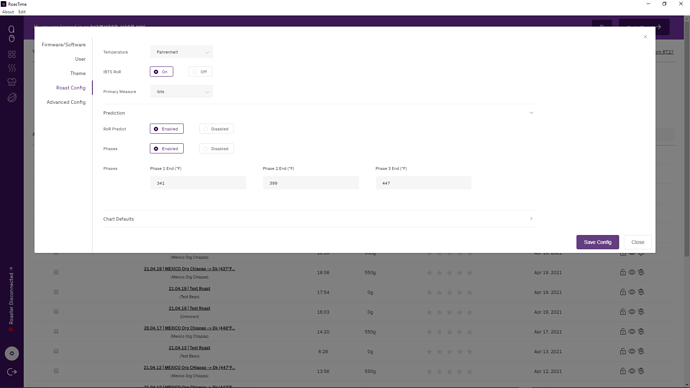 Ahh okay I see, we’re coming from slightly opposite ends. You want a target to aim at, I’m looking at where the prediction line crosses the phase change to see how the time is changing depending on the current conditions. If I’m long, I can speed the roast up, if I’m fast I can slow it down…

Aren’t we essentially doing the same thing? I guess I’m lazy…i don’t want to have to make sure I’m referencing the correct vertical line…

Yeah, I think you guys want the same thing - just 2 different ways to go about it. I can add it to the backlog to maybe make an optional view.

Thanks @mcaillio! Maybe it doesnt have to be either/or. Couldn’t a mark be added, or change it to look like this?