Roast based on IR bean temperature only, not time

Hello! I think this might have been asked before in the discussion, however I’m having trouble finding a good answer. I would like to use a recipe I created to roast, and have each variable (Drum speed, fan speed, and power) change when the IR temp of the bean reaches a certain temperature. With time having nothing to do with it! When you make the recipe it forces you put in a time under the AND------. But i don’t want time to have anything to do with it!? Can someone walk me through how to make a recipe, and roast it based on IR bean temp? Here is a screen shots of the recipe I have, with time @ zero for each one (cause I don’t care about time)… THANK YOU!!

I believe that you must put a time value. i use 1 minute for all triggers. There used to be a difficulty with F instead of C but that may have been remedied.

Why would you not care about time? I don’t have much experience with the Bullet, but I have 20 years of experience with first, a Probat knockoff 1 lb sample roaster, and since January of 2011, a Diedrich IR-1 gas roaster.

Roast time and the time spent in certain phases of the roasting process, is one of the most important parameters that can be controlled during the roast, if quality coffee is the desired outcome.

Ken, you are correct. Time is of utmost of importance. For the sake of finding an answer to this questions specifically, however, time is not of concern.

Set the time to a minute or after the turning point otherwise you risk your trigger going off as your temperature heads down to the bottom from preheat. I know it seems counterintuitive to have an AND there but it makes more sense when you think about it…

Or switch to Artisan… 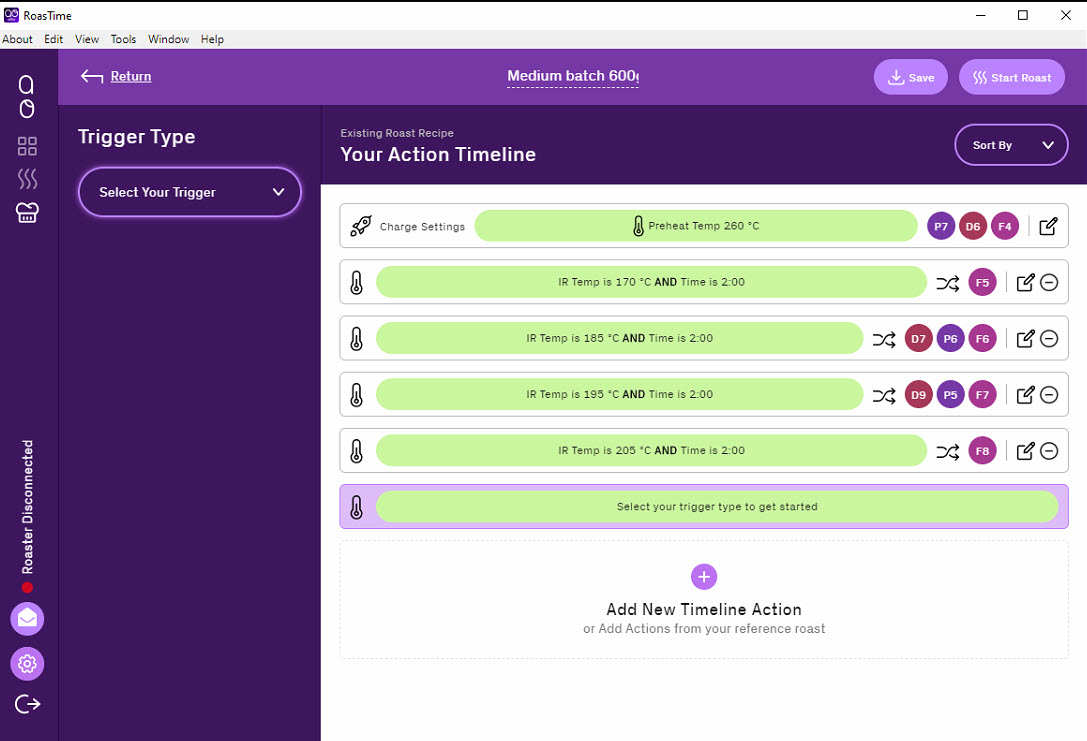 The odd thing is the trigger is just never going off. At any point. I am in Fahrenheit, I wonder if that is causing an issue?

I worked in Celsius so you may be onto something…

Hi Stefan,
Is this how you roast daily? With recipies?

Yes, if its a known bean to me. Then if I experience that the curve does not evolve as planned then I intervene and override settings…

Just to follow up. I think the issue was that the Bullet was in Celsius mode, and the RoasTime app was in Fahrenheit. The bullet also needed a firmware update, not sure if that helped or not. I eventually put everything in Celsius (roastime app and bullet and recipe) AND 2 min for each time interval, and that ended up working. Per the Aillio team, the recipe function is still in the Beta stage, so there are likely several kinks that need to be worked out.