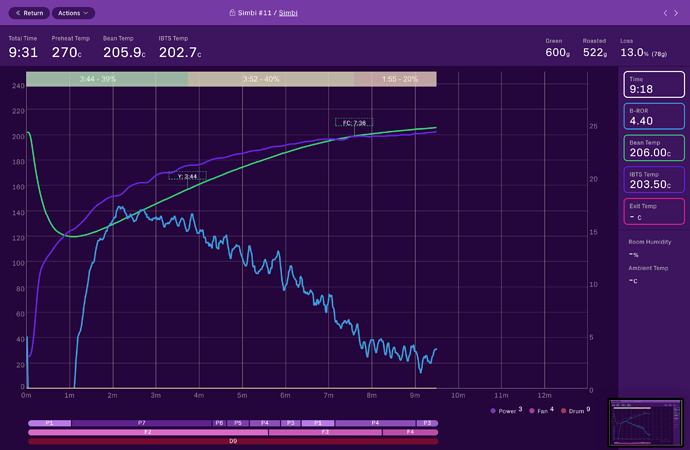 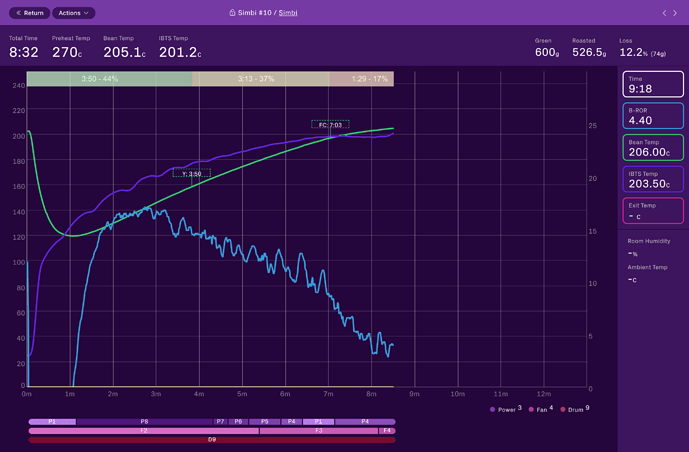 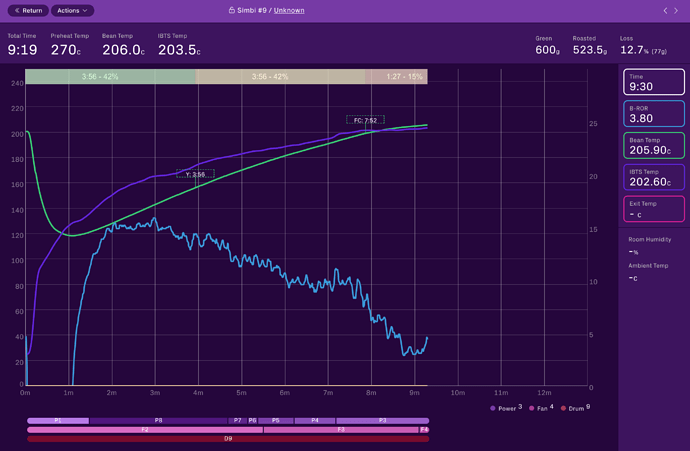 Why do you think the big taste difference between #9 and #11 is?

I just roasted these three 600g batches of a new Rwandan, and cupped them this morning. I honestly expected #11 to be the best one because I hit my temperature target and was able to smooth the ROR curve. But #10 ended up tasting fruitier and I liked it better (despite it’s short aftertaste).

But number #9 was strange. It had an odd almost greenish off-flavor, and tasted much worse than #10 and #11. (Even though the time and temperature are almost the same as #11)

Why do you think #9 and #11 taste so different? They were roasted about the same evening with constant green temps and environmental temps.

Ahh, this is very interesting! It’s great to see some roasting technique and flavor discussions.

IMHO the RoR of #10 follows Rao’s Best Practices most closely, whereas #9 is a classic example of spike/crash/flick that he teaches to avoid. #11 got baked out due to the cooling effect of the fan increase to F4 at the end.

Best Practices doesn’t support a power increase after FC. So it may be that #9 could actually be tuned to become the best if less power was used in the mid phase. Shorten up the P8 segment by 1 minute and see if that eliminates the spike/crash, and maybe cut power a little further in the last minute if needed?

Personally, this is what I love about home roasting. You can try all the quantitative solutions you want, but in the end it is a qualitative solution that is most important.

Green is an agricultural product, with many variables in them. If someone tells you “this is the best way to roast the beans” they should add, " in this environment, with this humidity, if you like bright coffee, and you use a french press".

I keep track of every roast, and try to make the equivalences you are making, and I fail consistently. I have been roasting for almost 20 years, and it is still largely a mystery to me.

So, sadly, this post just gave me a chance to expound on my belief in the uncertainties of coffee.

But in the end, if you like it, try to recreate that curve. But keep in mind, it may not be due to the curve…

Could the ROR slope have anything to do with it? Apart from DTR, delta temp and moisture loss, I feel the ROR at FC also has an impact on the taste of the bean. Earlier, my FC (following the declining principle) happened around 5 or 6 ROR (BT). Lately I’ve been hitting FC at a slightly higher ROR and my coffee now tastes better.

I feel the ROR at FC also has an impact on the taste of the bean.

So how does this higher RoR at FC influence your overall roast time? Makes it uniformly shorter? Some of the roasts presented for Royal’s Crown Jewels are also quite short (e.g. the Diedrich roast of this Colombian bean has FC @ 6:44, RoR = 15C/min with a 4 lb. charge weight). When I’ve tried roasts this short, bitterness has increased at the expense of sweetness, but maybe I was doing something else wrong too. Could you post an example that came out good?

I don’t have much experience with a lot of beans since we roast only local beans, most of which we process ourselves. In general, our beans do not have much bitterness, so, more than that, with a low ROR, the coffee has emerged somewhat dull and lacking character. Since I roast only 1KG batches, with a low ROR at FC, the roasts have extended longer and that I guess results in somewhat baked beans. When we first acquired the Bullet around December 2019, my ROR at FC hovered at around 5 to 6. With more experience, I have managed to bring that up to 8-9 and the coffee has ended being brighter than earlier.

Attaching this profile where my ROR is around 9 at FC. This being a oily dark roast for a client, the curve is not optimal. However, for a lighter roast (Light to medium), due to the initial momentum, I can enter FC at a slightly lower ROR of 7-8 and carry on with a subtly decreasing curve till end of roast. I have done this with my lighter roasts and they have come out pleasant and quite fruity. 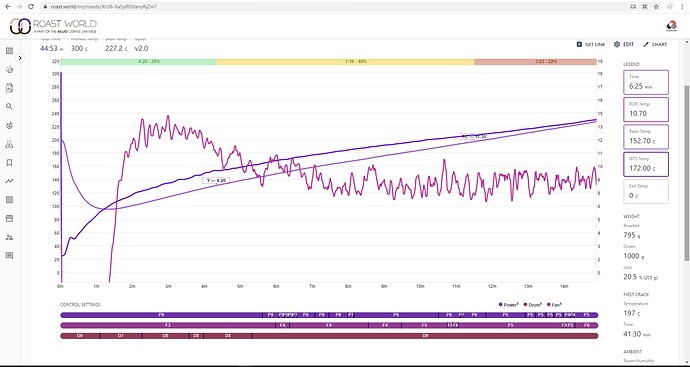 I just cupped the three again, and I still feel that #10 is the best. #11 still exhibits a hollowness and #9 doesn’t have as much flavor or as good an aftertaste.

Thanks for the feedback!

I had been having troubles with crashes at FC in general, so we decided to try the gas dip for these batches. Considering that theses were the best we’ve gotten so far from this bean, we may continue using the gas dip method.

I didn’t see #11 as baked before, but now that I’m thinking about it, I think you’re right.

in the end, if you like it, try to recreate that curve. But keep in mind, it may not be due to the curve

LOL
Hilarious, love it… but it’s also a bit scary then, being a newbie and wanting to learn some useful tips… which may or may not turn out to be useful

I know I’m months behind this post, but I’m really curious as to all 3 roasts starting at P1 for the first minute. I haven’t heard of or seen this approach before, but then again I haven’t followed the forum that closely.

Thanks for any feedback!

It’s called a “heat soak”. You warm the greens slowly before hitting them with roast-level heat. Avoids scorching. Look for a couple posts from @quartzglen describing how he does it. Maybe Feb 2020… ??

Not a universally accepted method within SCAA presenters.

Thank you for your explanation!

As Bruce said, not something typically needed on the Bullet due to the induction heating vs gas as heat source on larger drum roasters - but don’t let that stop you experimenting; I’ve toyed with it as a way to prevent a high charge temp from blasting you past your aim points for YC and FC which might happen if you left your power full on early. The easier solution of course is to lower the PH, but sometimes you forget…

I was told by a local coffee supplier that this is a good method to use on natural process coffees to keep from burning the sugars that remain on the outside of the beans. He uses the bullet as a sample roaster.
I’m a newbie so I’m still trying to figure this out. I have been doing this with the natural Brazil I have been roasting and it has helped the outcome of my roasts.

All 3 of those roasts also starts at a rather high PH temp 270C/518F for a 600g batch size. At that PH temp if using a high P after charging the beans will scorch/burn on the outside of the bean while the inside is under-developed. It’s like searing a steak on a very hot cast iron pan - you get a nice crust but juicy rare/medium rare on the inside. That’s what you want with a steak but not with your beans