I have been roasting Ethiopian beans, usually 500g, and my roasts always start out fine then typically spike in temp instead of any reasonable steady ROR…any general recommendations for what’s going wrong in my profiles? I have tried following similar profiles of roasts posted and can’t even get close. sometimes I nail it and the coffee tastes amazing but 8/10 roasts are just baked and very bland. Will post two sample roasts that did not taste good at all. 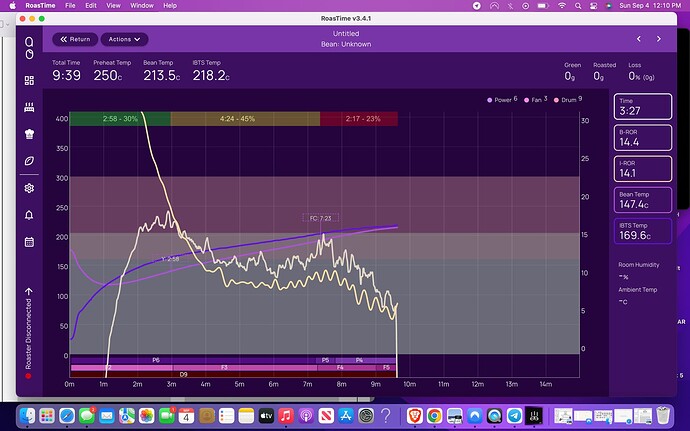 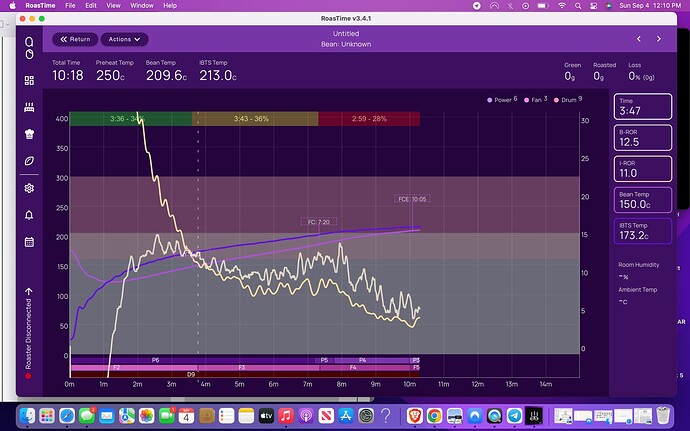 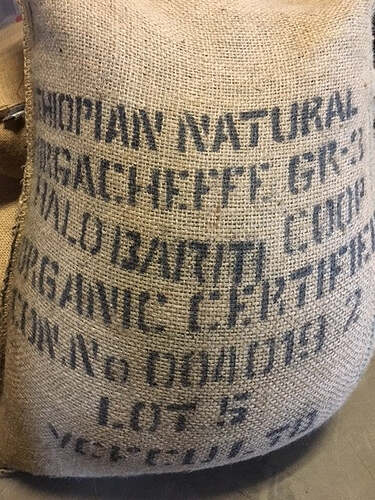 Halo Bariti is marketed and officially labeled as a Yirgacheffe, but in truth, it is grown too far south to be Yirgacheffe and doesn't share many attributes with a Yirgacheffe. This is a fairly new fair trade organic co-op from a previously...

These beans are Yirg Halo Bariti; I am roasting on a balcony in Arizona at night

Hi -
I’m far from an expert, but just my two cents on something you could try. I’d shoot for a few more power reductions throughout the roast to keep the RoR declining. Depending on how these beans respond, might need a decent power cut prior to FC to avoid that spike. Some current yirg’s I’m roasting have a very violent FC so need to cut the power to P3 at around 194 to avoid a nasty flick. You profiles seem to be indicative of too much mid roast heat that flattens them out…

Again, I’m far from any level of expert, but might be worthwhile playing with the above milestones and fine tune the profile from there. Hope this helps
Best of luck!!!

Unfortunately there are many ways to do this and it’s a matter of finding what appeals to you. In the 1.5 yrs roasting on the Bullet (90 roasts in) it’s been a lot of trying things reading through the forums on old posts etc.

Enjoy the journey and in the end it is what appeals to your palate.

The naturals from Ethiopia are a bit difficult. First of all, you’re having FC way early and that’s probably because of the rise in temperature prior to it. First things first. I noticed you’re preheating more than me and have a lower spike in the beginning. That might be because you’re roasting outside which can be tricky for the probes, especially if there’s some wind or temperature changes. Now, about the beans. The natural Ethiopians will usually release an enormous amount of chaff before and during yellowing. That causes the initial spike in temperature and a harsh fall after. Once it stabilizes and starts expanding before the first crack that’s where the temperature starts rising again. The only solution to this is to charge high, which for me is 230c (160c drum) for 500g and slide down carefully. You will certainly hover at some point, but hovering is different from rising in the middle of the roast. I made a little bit of confusion with a and e, but you can check out my Yemasira 8 profile for 500g. Or any of the Zege profiles, apart from the first one, which all turned out fine although a bit overdeveloped for my taste. The solution to this is dropping them sooner. They’re both naturals from Ethiopia, Yamasira being from Oromia, so closer to yours, and Zege from lake Tana. Ethiopian naturals give their best at around 10-15% development, but with a contained delta, which you should be able to attain if you don’t come in too hot into FC. I had the best cups dropping them during first crack. I think you can overlay any profile from Roast World. Once you overlay it, you must concentrate on making the adjustments to follow the ROR and I-ROR curves and disregard everything else. You can’t just put the same settings and get the same result. For 1kg batches, which also turned out fine, I hovered a bit more, so I’ll probably turn up the preheat. The other very important thing is to never listen to the Bullet when it says charge on the first roast. Preheat at least 23 minutes for a 500g batch and over 30 minutes for 1kg. Last, but not least, if you want to see what not to do, you can check out my 800g Yemasira 7 profile that’s similar to yours or the first Zege. Those did not turn out well.

Some things that you may want to consider trying:

At the same time, work out the ideal preheat temps, power and fan settings for your own setup as everyone’s ambient temperatures, green temperatures, and relative humidities are different.