If I pick IBTS for ROR in the config will my bean temp still be read by the IBTS?

Currently both I-RoR & B-RoR are plotted. Selecting IBTS places the Markers (Yellow, 1C. 1Cend, etc.) on the IBTS temp plot; choosing Bean Temp just locates those markers on the plot for the Bean Temp. Either way you’ll (at least currently) have both RoR curves.

I’m confused by this reply, Bruce. Aren’t the IBTS and “bean” plots just temperature plots? The RoR is a rate, right? Change in temperature per minute? There’s only one RoR curve plotted. Or am I missing something here?
Terry

The RoR is a rate, right? Change in temperature per minute?

Yes, that‘s correct, but you can plot it for BT (that‘s usually used) and additially for ET

Yes… RoR is the rate of change of IBTS & Bean Probe temp graphs in degrees per min.

Depending on your installed version of RT3 you should be seeing a smoothed I-RoR plus B-RoR. The latter (B-RoR) should be unchanged from what you’re accustomed to seeing.

RT3 ought to auto-d/l a newer version then offer to update RT3 to that newest version (RT3.1.1).

In use during a roast, I-RoR starts out off the chart and drops into view (at least on my usual profile) at about 3 min into the roast. That initial off-scale behavior is caused by the initial steep slope of IBTS. That means I-RoR is such a large value initially that auto-ranging of Y2 set a scale so high it made data that arrives later unusable because it was compressed near the X axis. 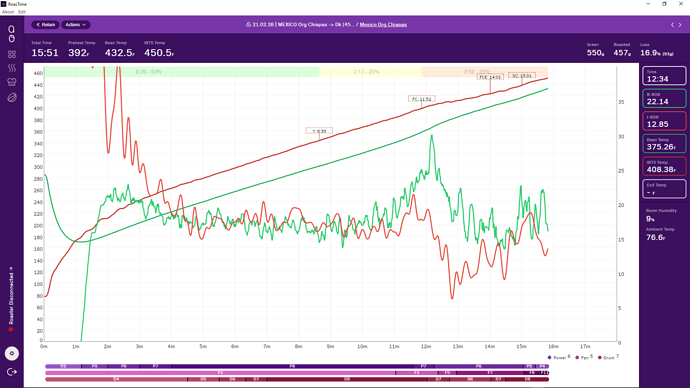 I don’t see I-RoR on recent charts I view on R.W… probably coming soon, but for now you can view the newer charts in RT3.

You’re right, @bab . This isn’t available yet in RW. However, we do have plans to get this over to RW. Currently, I’m caught up with some support-specific work though. So this will more than likely be added to RW after that.

Having both ibts and bt RORs visible has been one of the best things of RT 3+. I make my P and F changes based on IBTS but as you mentioned, the initial few minutes of the i-ror is unusable. Post yellowing, it is a useful tool. So, my recent roasts have been based on b-ror initially, then i-ror and a delta temp, dtr and target temp combo, which provides a very holistic approach, IMHO.