In the older versions the playback function was not perfect, but it works. In the latest version the playback sucks. It does not synchronize, most of the time you cannot switch it on because “the roast is already started”.

Does anyone else find that it often won’t start on the correct settings despite being in “playback” mode? For example, if my playback recipe calls for initial settings of F1 and D5, it will launch playback using local default settings for F and D. If it’s F2 and D7 on the bullet that’s what it starts the new roast with regardless of what’s being “played back”. This can be avoided by remembering to locally set launch settings for beginning Drum Speed to one that matches the drum speed used in the roast you wish the re-create, however you can’t set a default launch F speed of 1 for example, and the only way to achieve an actual launch at a Fan Speed of 1 straight out of the gate is to create a recipe. Anyway, it would be great if playback just actually started with the Drum and Fan settings actually used during the roast in question.

Hey @peter425p - Can you detail a bit more on what you mean it doesn’t synchronize? I don’t think there were any changes in 3.4.1 vs any recent older version for playbacks. There currently is no guard against starting a playback after a roast has started, so I may need some examples of where this is happening so we can properly debug your issue.

@jeffburling436v Thanks for the report. Does it switch to the settings a couple seconds in? It may be a second or so delayed, but it should happen at some point in those initial seconds. If not, we can create a bug and take a look.

No it doesn’t seem to correct itself unfortunately. It seems to only begin on what settings I have set locally on the machine. Playback to begin at P0 and F1 in particular don’t work because you can’t set the bullet to use those upon start. Drum speed behaves similarly and will begin with pre-set local drum speed setting. I am still running 3.4.0 fyi.

Update: It is only the Fan Speed that does not begin at F1 during playback of a recipe that begins on F1. It will always begin on F2 for me.
Power and drum speed have been working however I do set my beginning drum speed locally on the bullet just in case.

I frequently have this problem with power setting during playback. I start my roasts at P9 but when I use playback it starts off at P6. I’m using 3.4.1

Yeah, I’m also on 3.4.1 and playback has messed up twice already. In the screenshot, you’ll notice that the playback completely messes up the Power / Drum settings.

I think P2/D3 were default settings outside of playback.

Fortunately, I had another pound left of this bean to work with. But if I didn’t, then I’d have to refund an order.

Please let me know if you need more information. 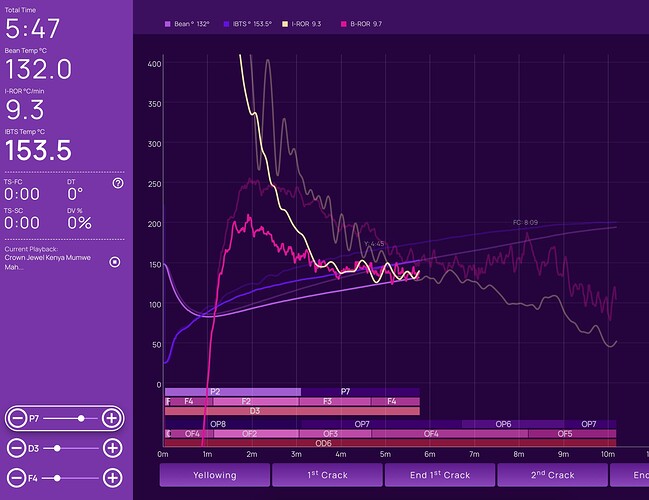 Any thoughts? Sorry for tagging, but I need to do some batch roasting soon, and would like to get some help before doing so.

I’ve since stopped using playback because of its inconsistencies and just use recipes instead. They’re pretty bang on, just no overlay though but I’m finding it’s very consistent.

… and just use recipes instead. They’re pretty bang on, just no overlay though but I’m finding it’s very consistent.

I never tried using the Playback which uses only Time based changes. You should be able to use an Overlay with a Recipe. I’d feel like I was flying blind without the Overlay even with a Recipe I’ve used many times.

Your problem might be if you changed your default power setting when entering roasting. If it was previously set to P8 and no other power commands where issued, it would stay on P8. If you change the default to P2 then it will stay on P2 until your next change. Playback does not take this into account.
I would try the recipes where you can set the starting power / fan / drum.

Can you elaborate more what you mean by “changed your default power setting when entering roasting”?

I’m having the same issue.