Several people (@bab, @mw104, …) have mentioned preheating beyond the bullet’s first announcement of “Charge”. I would like to try this too, but after a few minutes my machine tends to become impatient and sometimes spontaneously announces “Roasting has started”. My workaround has been to repeatedly press PRS and cycle quickly through roasting, cooling, off, and back to preheat (probably incrementing the roast counter with one very quick roast.) Anyone else see this or have any better solutions? I’m roasting under a stovetop vent hood on a V2, fw 553, RT 2.5.5 stable. Thanks! - Brad

I’ve only seen my Bullet advance from Preheat to Charge mode on its own just one time. I used the old Australian recovery method- I pretended to be an ostrich and buried my head in the sand, then I cycled thru the modes as you did to Preheat and pretended it hadn’t happened.

I suspect it has to do with a sudden drop in IBTS or Bean Temp (in fact that almost has to be what caused it). I forget which of the 2 is used to trigger the start of roasting and how much the drop has to be.

If you had a direct connection from roaster exhaust to an in-line extractor fan, that could be allowing too much air with no beans in the drum, but that’s not your case.

Something that might apply is if the plug for the bean chute is off, perhaps with the funnel in place. Having that path open affects air flow in the drum and perhaps caused the trigger.

There has also been a couple instances reported here on R.W recently of Bean Temp doing odd things, as though the thermocouple (Bean Temp) disconnected or had a problem with electrical noise. It should show up on the chart during Preheat as a sudden change in Bean Temp (which presumes the f/w triggers on Bean Temp).

You also have the option to change to f/w 558. I don’t recall any mention of Charge → Roast detection changes when @jacob mentioned details of what had changed, but you could ask support. In fact it might be smart to open a Trouble ticket anyway.

Beyond that I can’t guess what has caused the trigger. I didn’t have a repeat so there was nothing to try/test. Hopefully @jacob will see this and jump in.

Thanks Bruce. The bean chute plug was installed during each incident. I do see small temperature fluctuations, initially overshooting to about 235C, then dropping back and oscillating slowly within a few degrees of the 230C preheat setting, which I assume is normal. Never seen a sudden, significant temperature change. Since the issue is intermittent (maybe 3-4 times in 20 roasts) and everything else is working very well I’d be reluctant to change f/w just for this unless it is an indicator of something more serious.

I second what Bruce said.
I had this a couple of times and would attribute it to a disturbance in airflow.
I vent to the outside, no inline fan or cooling tray mods.
My vent line is about 3ft long and this is it.
Off and on it’s fairly windy up here in the mountains and that can trigger an “auto roast”.
I apply Bruce’s “ARM” and all is fine.

I’ve had this happen a couple of times so far in my 4-6 weeks of being a R1 owner. It happened only a couple of times and each time I cycled back to PH. I should add that I’ve also had to replace my thermocoupler (tons of noise in ROR readings) and with the new one in place I havent had the premature Charge since…then again I only have about 8-10 roasts with the new thermocoupler installed.

Hi wbherndon. Was this the type of noise that you were getting? I just started having this issue and it seems to be causing the roaster to almost immediately enter roast mode after announcing charge. I have only done about 30 roasts total on my Bullet. 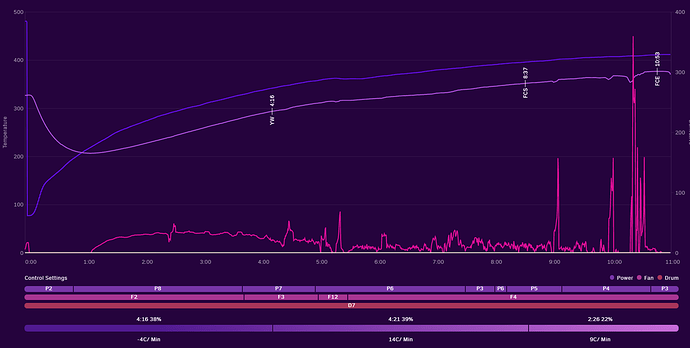 Hey Jared here is a link to what mine were looking like before I replaced the therm:

I contacted Aillio support and got a timely response from Matt. I was purchased my roaster from Sweet Marias annd Matt brought them in on the conversation. After some prelim troubleshooting SM got me a replacement sensor quickly and sent me docs walking me through the repair. Now my R1 seems to be working as it should. I’ve only done a handful of roasts with the new sensor installed but so far all is well and I havent had the premature charge issue.

I cant remember if it was Aillio or Sweet Marias, but during the troubleshooting phase it was mentioned that the latest batch of roasters has had issues with bad thermocouplers. Seems like others have reached out with similar issues.

I hope this info helps you with getting your machine sorted out.

I see my profile is kind of hard to read. If you need me to then tomorrow I will take a stab at doing a screen grab and uploading it. I’ve yet to post much of anything on these forums so I can try to fuddle my way through it.

Thank you for posting that profile and for the information William! I took the control panel off to make sure the thermocouple wires weren’t being pinched by the housing and to check that all connections were secure (as Jacob mentioned in a similar post to this one). I have to say I did not see any issues though. I was able to successfully complete three more roasts without issue after going through that process. I will keep an eye on the bean probe readings and reach out to SM/Aillio if this issue pops back up. Thanks again and I hope everything is good with your machine now!

The only time that I’ve seen this happen was when I opened the gate to wipe off the glass and pulled the trier to clean it before starting the roast which triggered the roasting has started. Now I make sure to do anything like this before the roaster is pre-heated.

I’ve seen this regularly if I’m in “replay” or “overlay” mode. If I don’t load any background profiles, usually, it will just continue preheating. (And I always preheat at least 45-60 minutes prior to my first batch)

If you make it past the first couple of “charge” announcements, usually you are good to go.

The workaround is as you say, cycle through back to preheat. And I always wait to load my playback or overlay until i’m actually ready to start roasting.

Very interesting! I always use “overlay” mode to have some reference for the new roast. Thanks @andrewcoecoffee I’ll try starting overlay later.

After following the suggestion of @andrewcoecoffee and preheating without activating overlay mode, I’ve had zero trouble with premature “Roasting has started”. It’s easy to activate overlay just before charging. Thanks for this simple workaround! @matthew this is minor but might be worth investigating?

Thanks for the info, I will take a look.