Now that I’ve done a few roasts with RT2 (being a super late-comer, still using RT1 until April) I have a couple of UI requests/suggestions, and I think these would help other users. Sounds like a lot is on the way in the next update, but I couldn’t find a list of what changes are expected so just in case.

I’ve attached a screenshot which I think illustrates it better than typing. Thanks! 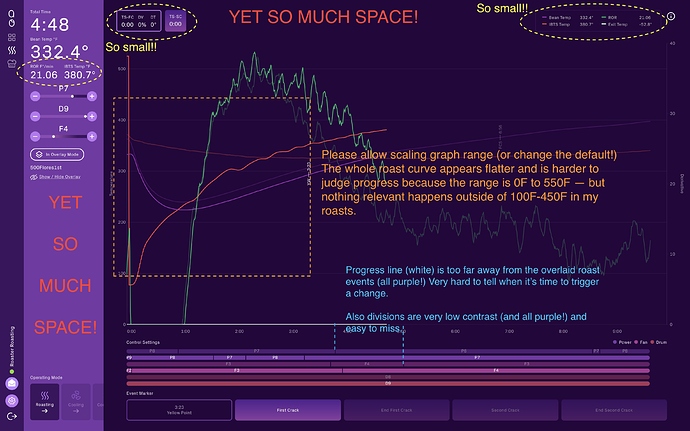 It is very very difficult to make a fully responsive desktop app that will work well on mac linux and windows. The app is designed so it can be used at a lower resolution (including small cheap laptops) and then there is no more screen left.
I agree is should be improved and have asked Matthew to look into it. Thanks for your feedback!

Thanks for the screenshot, that is very helpful. I am working on making better use of space in the coming version, so appreciate knowing it was warranted. I will see if I can fit in custom x/y scaling in there too.

Thanks @jacob! I agree that small cheap laptops are a better way to go. I would love to have a dedicated laptop for the roaster but have to share another machine for now.

and @matthew scaling would be so great if possible. Really looking forward to the next update.

+1 for scaling BOTH axes independently before roasting, increasing font size, and changing colors

Agreed, being able to read curve values with mouseover would be great.

And if I can add one more request @matthew — RT1 had a feature that when in overlay mode, it gave a running delta between the past and current roast temperature curves. It was really useful for knowing at a glance how things are going when trying to replicate a successful profile.

I have custom X/Y axis configs done already and the rest of your feedback on the roadmap. The real time display on the curve is a bit difficult as the graph is constantly re-rendering. I actually took it out for performance reasons, but maybe it could be a config option?

Hopefully you have Overlays on your list. I had found an occasional problem with my V/1.5 config roaster where time of events (Power, Drum, Fan) didn’t correlate with time of the graph. It wasn’t a huge displacement but noticeable. Recently I upgraded to a V2 power board and for whatever reason the Power event time correlation with the graph is worse with the V2 board than the V1 board… anywhere from 20 sec to over a minute. Fan & Drum have less or no error.

Also I’ve seen hesitation in the elapsed time clock (as though the Bullet controller had a comm delay). Most of the time it runs smoothly, but on one occasion I saw as many as 4 or 5 clock updates that hesitated, then it smoothed out and seemed to be fine. Time was correct when it smoothed out.

And I believe Mathew Yau has mentioned that I’ve seen a comm issue where I get a 1 sec (?) sound alarm that is apparently comm related. Worst case I’ll find power set to P0 (I can immediately reset the power), but it can also leave power unchanged. There’s no difference between V1 or V2 power board (happens with both) and I have the newest control board in the Bullet. It started when there were mods going on to accommodate the V2 power board mods. I mention it only because I have no way of knowing if it’s f/w or s/w.

I have roasted completely in F when developing v3 so we didn’t run into any of those issues again. In regards to overlay, this is another thing I spent quite a bit of time refactoring. I also added the current power/drum/fan setting on hover of the graph so you can better see the value.

If you don’t mind the RT->RW connection not working, I am open to have a few of you guys early testing v3.0.0 in the coming weeks. The RW platform is being re-hauled right now and the new version of RT syncs to that development version, so your roast/etc data will not show on the current RW, but would when the new one is released.

I’m good with those conditions. Pls tell me where/when to find the v/3.0.0 files.

Btw, °F/°C issue only shows up when reviewing roasts and advancing through the charts using the arrow icons.

@matthew I’m also on board with testing v3. Would it be possible to manually bring some roast data into the new platform to test the overlay functions? As you may have noticed I use them a lot.