I just got a pound of Java Dry Process Kuningan Robusta from Sweet Maria’s on a whim.

Has anyone tried roasting robusta before? I was thinking about taking it a couple of snaps into the second crack, but am eager to hear anyone’s experience.

Only as a blend in Liquid Amber. All roasts were into 2C. I’m not a fan of robusta, but blended with the rest of the ingredients in LA it is spectacular (it’s what gives LA the crema).

Well, here is the roast: Robusta 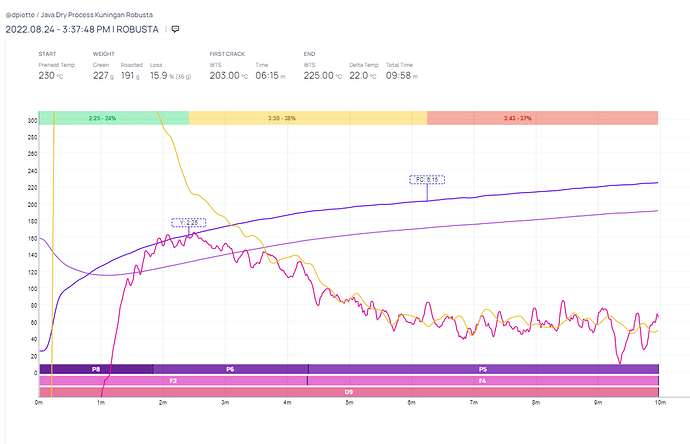 I think I roasted it too fast. I only did 1/2 lb, but used my 440g recipe. Got to first crack really fast, but the cracks then sort of petered out. I never did hear second crack, but let it roast 3’43" past the first. It looks very uneven. 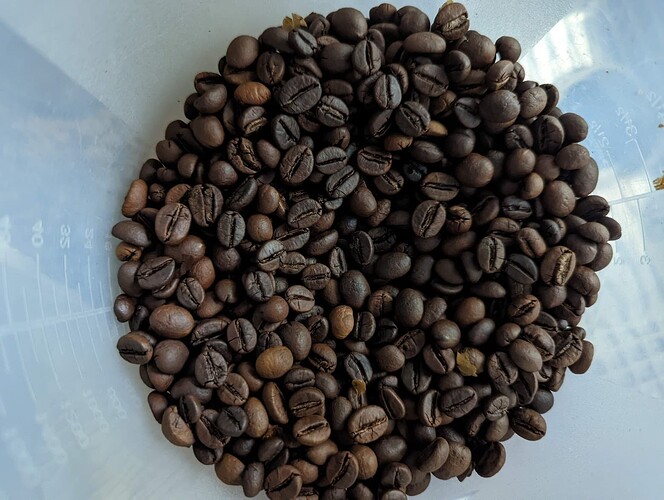 I will let this rest a while and then see how it tastes both stand alone (!) and as a blender.

Yeah, pretty high Preheat for < 230 gm of greens. That moved very fast. But then that’s from someone who roasts slower than most.

Doesn’t look like it got to 2Cs. I would expect that to happen somewhere north of 440°F, though robusta does everything differently than I expect- especially color. I see some uneven color which may relate to batch size but more likely is just part of uneven grading of the unprocessed cherries.

None of that matters if you like the taste. It’s always about what ends up in the cup!

I agree. This is supposed to be high quality Robusta from Sweet Marias.

But I am not too hopeful about the taste. Maybe I will be pleasantly surprised! It was pretty cheap ($5.95/lb)

I may brew up a clever dripper with this tomorrow - just to continue the experiment.

Do let us know how it cupped. Robusta is usually used in a blend to provide some structure from what I understand.

I brewed up a cup of the robusta this morning.

This seems like damning with faint praise, but it wasn’t nearly as bad as I thought it would be.

It is bitter, but not overwhelmingly so.

There is sort of a cardboard box type of flavor, but in such a way that makes you think of just old coffee.

In many ways it reminds me of the Folger’s coffee that my father would drink when I was a kid in the '60s. He used a percolator, and I think most of that canned coffee was indeed, robusta.

So it was kind of a trip down memory lane.

I used 16g per 250 ml water, in a clever dripper (James Hoffmann technique, which is what I am now using for all my non-espresso coffee).

I will let the beans rest for a while, and try it again in a week. I will probably mix in some to my espresso shots as well, just for fun.

I could not recommend it as something you would want to drink every day, but if the world loses our arabica, we will have something to fall back on.

I listened to a podcast about a year ago talking about how the quality of robusta is increasing, and it may ultimately have to be a substitute for arabica. I can’t remember which (probably an SCAA or SCA podcast) but I will try to find it and post it here.

BTW: Robusta has about 40% more caffeine that Aribica.

Pour the water in first, the the coffee. Stir until it’s all wet. Steep for two minutes, then stir again and release. VERY easy, and he says it is a much faster draw-down instead of coffee first then water.

Yes, I am zooming a bit right now…

@billc and @dpiette - that’s rather interesting. Ratios are the same as coffee in first I take it? I might have to try… but then I love to see the coffee bloom when it is coffee in first

EDIT: just watched the video … very interesting… will need to give it a try. Someday I’m going to need a new more precise scale

I get a commision on everything that you buy from Amazon. LOL

I get a commision on everything that you buy from Amazon

The last several things added to my list was because of you!!

Hah! Interesting use of the Clever. Apparently less fuss & more consistent than what I’ve been doing with the Melitta. YouTube found several other vids with the same/similar approach.

So I just brewed a cup of my Peru Notra with Hoffmann’s technique. It’s a cleaner and almost sweet cup. Quite different than using the regular, bean first, some water and let it burb, more water then stir and steep, then release after a total of 4 mins. The latter method for me had a fuller mouth feel (to borrow from wine tasting) which I also like. But I can see how Hoffmann’s technique might lend itself to a dark roast well to minimize any bitterness due to extraction time. Will try it tomorrow with the dark roasted (EV 10) Yemen or when emphasizing the fruit in the cup is desired. Fascinating. Love these types of discussions

Now we need to talk about adjusting roast parameter based on various brew techniques.

I still do most of my coffee making with a spring lever espresso machine (QuickMill Achilles) and tend to like a city to full city roast. I seldom get out of the first crack all the way. I usually make milk drinks (cappuccino, I suppose) for my sweet ever lovin’ and my self every morning.

I will then have one cup of filter coffee to drink as I am starting to work. Now it is the Clever Dripper, as brewed above. I use the same coffee, but am thinking about maybe roasting a bit darker, just as an experiment. I bought some Yemen the same time I bought that Robusta, and will roast some this weekend, but I know that the Yemen needs a nice long rest.

Another use for Robusta is Viet Nam’s ‘Cafe Sua Da’ iced coffee.
Viet Nam is the world’s larget producer of Robusta coffee beans. 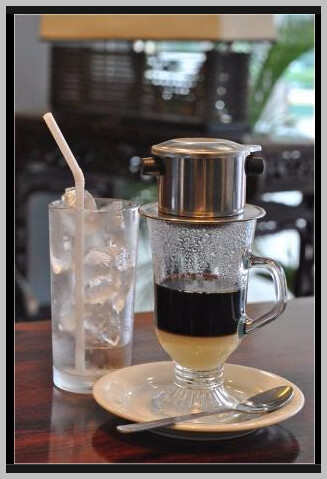 It also sometimes goes by the name of "Cafe au lait"in Vietnamese restaurants.

I have heard that some people are brewing the coffe for this with an Aeropress.

I did a little experimenting over the w/e with my Yemen Matari dark (EV 10). Saturday I did a cup using Hoffmann’s method with 2 min extraction time. It was a clean cup but a bit lacking in the body that I liked about the traditional/original method. So on Sunday I made another cup of the Yemen using Hoffmann’s method but with a 3 min extraction time - it hit the spot for me.

This morning used the same Hoffmann method with 3 min extraction time using my Sumatra Aged 5 yrs Nusantara (EV 14). Wow… it was a good cup and accentuated the nuanced complexity of this aged bean.

@billc that Vietnamese “Cafe au lait”… I used to drink a lot of it in college as my apartment mate for 2 yrs is Vietnamese. I still have that contraption but I don’t use it any more. Can’t tolerate cow dairy anymore