I downloaded and installed RT 2.3.1 beta, mainly because I was interested in recipes. I ended up not using the recipe feature, though.

Q2: Is the time on a time & temp trigger intended to be when elapsed time is greater than ?

Q3: Choosing bean probe temp or IR temp with every temp trigger is error-prone – because it defaults to bean probe and I want to use IR temp. Could the choice be moved out of the trigger to settings, or could it be made sticky?

Q4: For IBTS-equipped Bullets, could we lose the “drum temp”, or rename after charge? I expect everyone with an IBTS is using it for the temperatures of main interest.

To the “IBTS equipped lose the drum temp” comment. I wasn’t sure I was understanding that correctly, so I’ll ask. Are you are not wanting to see data from the thermocouple probe(s)?

My thought is that I always want thermocouple probe data as a backup to IBTS. IBTS is still developing in its use and performance as Aillio knows. It can be prevented from operating properly if an obstruction gets in the way (which users are reporting that it still can). So for me, I prefer to have both thermocouple probe and IBTS data in this particular roaster.

My comment was more to the point of the name “drum temp” – My understanding is that IBTS shows drum temp until charge, then it’s the “real” bean temp (or at least closer than the thermocouple).

Your understanding on that is correct, as far as I know. I agree that the labeling is confusing.

I haven’t used the recipe feature, yet, so I’ll leave most of your Qs to people who are better suited to answer. However, for Q3, I think a sticky or user defined default setting sounds like a good idea.

For Q5, you can set a pre-heat temp in the settings menu of the R1, itself. The problem there is that there is only one setting, which has to be changed (potentially) for each new roast cycle.

I second the request to change the “drum temp” label when it’s really the IBTS Bean temp. I know that’s what it is but I still find it confusing and have to keep reminding myself. this old dog has trouble learning new things, sorry! 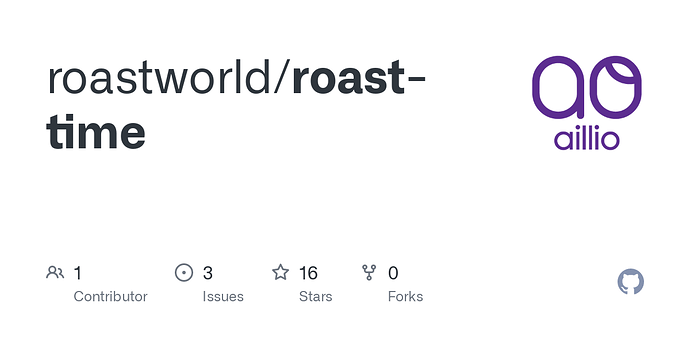 Contribute to roastworld/roast-time development by creating an account on GitHub.

Or at least I think that’s where one should look. I had been trying to use the about>update function in RoastTime, but that doesn’t respond.