RT: Roast do not save after clicking "cycle to the next mode"

I’m running 3.1.5.
Roasts aren’t saving at all. I did two batches and as soon as I hit PRS to go to cool mode the software would ask if I wanted to “Cycle to the next mode”, but it would not save the roast I just completed. This had not been an issue until a forced update 4/13/21.

Welcome to RW! I had a RT problem yesterday as well. On my 2nd of 2 roasts, RT did not start logging after charging. I closed and started RT and then it started logging but lost the first two minutes of data so everything was skewed. First time this ever happened and not sure if these are related to latest update.

Can you try using the “PRS” button on the roaster instead of that button and see if that changes anything? I will do a bunch of roasts again today and see if I can replicate. I did not encounter that issue upon testing. 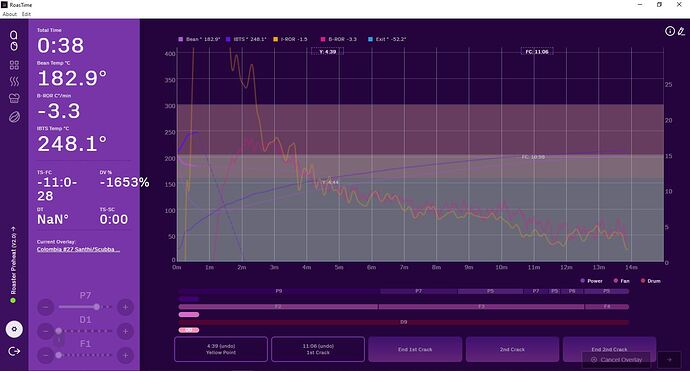 Thanks for reporting guys. I am out trying to replicate now. Will try to get a fix out today.

Do one of you mind jumping on our slack? I am having trouble replicating this behavior.
https://join.slack.com/t/roastime/shared_invite/zt-h7qicu0g-E_u1DsYGRmLXEQ0czoLweg

Released v3.1.6 which I hope solves your issue. I wasn’t able to actually replicate it, but I found some potential culprits. Let me know if it rectifies for you!

Just roasted on 3.1.6…no problems using the “Cycle to the next roast” choice on RT, but I do add a step in front by choosing “Go to last roast” to edit for the weighed roasted coffee, then choose the “Cycle to next roast” (not sure exactly worded this way).

However, I am still “suffering” from the same problem since RT upgraded to version 3 back in October…RW does not reduce my inventory by the weight of the roasted bean, although it does correctly add to the weight of the same bean as roasted. I still have to manually adjust downward the amount of beans roasted.

I have a similar problem. My last roasts using rt3.1.4 and 3.1.6 were not saved. They do not appear in my roast list and just seem to dissappear, no matter how I proceed.

@cees if your roasts still aren’t being saved in 3.1.6 you might want to jump onto slack at the link provided by @mcaillio above and post there under the “roastime” channel as Matt doesn’t check these forums regularly. I have roasts not saved in 3.1.4 last weekend but I haven’t had time to roast this week yet so can’t speak to 3.1.6.

Hey @cees - As @blacklabs said, I am more active on the slack. Would love to have one of you on there to walk me through because I can’t for the life of me reproduce this issue. I cycled through 10-15 roasts on 3.1.6 testing yesterday and didn’t run into it. Any details are much appreciated.

Here are a few quick questions though:

Were you using 3.1.5 and not 3.1.6? They were released less than 24 hours apart and 3.1.5 had the issue.
Do you start the app from preheat?
Do you cycle via the buttons in the UI or roaster?
Does it happen on every roast or after a certain amount?

I always use the buttons on the Roaster also when this issue occurred, after 5 batch Roasts on v3.1.5 Roasts did save don’t know what changed. Since the new version v3.1.6 I haven’t faced this issue again.

I just did a test with 3.1.6 doing a test roast (empty drum) and the session (nearly 8 mins long) was recorded in RT and RW. The “cycle to next” also seems to work for me where it would initiate the PH phase. Will run a real roast session now.

Issue resolved (first chance to roast since I first reported it)

Thanks for the quick action!

I had this problem, but due to my error pressing wrong button on Bullet panel, so one of my roasts wasn’t saved. I have all the data handwritten on a log sheet as I realised straight away it wasn’t saving as a profile roast.

I am pedantically wanting to save this roast in my list for consistency and backwards analysis.

Thinking randomly, can I do a “roast” with no beans to try and replicate the data from the logsheet and save that as the missing roast profile name? Will that hurt the Bullet?

Assume there is no other way to manually add a roast profile to My Roasts?

My error occurred in trying to do back to back roasts the first time.